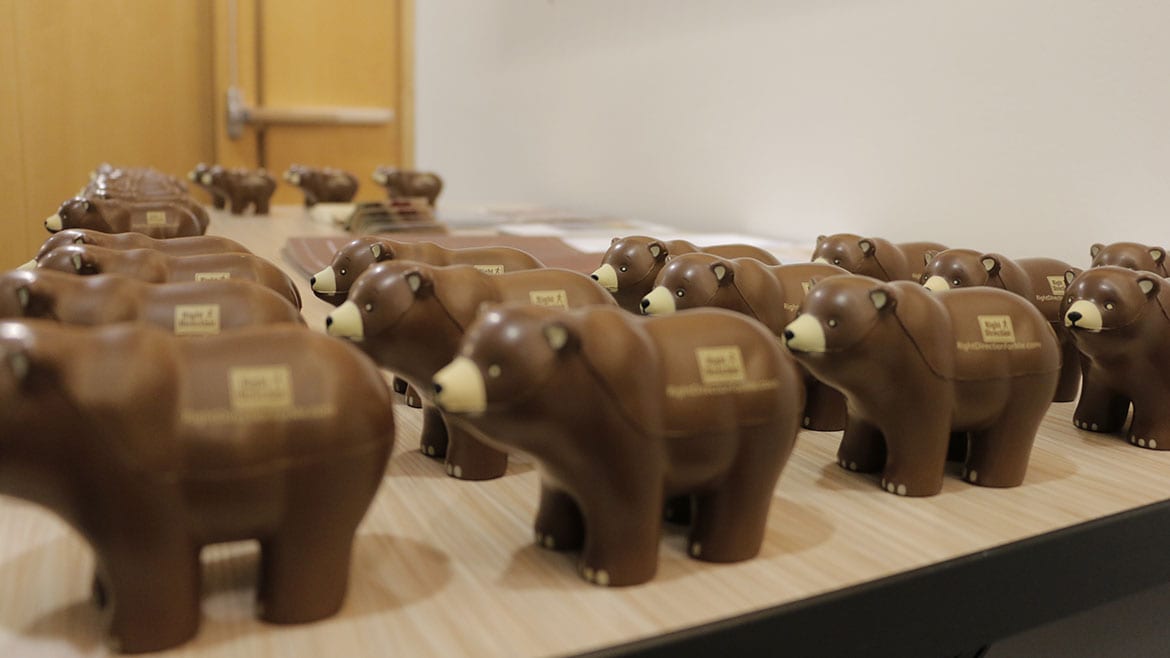 The creators of a national workplace mental health campaign use a bear to illustrate how "unbearable" mental health problems can be for employees. The campaign includes bear-shaped stress balls like the ones above, which were on a table during a presentation Friday at the Kauffman Foundation Conference Center in Kansas City. (Photo by Mike Sherry/The Hale Center for Journalism)
Share this story

Kansas City-area business leaders and health executives are kicking off an effort to make mental health a priority in the workplace.

On Friday, the Mid-America Coalition on Health Care (MACHC) introduced the Right Direction Initiative, a free, ready-to-use communication campaign for businesses that want to improve the mental health of their employees.

Speaking at the Kauffman Foundation Conference Center in Kansas City, the chief executive of MACHC said he had heard poor workplace mental health referred to as the phantom menace.

“You don’t always see it but it is there,” CEO Troy Ross said.

Nancy Spangler, a Leawood-based mental health consultant, laid out the business case for a workforce that is sound in mind as well as body.

Depression can drive up an individual’s medical care costs by 70 percent, she said. Spangler also said that research shows workers with depression miss an average of 4.8 workdays and suffer 11.5 days of reduced productivity per three-month period.

Marcas Miles, of the Employers Health Coalition, said short-term disability is another hidden area where mental health issues could affect a company’s finances.

The MACHC program, which was attended by area human resources professionals and other business executives, is the latest in a string of recent announcements focused on efforts to improve mental health among residents in the metropolitan area.

On Tuesday, Johnson County officials announced their participation in a national effort to reduce mental illness among jail inmates. And on Wednesday, mental health professionals from throughout the Kansas City region kicked off an initiative dubbed “It’s OK to Talk,” encouraging people to have open and robust conversations about mental health.

Spangler, who works with both MACHC and the Partnership for Workplace Mental Health, said the stigma associated with mental health issues has lessened.

But, she said, “It’s still a touchy subject.”

Spangler said getting buy-in from middle management is crucial to making mental health a priority, since there can be a disconnect between the commitment of senior executives and lower ranking managers consumed with other tasks.

The Right Direction materials attempt to make mental health a more approachable topic by using a bear in its materials – the idea being to help employees work through tough times that can sometimes be “unbearable.”

The campaign, Miles said, aims to create awareness about depression in the workplace, reduce the stigma of mental illness and encourage employees to take advantage of the resources at their disposal, including employee assistance programs (EAP) offered by some employers.

He said one key aim is to get employees who need help to take the first step toward getting that help. Miles said employers should let workers know what is available through their EAP.

“Employees don’t know about it,” he said. “They don’t know what it is, how to access it (or) what it can do for them. You are not putting it in front of them.”

They emphasized getting the word out about mental health services through multiple channels and coordinating and integrating the efforts across different departments.

Maggi Choplin, wellness and medical services manager for Hallmark, said it’s important to have different access points because one doesn’t know how an employee will end up getting help.

She cited the example of an employee who found out she had depression by accessing a screening tool through the company’s online health portal.

Another employee went through a mental health screening at a company health fair and told on-site therapists that he had sold his car and was planning to commit suicide that weekend.

Choplin went back and asked the man’s manager if he had noticed anything going on, since the employee appeared disheveled.

The manager said he had been aware of some issues and that the man’s co-workers had expressed concern.

But, Choplin said, the manager told her, “I didn’t feel like I should say anything to him because that was too personal.”