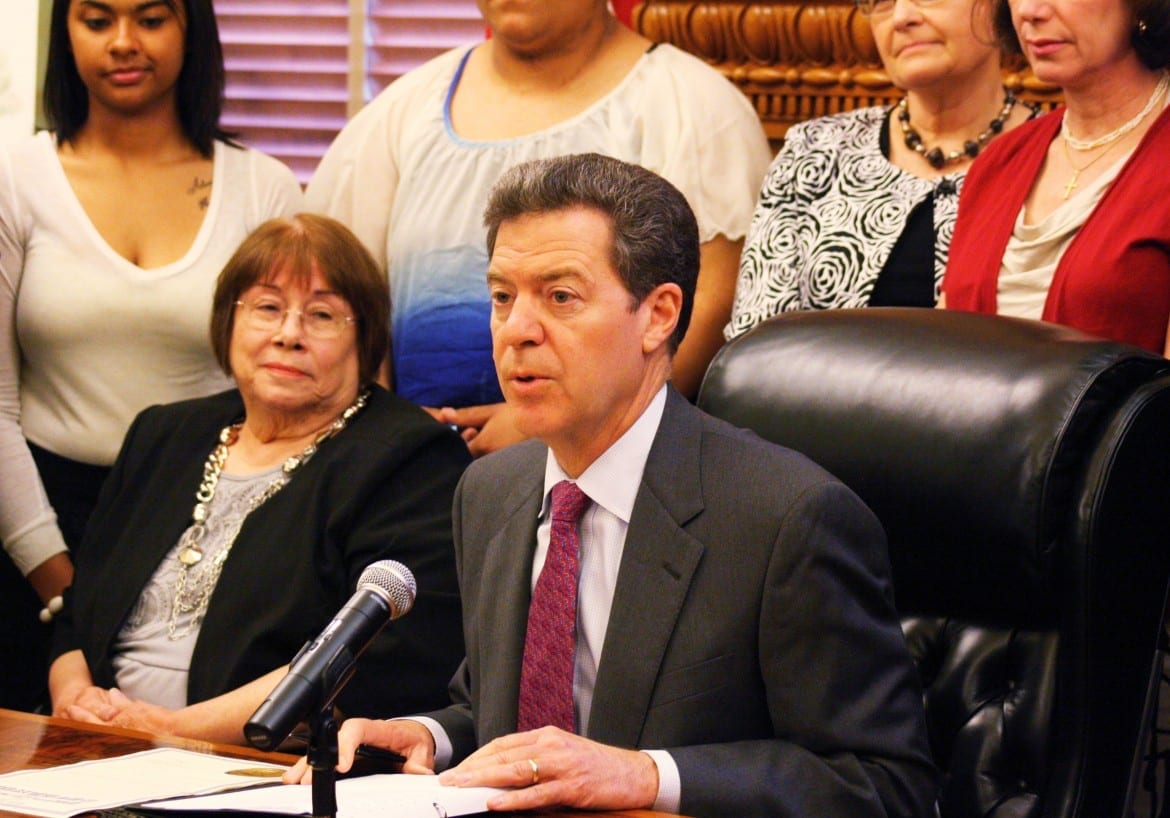 In this AP file photo, Phyllis Gilmore, secretary of the Kansas Department for Children and Family Services, listens to Gov. Sam Brownback make remarks about foster care services during a ceremony Monday, May 13, 2013, in Topeka, Kan. (Photo: AP/John Milburn)
Share this story

Less than three weeks after signing a bill that’s expected to drop 700 youngsters from the state’s Temporary Assistance for Needy Families program, Gov. Sam Brownback on Tuesday urged more Kansas families to open their homes to abused and neglected children.

“Being a foster parent is one of the most selfless things a person can do,” Brownback said in a prepared statement. “We have too many children coming from homes where their parents cannot or choose not to care for their sons and daughters. We are fortunate to have foster parents ready and willing to provide them a safe and loving home.”

In recent months, the number of children in the state’s foster care system has reached all-time highs.

Brownback was scheduled to address a Kansas Department for Children and Families-coordinated celebration of National Foster Care Month on Tuesday at the Statehouse but was unable to attend due to a scheduling conflict.

Included in Senate Substitute for House Bill 2258  was a provision that lowered low-income families’ lifetime eligibility for TANF from 48 months to 36 months, effective July 1.

DCF officials have said they expect to drop approximately 350 “cases” from the program’s rolls on July 1 because they have been on TANF for 36 to 47 months. These cases, according to DCF estimates, are likely to include 350 parents and 700 children.

After July, the department expects an additional 40 cases — 40 adults, 80 children — to reach the 36-month threshold each month. They, too, will be dropped from the rolls. It’s not yet known how many children in these families will end up in foster care.

“The people who are eligible for TANF are the poorest of the poor,” Howard said. “It’s already really difficult for these families to maintain any kind of housing. If they lose (TANF), there’s nowhere else for them to go; they have no one else to fall back on.

“At some point there’s going be a correlation between the level of poverty that these families are living in and the number of kids going into foster care,” he said. “I don’t know what it’ll be, but it’ll be there. I don’t see how it can’t be.”

Theresa Freed, a DCF spokesperson, disagreed. The TANF and foster care systems, she said, are independent of one another. TANF eligibility is tied to family income, while foster care relates to children living in unsafe environments.

“We don’t see that there’s a direct correlation,” she said.

Still, she said, DCF is “working on a communications plan” for alerting the state’s food pantries and homeless programs to the likelihood of more families turning to them for assistance.

The increased numbers of children in foster care, Freed said, appear to be driven by fewer children exiting the system rather than more children entering state custody.

“The removal rate has been steady,” she said. “It’s the discharges that aren’t increasing.”

Freed said the “most prevalent” reasons for children being removed from their homes are physical abuse and parental drug use.

“This is shaping up to be a nightmare for all the social service providers because this (new law) is going to put these families under so much stress — even more than they’re going through now,” said Wendy Flickenger, who runs Family Advisory Council, a Hutchinson-based program that counsels parents whose children are in foster care.

“Because the parents are going to have to do whatever they can to make money when they can’t afford child care, there’ll be more complaints about children being left unsupervised,” she said. “I don’t think there’s any doubt you’re going to see more kids in foster care.”

“I’m sure there are a lot of factors at play,” she said. “But the biggest concern is that the poverty level for these families is high, and they really don’t have access to the level of services they need because there just isn’t enough money in the system. And that’s unfortunate, because the state is not equipped to raise children.” 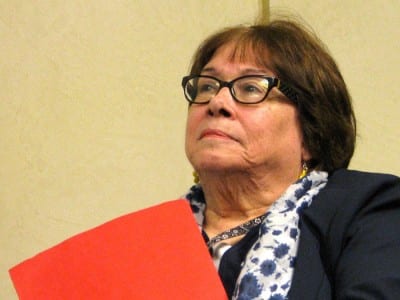 Brownback and DCF Secretary Phyllis Gilmore have characterized the reduction as proof that the administration’s efforts to strengthen families by helping parents find living-wage jobs and lessen their dependence on government-funded programs are working.

Freed said DCF is unable to track the numbers of children whose families once were on TANF and are now in foster care.

“Those are two different systems,” she said, “so we can’t compare them.”

In addition to Gilmore, those speaking at Tuesday’s ceremony were Gene and Joy Rothfuss, a foster parent couple who have care for approximately 60 children since 2011, and Jaime Schwandt, a former foster child from Kensington.

Schwandt, who’s now a captain in the U.S. Army Reserves, has written a book, “Succeeding as a Foster Child: A Roadmap to Overcoming Obstacles and Achieving Success.”

“Foster care saved my life, in little Kensington, Kansas,” he said. “I can’t thank all the people of that town enough. If it wasn’t for foster care, I wouldn’t be where I am today. Foster care in Kansas should be a model to the nation.”

Schwandt, his wife and infant daughter now live in Cheney.