Kansas Groups Gear Up For Yet Another Run At Medicaid Expansion 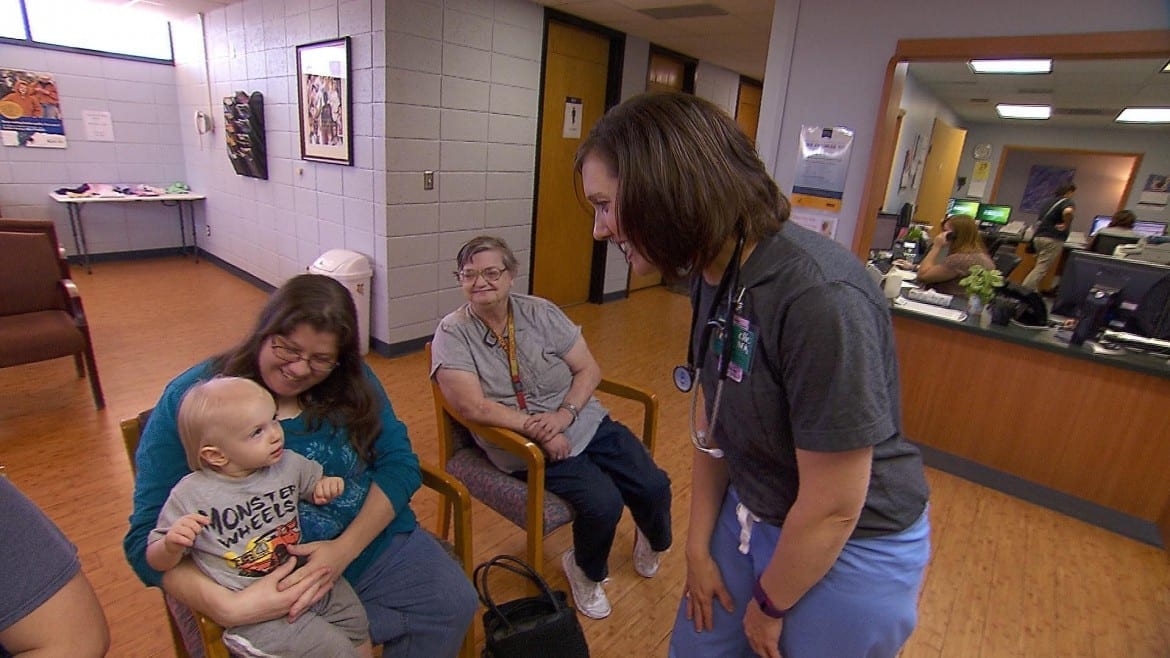 Dr. Julie Griffin greets patient Susan Walter and her family in the waiting room of the Community Health Center of Southeast Kansas in Coffeyville. Photo by Jim McLean at the Heartland Health Monitor.
Share this story

The Kansas Hospital Association and other groups urging Kansas lawmakers and Kansas Governor Sam Brownback to expand Medicaid coverage to more poor adults have little to show for their three years of lobbying on the issue.

So they’re spending the time between legislative sessions re-examining their strategy and gearing up for yet another push starting this fall. The result will likely be a new emphasis on connecting lawmakers to people in their districts struggling to get the care that they need. But the coalition will also continue to trumpet studies that show how expanding the Kansas Medicaid program – known as KanCare – could boost the state’s economy and stabilize struggling hospitals.

A recent study done by the State Health Reform Assistance Network, a partnership of the Robert Wood Johnson Foundation and Princeton University, found that expanding Medicaid has helped some states improve their budget situations.

The eight states in the study – Arkansas, Colorado, Kentucky, Michigan, New Mexico, Oregon, Washington and West Virginia – realized about $1.8 billion in combined savings and new revenue from expanded Medicaid eligibility. The money came mostly from the federal government picking up a larger share of the health care costs for those newly eligible for comprehensive Medicaid coverage, which created state budget savings on programs that serve the uninsured, pregnant women and people with physical disabilities or mental health needs.

The study’s authors concluded that in Arkansas and Kentucky, budget savings are expected to offset the states’ share of expansion costs through at least fiscal year 2021.

The nonpartisan Commonwealth Fund estimates that Kansas will lose out on nearly $1 billion federal dollars over the next seven years if it continues to reject expansion.

Kansas is one of 19 states that have rejected Medicaid expansion. The nonpartisan Commonwealth Fund estimates that if Kansas policymakers continue to say ‘no’ to expansion, it will cost the state nearly $1 billion additional federal funds over the next seven years.

There also is now concrete evidence that not having additional Medicaid dollars to offset cuts in other federal healthcare programs – primarily Medicare – is putting the squeeze on Kansas hospitals. That evidence is the closure of Mercy Hospital in the southeast Kansas community of Independence.

Last spring, David Steinman, the then CEO of Mercy, said expansion a make-or-break issue for the hospital.

“For hospitals like ours that are truly struggling, this could mean the difference between cash flowing and not,” Steinman said. “So, it is really significant for us.”

Just four months later, Mercy is shutting down most of its operations and transferring its emergency room and same-day surgery unit to a former competitor, Coffeyville Regional Medical Center.

Coffeyville’s board tentatively approved what is being called “an affiliation agreement” with Mercy late last week.

Mark Woodring, the CEO of CRMC, said what happened in Independence should serve as a warning to other Kansas communities and the legislators who represent them.

“I don’t think there is anybody that I’m aware of that wants to see a hospital close in their district,” Woodring said. “They don’t want to be viewed as the obstructionist that was the reason that 200, 300, 400 people now are looking for work. They don’t want to be the reason why local industry, and schools, and churches and community based organizations are saying ‘Where am I going to go for health care services?’”

Lawmakers also don’t want to be seen as insensitive to the needs of their constituents. So hardship stories of uninsured Kansans struggling with chronic and life-threatening illnesses will soon be a bigger part of the lobbying effort.

Monte Campbell has one of those stories.

Sitting in a Coffeyville clinic that provides basic health care for low-income people and those without insurance, Campbell’s hands shake uncontrollably. The Parkinson’s disease that causes the tremors also cost Monte him job at an oil refinery.

Campbell has applied for disability. But there is no telling if or when he will get it. So he waits, worries and feels ignored by the “politicians.”

“You know, I’ve paid taxes all my life and now I just feel like I’m thrown out to the curb,” Campbell said. “They (legislators) have got to quit thinking dollars and cents and start thinking human life. That’s the way I see it.”

Currently, non-disabled adults without children aren’t eligible for KanCare, no matter how poor they are. Expansion would make all Kansas adults with incomes up to 138 percent of poverty eligible. That’s up to $16,105 of annual income for an individual and $32,913 for a family of four.

The U.S. Census Bureau estimates that 324,000 Kansans age 19 to 64 have incomes that would qualify them for coverage under expansion. Of those, about 131,000 are uninsured.

Susan Walter, also from Coffeyville, is among the uninsured and has little hope of getting the heart transplant she needs.

Walter has suffered from congestive heart failure since a difficult pregnancy almost two years ago. But she can’t get an appointment with a heart surgeon until she has some kind of coverage – either Medicaid or private insurance.

“It’s stressful every day, not knowing if I’m going to have to leave my kids behind,” Walter said breaking into tears. “It’s just stressful.”

These stories and more like them are all too familiar to Julie Griffin, the young doctor who runs the Community Health Center of Southeast Kansas in Coffeyville.

Griffin agreed to practice in a medically underserved area in exchange for state help with her medical school tuition. But she said her strong Christian faith also led her to the clinic.

Griffin doesn’t have any harsh words for Republican Governor Sam Brownback and legislators opposed to expansion. She understands their concerns about higher costs and the state’s ability to care for the 90,000 to 150,000 people expected to enroll in KanCare if eligibility is expanded.

But she said the need is also real. And she believes Brownback might see the issue in a different light if he would come spend a day in her clinic and talk to people like Monte Campbell and Susan Walter.

“It’s a different environment,” Griffin said of the clinic. “I think when you have that conversation on a one-on-one level then the soundbites and the jargon and the ideology; that takes a backseat. And that’s what we need in Kansas right now.”

The state also needs a long-term fix for its budget problems. Deep income tax cuts enacted in 2012 at Brownback’s urging have caused a sharp drop in state revenue, forcing the governor and the conservative Republicans who control the legislature to raise taxes.

However, few believe the increases in sales and tobacco taxes passed at the end of the 2015 legislative session are a long-term fix to the state’s budget problems. As a consequence, legislators like Dan Hawkins, the Wichita Republican who chairs the House Health and Human Services Committee, are reluctant to consider and expansion of KanCare.

“We’re still in a fiscal nightmare here,” Hawkins said. “We’ve got to get out of this and adding that (Medicaid expansion) would just compound things even more.”