Checking Out: Some Say Hotels Aren’t the Key to Sheltering the Unhoused 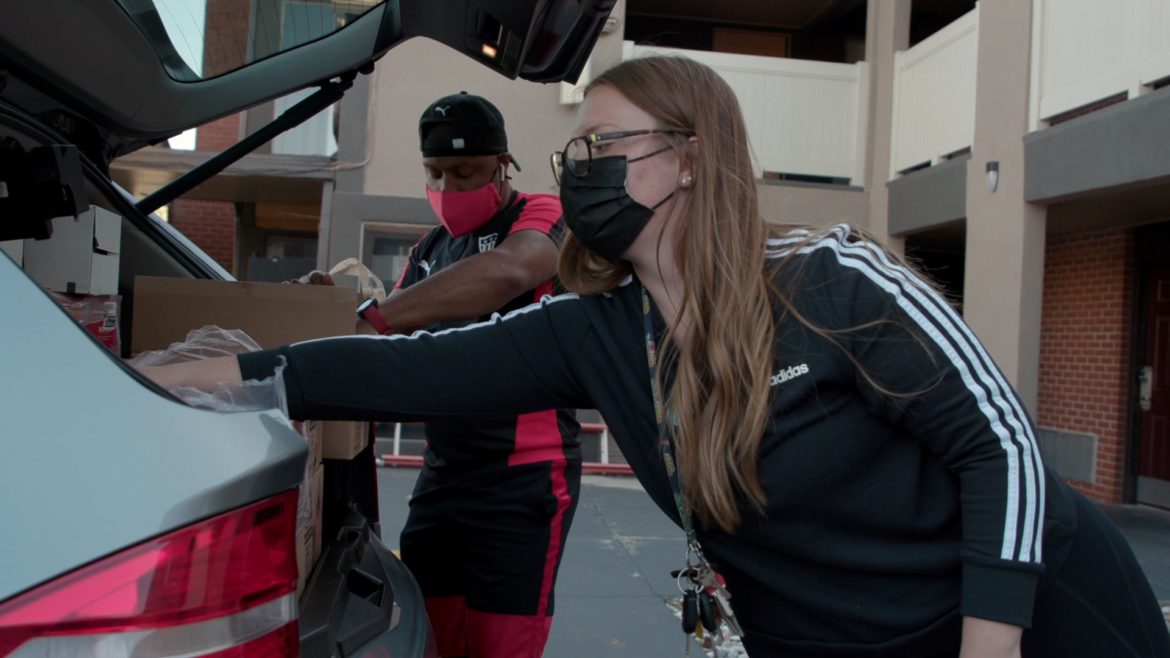 The sentiment has been shared repeatedly when it comes to sheltering the unhoused. Stop-gap measures haven’t been, aren’t and never will be enough.

Endless uncertainty for unhoused people whose lives, health, security and shelter have been in flux for years reached crisis proportions when COVID-19 hit the metro. This is, in part, why advocates, policymakers, unhoused leaders and shelter executives came to an agreement in mid-April to temporarily house folks in hotels and motels.

But the hotel program hasn’t proven to be a solution for everyone. Some say there’s a lack of humanity in these programs.

“We get taken care of better living on the streets than here (at hotels),” said Ashlea, a current hotel voucher participant who declined to share her last name for safety reasons.

Ashlea became unhoused about two years ago, before helping run Camp 6ixx in Westport for several months. Now she’s frustrated by unfulfilled promises of regular meals and access to other basic resources.

That’s where volunteers come in to patch up an already overwhelmed system.

“Two hotel managers gave out my cell phone number and I’ve gotten blown up with phone calls from people begging to get a hotel room,” said Janessa Reihle with KC Blanket Drive.

Volunteers like Reihle are doing what they can – such as giving folks meals and supplies like deodorant and other toiletries – but this raises yet another issue. These volunteers have yet to be compensated by the city of Kansas City, Missouri. Instead, Lotus Care House earlier this week picked up the tab to compensate volunteers who’ve been helping feed and buy supplies for people.

Kansas City City Manager Brian Platt said the city is working through administrative details at the moment to get contracts lined up and details ironed out.

One thing’s for certain, volunteers like Reihle said they will stand in when needed.

“These people are literally just like every other person,”  Reihle said. “They want to go to a Royals game in the summer. They want to spend time with their family. They want to listen to their favorite song on the radio and crank it up.”

A study issued earlier this year crystallized the growing issue of homelessness.

The Department of Housing and Urban Development analyzed point-in-time data from January 2020 and found there were 8,976 homeless people in Missouri and Kansas combined. Homelessness increased 5.6% in Missouri and 2.9% in Kansas between 2019 and 2020. Notably, homelessness in both states grew more rapidly than the 2.2% increase nationwide.

The pandemic darkened the outlook even more.

Alfredo Palacol, former director of case management at Hope Faith who now works at Lotus Care House, recently wrote in a blog for Health Forward Foundation that his team is “bracing for a wave of new people entering the homeless system.”

Among other things, the recent overflow of folks from neighboring cities and towns meant there were too many people to house, so some organizations have had to turn them away from congregate shelters. Others decided to put folks up in motel or hotel rooms.

Months after advocating for the hotel program, some people who helped organize the effort are raising flags about lack of safety.

Kuhl explained that during the winter, Lawrence offered a hotel providing shelter to people who had nowhere else to go. While it helped assistance workers know who needed what and when in one location, some dangers bubbled to the surface too.

“(The hotel program) attracted a lot of people … who were here on business. They were not here to shelter people,” she added. “That’s really, really dangerous.”

Housing advocates say some of these “bad actors” were predatory. Others were trying to find ways to survive to get basic necessities. And some turned to sex work.

Sources from inside the hotels said that because they weren’t provided food or a way to find it in an unfamiliar area of the city, people were forced to find ways to make money or find a service to exchange for a meal.

The complications that arise are mirrored in other cities, such as Chicago. Recent reports highlight the advantages and disadvantages of hotels as shelters.

Despite the challenges, advocates point out that there are more pros than cons to the hotel approach. They note, for example, that hotel occupancy rates declined to nearly 30% during the winter, according to a report by STR, so clean, warm rooms were available to fill.

The pandemic also pushed the community to find viable solutions because the unhoused were at risk of getting sick and unable to seek or afford medical attention. That nudged city leaders to look more urgently for options.

Kansas City Mayor Quinton Lucas has repeatedly listed “housing + affordability” as one of his main priorities. Lucas even started a homeless task force.

Marqueia Watson, a social worker with the Greater Kansas City Coalition to End Homelessness, is on that task force and has been working with unhoused people for years. Watson sees an opportunity to convert hotels into permanent housing.

Kuhl agreed. The idea is that the city would buy out hotels to create permanent single-room-occupancy shelters rather than house vulnerable people for a short amount of time, who at the end of their stay might end up back in encampments or unsheltered entirely.

The transition to making a hotel room into a permanent housing option is also quicker than building one from the ground up.

“And these folks don’t have the luxury of time,” Watson added. “It’s going to get cold again and we’re going to be right back in that cycle again so we’ve got to think swiftly.”

In early April, Platt was tasked with creating a plan with local hotels and motels, but he acknowledged that it is not a long-term solution. He pointed to tiny home shelters and rehabbing abandoned homes around the city, also known as a land bank program, as more permanent, safe and private options.

“We are trying very rapidly to find solutions,” Platt said. “There’s no clear path forward to solving this challenge and no one right solution to it.”

Platt, among others, points to the scarcity of homes and the need for more affordable options as long-term problems to address.

“The whole objective of all of this is not to permanently place people in hotels or the tiny homes, for example,” Platt said. “It is to bring people into a place where they can have a roof over their heads to be able to deal with the other issues and triage all of the other challenges that they’re facing and then find permanent, independent housing for all of those people.”

Local urban planning experts have long said it’s time for action, not more task forces, as Flatland reported in June 2019, which is part of the reason why Platt has been speaking with unhoused leaders.

There are upsides to the recent mobilization of groups who are joining to help unhoused people in Kansas City. One example is the Midwest Homeless Collective, which has made it easier to locate the people who need help the most. Another is the recent collaborative nature between city leaders and local charity organizations.

“It’s cool to see our city manager talking to the leader of the homeless union and having coffee with him … planning together,” Watson said. “It wasn’t that way before.”

That was clear during the Homeless Task Force meeting on May 11. Committee members brainstormed next steps while attempting to address visible cracks in the systems currently in place.

Marc Canovi, a crisis intervention training officer with the Kansas City Police Department, is also on the task force.

Canovi suggested adding a certified peer specialist, who’s “been there, lived it” and who understands firsthand what people want and need. Several of the committee members also raised concern over how to best reach folks in need, cognizant that steps like hotel programs are just the beginning.

The biggest challenge has been and continues to be coordinated planning, which has affected the rollout of care to give meals, secure mental health help and housing. Looking ahead, there’s some semblance of a silver lining.

“There’s something in the water,” said Watson, referring to the sense of urgency to help people who are unhoused. “The hotels and Bartle Hall have brought people together.”

Unhoused and Unheard: Temporary Fixes Fall Short of Demands for Unhoused Community The pandemic has exacerbated the homeless crisis in Kansas City, and advocates for the unhoused are pushing for more permanent solutions.

The KC Homeless Union met with Mayor Q for Four Days Straight. Here’s What They Agreed on. In Kansas City, unhoused people are temporarily moving into hotels. Will the city commit to longer-term solutions?

curiousKC | What Help Is There for Unhoused Pet Owners?

Room to Roam with No Money Down