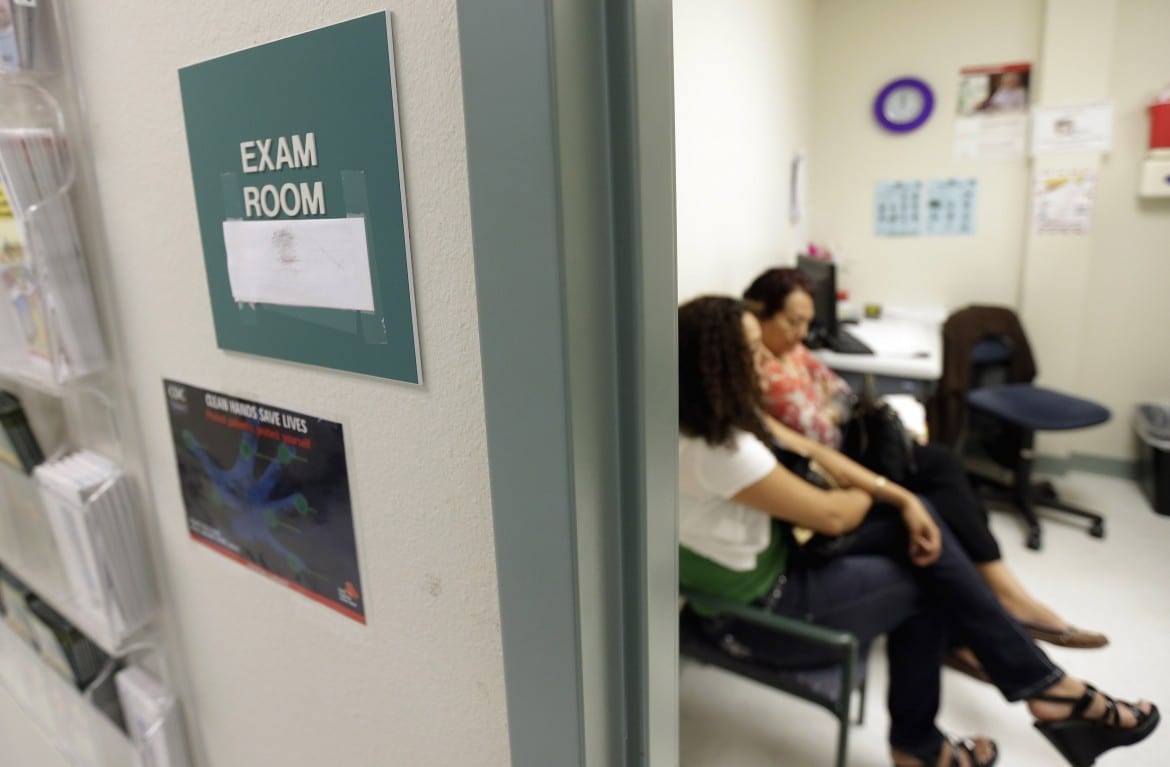 In this file photo, two women wait in an exam room. In Kansas, the debate surrounding Medicaid and federal funding continues with the president of the Kansas Hospital Association responding to the governor's recent comments on the issue with a public letter. (AP File Photo| Eric Gay)
Share this story

The head of the Kansas Hospital Association is taking issue with comments made by Gov. Sam Brownback at a recent news conference.

Asked about his continuing opposition to Medicaid expansion, Brownback downplayed the importance of the issue, telling reporters that innovation is more important to hospital finances than the billions of additional federal dollars that expansion would provide.

Tom Bell, the president and CEO of the hospital association, disagreed and told the governor so late last week in a strongly worded letter, which, among other things, said that expansion and innovation are complementary goals.

Tom Bell, president of the Kansas Hospital Association, has testified before state legislators on the benefits of Medicaid expansion. Bell challenged Kansas Gov. Sam Brownback on his comments regarding Medicaid in a recent letter.
(Photo: Dave Ranney | KHI News Service)

In a phone interview Wednesday, Bell says he had yet to receive a response to the letter, which outlined a list of partnerships and advisory groups formed in part by the hospital association to help with innovation.

Eileen Hawley, the governor’s spokeswoman, wrote in an emailed statement to the KHI News Service that the hospitals would be better off without the ACA.

“Most of the losses to hospitals cited by Mr. Bell are directly related to reductions in federal payments to hospitals due to Obamacare,” Hawley said. “The most obvious solution would be to repeal or at least reform the ACA (Affordable Care Act). We will continue working with KHA in finding a solution that truly benefits rural Kansans, while not relying on an unreliable and unsustainable funding stream from the federal government.”

Bell’s group has pushed for Medicaid expansion under the federal Affordable Care Act for years, arguing that it would provide compensation to facilities that are unable to recoup much of what it costs them to treat uninsured Kansans.

Expansion would provide health care coverage to as many as 150,000 Kansans — mostly adults — who do not qualify for Medicaid but make too little money to qualify for federal subsidies to buy private insurance.

Brownback and the Republican-controlled Legislature have resisted expansion, saying it would be costly and that they doubt the federal government will uphold its legal obligation to fund at least 90 percent of it.

Bell says the arguments against expansion keep shifting as advocates address them, but any suggestion that hospitals might not benefit financially is hard to swallow.

He says hospitals agreed to the ACA’s reductions in Medicare reimbursements in exchange for provisions that ensured more people would have private insurance and that many previously uninsured people would gain Medicaid coverage.

In his letter to Brownback, Bell wrote that even with the ACA’s reduction in Medicare payments based on things like readmissions, data from the Kansas Department of Health and Environment show that all but 15 of the state’s 143 hospitals would see a net gain in revenue if the state expanded Medicaid.

Bell says in meetings with the governor, Brownback has pointed to rural hospitals’ reliance on Medicare as evidence that the ACA is harming those facilities.

But Bell says the same data show that all but four of the state’s 97 hospitals classified as rural would also see a net financial gain if the state expanded Medicaid.

Bell says the billions of additional federal dollars that would flow to providers under expansion would be especially welcome at a time when hospitals are also dealing with reimbursement cuts from the federal sequester and the state’s switch to managed care Medicaid, or KanCare, which has caused payment delays and administrative hurdles.

Bell says the hospital association is working on a number of initiatives to better share information with other health care providers.

“I think our point is that expansion would actually help with that innovation,” Bell says, “because it would allow us to take our KanCare program, which really is based on some pretty innovative principles and make that apply to more folks.”