‘Healthy women, healthy babies’ are the goal for KC program 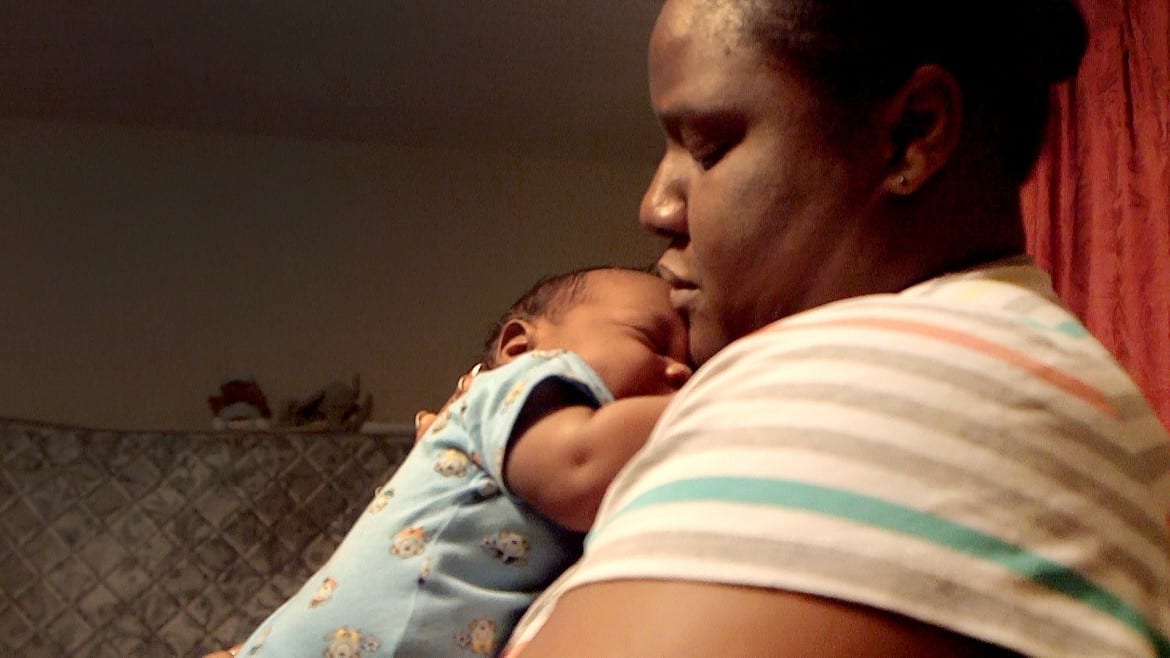 Erica Hardin held her 3-month-old son, Marcus, recently in her home. Hardin said she is grateful for a program of the Mother & Child Health Coalition, Kansas City Healthy Start, as they helped her with both of her pregnancies. (Photo: Todd Feeback/Flatland)
Share this story

Faced with a surprise pregnancy – and then feeling the pressure of transitioning from an independent woman to a new mom – Erica Hardin struggled mentally and financially after the birth of her daughter.

Much to her relief, Kansas City had a program aimed at reducing disparities in infant mortality and post-birth complications between minorities and the general population.

Known as Healthy Start, home visits through the program provided Hardin with everything from moral support to diapers and instructions on applying for food stamps.

In giving parenting tips, program staff impressed Hardin by including her boyfriend, the father of the little girl they named Markayla, who is now 7 years old.

“They made me feel like we are more so your friend than someone who is coming in to investigate your home and see if everything is up to standard, and then we are going to report you or something,” says Hardin, a south Kansas City resident.  “No, they showed you, ‘Well you can use this and this to help you and improve your situation.’ They were really good support.”

When Hardin and her boyfriend discovered early last year that they were going to be parents again, Hardin quickly reconnected with the Mother & Child Health Coalition, the Kansas City, Mo.-based nonprofit that has operated Healthy Start since 1997 with funds from the federal Health Resources and Services Administration (HRSA).

A dismayed Hardin learned, however, that the services might be unavailable because the coalition was in danger of losing its Healthy Start grant – funding that made up nearly 90 percent of the coalition’s $1.7 million annual budget.

That didn’t happen – HRSA renewed the coalition’s Healthy Start grant in November – but not before MCHC and its clients endured a year of uncertainty due to a “seriously flawed” application process, as members of the U.S. Senate termed it when they wrote to the HRSA administrator in September.

In the letter, Missouri Sens. Roy Blunt, a Republican, and Claire McCaskill, a Democrat, joined with colleagues from Wisconsin and Maryland in urging the agency to reconsider its determination that longtime grantees, including MCHC, had missed the cut for the new five-year funding round.

HRSA’s subsequent grant to MCHC delighted Susan McLoughlin, its executive director. “We were just relieved and excited to get moving,” she says.

The coalition, however, will have to do more with less this time around.

Data released in September by the National Center for Health Statistics, which examined figures from 2010, ranked the U.S. last among developed countries, with an infant mortality rate of 6.1 deaths per 1,000 live births.

Separate data from the U.S. Centers for Disease Control and Prevention showed that Missouri and Kansas had infant mortality rates above the national average in 2010, at 6.6 and 6.2 per 1,000 live births, respectively.

McLoughlin credits the FMIR program with identifying a significant infant mortality problem in the 64132 Zip Code of Jackson County, which prompted the coalition to add that area to its Healthy Start service area for this new grant period.

In this new cycle, the coalition expects to serve approximately 4,000 participants over five years with a grant of about $4.9 million – about a third less than the $7.4 million provided in the previous grant cycle.

Coalition officials are unsure what drove the decrease in the funding level for the grant.

Begun in 1991, Healthy Start is open to communities with rates of infant mortality at least 1½ times the national average.

In its September announcement, which did not include the Mother & Child Health Coaltion and other organizations added later, HRSA said it had awarded $65 million in grants to 87 organizations in 33 states.

The agency revamped the program to focus more on the overall health and wellness of women before, during and after pregnancy. It’s the “healthy women, healthy baby” concept, McLoughlin says.

Two of the key changes: a requirement to follow the family until the child reached 2 years of age and a de-emphasis on home visits in favor of connecting families with community health centers.

The latter meant switching from longtime community partners, including Children’s Mercy Hospitals and Clinics and Truman Medical Centers, to Samuel U. Rodgers Health Center and Swope Health Services. Truman and Children’s will stay involved in a different capacity.

“There are so many good aspects to the new Healthy Start that are in line with what Mother & Child Health Coalition promotes with healthy lifestyles, and health promotion and prevention, and access to care. It’s definitely a good initiative,” McLoughlin says.

As a federally qualified health center, which makes Samuel Rodgers eligible for benefits including enhanced Medicare and Medicaid payments, Zimmerschied says the health center must report performance data to HRSA.

Getting pregnant women in for care during their first trimester is one quality measure, which she says is a key to ensuring a healthy pregnancy and a healthy baby.

And as envisioned by the new Healthy Start program, Zimmerschied says the interaction with Samuel Rodgers establishes a medical home for the family and the infant.

“This just feeds right into our mission of providing quality health care for everyone,” she says.

Despite the decreased funding level, HRSA is expecting Kansas City Healthy Start to serve more than double the number of participants during the next five years compared with the previous five years.

Partnering with high-volume health centers like Samuel Rodgers is one way the coalition expects to serve more clients, McLoughlin says. She also says the program should be more efficient, since Healthy Start can take advantage of personnel such as nurses already on staff at the health centers.

Yet these partnerships almost didn’t happen because of the application snafu.

The difficulties with the new grant cycle began early on, in late 2013, McLoughlin says, when HRSA gave applicants only about a month to apply for the retooled program.

HRSA reopened the application process when the first round did not produce enough submissions, McLoughlin says. With more time, she says, coalition officials felt like they had nailed their application.

HRSA, however, stunned coalition officials by informing then in late August that MCHC had not made the cut.

MCHC suspected the agency had somehow overlooked its second application, and with the help of Sen. Blunt and Sen. McCaskill, it got HRSA to review the process and discover the error.

In the meantime, however, as the uncertainty stretched from spring into summer, the coalition was turning away potential participants and letting experienced staff pursue other work opportunities, according to McLoughlin.

Hardin, the south Kansas City mom, worried that women lacking transportation might find it difficult to participate in a Healthy Start program that revolves more around community health centers.

Yet, she is thankful the program is still around to help her with a son, Marcus, that she delivered in October. She is applying the lessons she learned with her daughter, and is eager to learn new skills as well.

And she has big dreams for her children.