From Maestros to Medicine: A ‘Healthy’ Dose of Computer Animation at UMKC 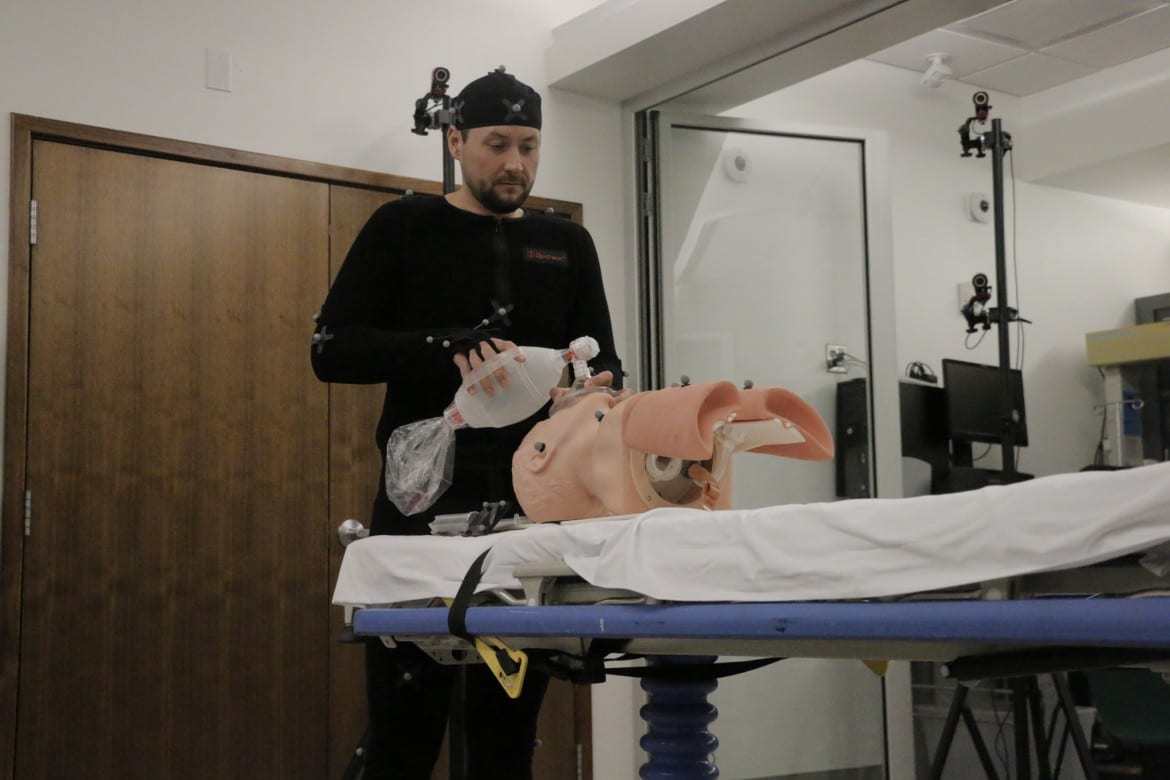 The University of Missouri-Kansas City is a diverse, urban institution with approximately 1,200 full- and part-time faculty dispersed across dozens of academic areas.

As multifaceted as it is, academicians from the disparate fields of fine arts and medicine have managed to find their way to Associate Professor Greg King in the School of Computing and Engineering, health and wellness being the common denominators.

The draw is King’s and his associates’ expertise in motion-capture technology, which they’ve used to capture the movements in three-dimensional space of everyone from aspiring conductors to physician trainees. One minute of data-capture generates a million data points.

King’s partners include Steven Davis and Sabrina Madison-Cannon from the Conservatory of Music and Dance and Mark Hoffman, director of the Center for Health Insights in the School of Medicine. Davis is director of conducting studies, and Madison-Cannon is an associate professor of dance with expertise in Pilates.

It all began about seven years ago, when Davis recruited Madison-Cannon to help correct the slouching he noticed among students at UMKC’s summer conducting symposium. Madison-Cannon was already working with King on a project with the dancers.

“Sabrina was actually the person that tied Dr. King into this process,” Davis said, “giving us, which I love, the quantifiable data to let us know whether or not we are really on the right track. And if we are not on the right track, then we need to be considering other ways to help the physical body move better.”

A well-trained conductor not only exudes confidence, Davis said, but is less prone to rotator cuff problems and other potentially career threatening injuries.

Meeting King shortly after coming to UMKC from the private sector in 2013, Hoffman wondered how the Human Motion Laboratory could help clinicians.

Hoffman found his inspiration in, of all places, the Department of Architectural Studies at the University of Missouri-Columbia, which was using a portable motion-capture system to evaluate how people navigate through retail spaces.

Partnering with a faculty member in Columbia, King and Hoffman got a grant to purchase a similar 18-camera system. Early results suggest the technology was useful in teaching intubation, the placement of a tube into the windpipe to facilitate breathing or for other purposes.

The system has also spurred interest at area hospitals, including movement disorder specialists at Children’s Mercy. At UMKC, Hoffman is also talking with ophthalmology and dentistry faculty to improve ergonomics in fields where practitioners spend a lot of time hunched over patients.

As word has spread about the motion-capture system, inquiries have come from far afield, even from people hoping to reduce sign language fatigue.

“When Dr. King and I began this project together, we sensed there was a new and unique and exciting opportunity,” Hoffman said, “but I think it is safe to say we have both been surprised at the number and intensity of interest in using this in so many ways, and it has been one of the most exciting things I have worked on.”