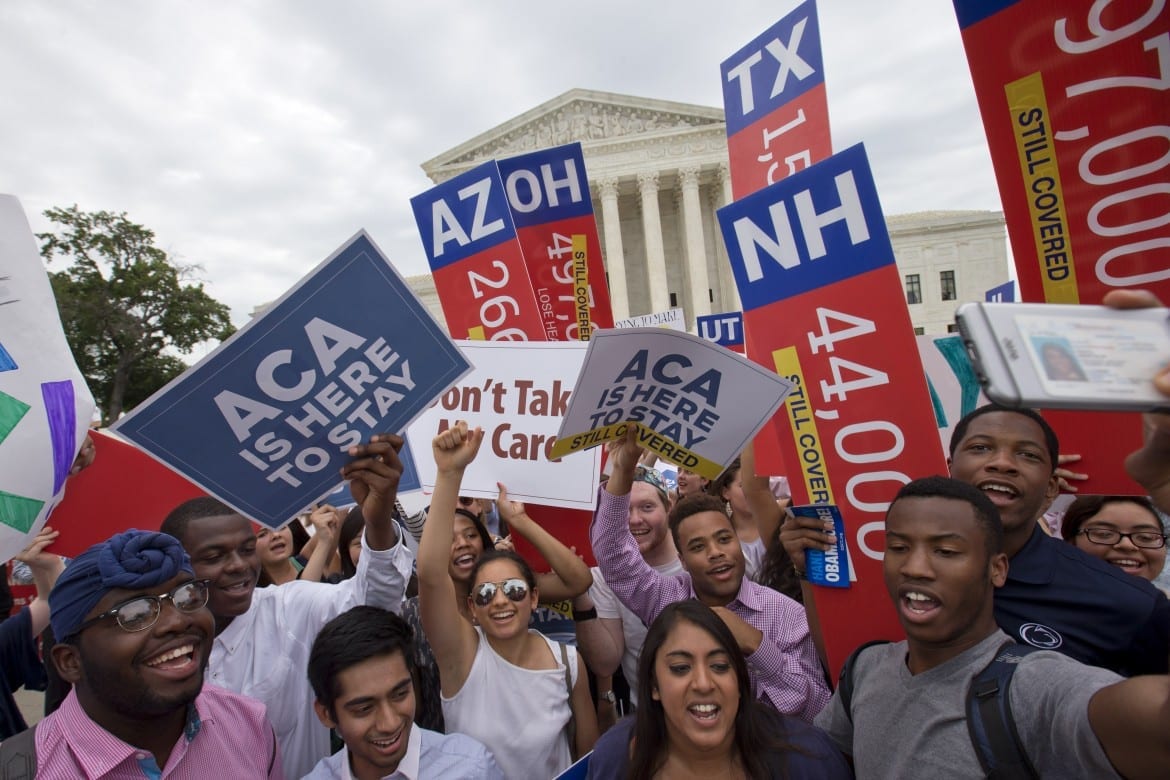 Students cheer as they hold up signs stating that numbers of people in different states who would lose healthcare coverage, with the words "lose healthcare" now over written with "still covered" stickers, after the Supreme Court decided that the Affordable Care Act may provide nationwide tax subsidies, Thursday June 25, 2015, outside of the Supreme Court in Washington. (AP Photo/Jacquelyn Martin)
Share this story

Reactions to today’s U.S. Supreme Court ruling upholding a key pillar of the Afforable Care Act – the subsidies made available through the federal insurance marketplace:

U.S. Rep. Emanuel Cleaver (D-Mo.): “The Supreme Court has said it again and again: The Affordable Care Act is the law of the land. Today’s decision saves lives. The ACA is helping millions of Americans focus on their families, jobs, and quality of life, instead of worrying about what will happen if they and their family members get hurt or sick. Now I am no lawyer—I am simply a United Methodist preacher. Even I can tell you, the text, structure, and history of the law have always been crystal clear on this: tax credits are available to all eligible Americans, regardless of whether they live in a State that chose to set up its own Exchange or, in a State, like Missouri, that chose to let the Federal government set one up for it. As the majority opinion states, ‘Congress passed the Affordable Care Act to improve health insurance markets, not to destroy them.’ Some political partisans have been trying to eke out a victory against President Obama and Congressional Democrats, at the expense of people’s health, well-being, and wallets. Today’s decision protects 6.4 million Americans across the country and 200,000 in Missouri from suffering. It is a victory for us all.”

U.S. Sen. Pat Roberts (R-Kan.): “The Supreme Court’s decision today does not take away from the fact the Obamacare is fundamentally broken and that the administration has recklessly implemented this law, damaging our health care system as a whole and jeopardizing Kansans’ health care. Every day Obamacare continues to hurt millions—just last week the administration released the proposed premium increases for 2016, rising to as high as 38 percent for some in Kansas. Doctors are becoming increasingly unavailable to their patients, and employers continue to cut jobs and hours. I will continue to fight for real reforms to our health care system that lower costs, lift the burden on our job creators, and restore the all-important relationship between a doctor and their patient. We don’t need to fix Obamacare, we need to fix health care.”

Brenda Sharpe, president and CEO of REACH Healthcare Foundation in Merriam, Kansas: “The United State Supreme Court’s ruling means that 70,000 residents in the Kansas City metropolitan area who qualified for tax credits to purchase health coverage will continue to receive that financial assistance, enabling them to maintain coverage for themselves and their families. These federal subsidies have helped thousands of Kansas and Missouri residents obtain health insurance — many for the first time. Having insurance opens the door to affordable, dependable health care, which benefits hardworking people and their families, and contributes to community health overall.”

Missouri Gov. Jay Nixon (D-Mo): “Today’s ruling is good news for hundreds of thousands of working Missourians who will continue to have access to affordable health coverage through the federal exchange. However, it is important to note that there are hundreds of thousands more Missourians who continue to be denied access to affordable health care due to the Missouri legislature’s inaction on Medicaid.”

Missouri Sen. Roy Blunt (R-Mo.): “This law has been one false promise after another. First, the president promised people if they liked their health care, they could keep it. He insisted that not having coverage would result in a penalty, not a tax, and he promised affordable health care to millions of Americans who now find they cannot afford it. While I’m disappointed that the Court didn’t ultimately accept what the law actually said, I’ll keep fighting to protect Missourians from the president’s flawed health care plan and replace it with a patient-centered system that lowers costs, increases choices, and provides greater access to quality care.”

Rep. Tim Huelskamp (R-Kan.): “Without the Supreme Court to bail out Congress, it is now time to act. For four years, we have waited, begged and pleaded for Republican leadership to allow us to debate and pass a patient-centered replacement. Now is the time to act – now is the time to keep our word to the American people. After 58 votes to repeal Obamacare in part or in whole, I call on our Republican leadership to use Reconciliation to put a full repeal of ObamaCare on the President’s desk.”

Rep. Lynn Jenkins (R-Kan.): “Today’s disappointing decision does not change the hardships that folks around Kansas and across the nation are facing as they continue to deal with the uncertainty and failed promises of the President’s broken healthcare law. While the healthcare delivery system had problems prior to the President’s healthcare law, under his fundamentally flawed law it is still not working and remains just as burdensome, confusing, and expensive as the day it came into existence. I remain committed to fixing this mess and implementing better healthcare solutions that lower costs and empower patients to choose the care that’s right for them.”

Steve Coen, president and CEO of the Kansas Health Foundation in Wichita: “The Kansas Health Foundation’s mission is to improve the health of Kansans, and we’re supportive of the United States Supreme Court ruling in King v. Burwell to continue federal subsidies for health insurance plans. With this ruling, nearly 70,000 Kansans who rely on tax subsidies to help pay for their health insurance will be able to keep their plans and not face losing coverage. Now is the time for our state legislature to move forward and expand Medicaid in Kansas so an additional 150,000 people can receive health care coverage.”

We know that people without health insurance tend to delay treatment or don’t get diagnosed with health problems until the condition is severe, which often requires more expensive interventions. Without this help the cost of insurance would become unaffordable and could result in many people dropping their coverage. We celebrate today’s decision and the reassurance that many hard working members of our community can now take the worry of health insurance off their plate.”

Kansas Gov. Sam Brownback (R-Kan.) via Topeka Capital-Journal’s Jonathan Shorman: “Today’s decision by the Supreme Court is very disappointing and blatantly ignores the language of the law. Kansans will continue to suffer higher health care costs, including insurance premium increases of more than 30 percent. We are hopeful that Congress and President Obama’s administration will provide states the needed flexibility in finding Kansas solutions to our health care challenges.”