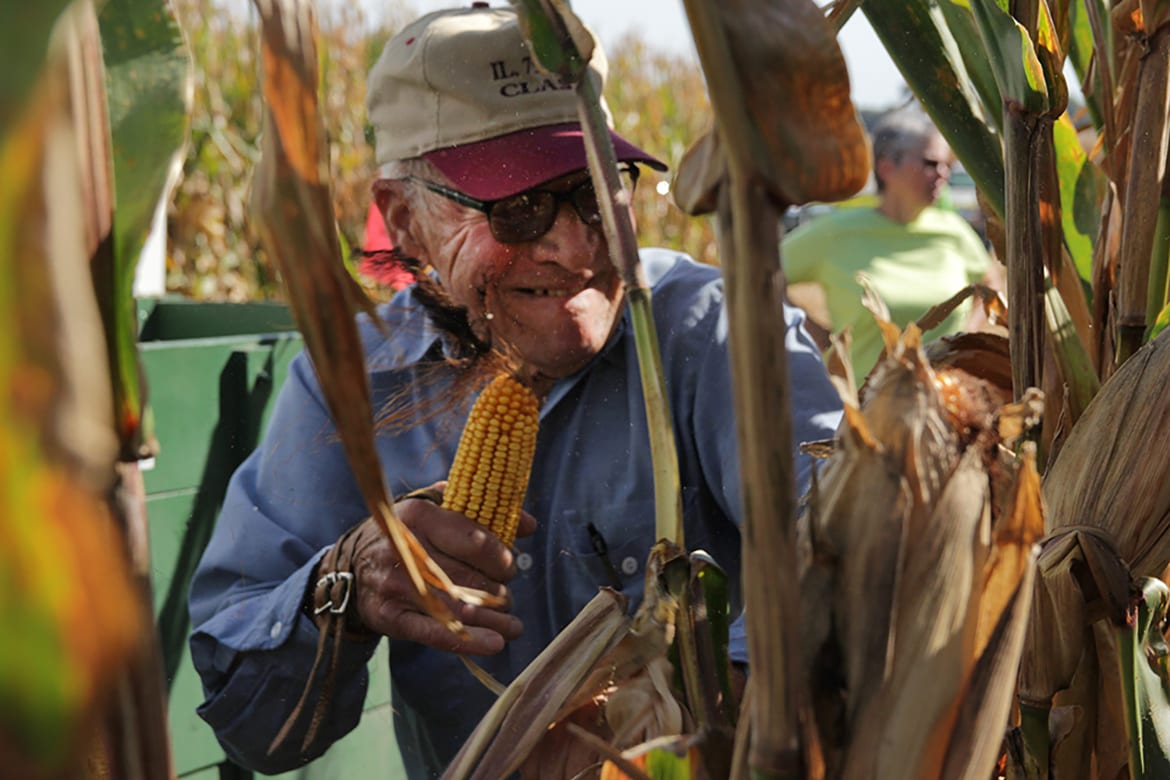 Dick Humes squinted and sweat as he moved down a row of corn. He sliced through the husk with a metal hook in his right hand, snapped the ear from its stalk with his left and threw it over his shoulder into a wagon rolling alongside him.

Every other second, the corn hit the floor of the wagon with a thud. Humes was setting a steady pace for the men’s 50-and-older division at the 34th annual Illinois State Corn Husking Competition.

While farmers across the Midwest harvest billions of bushels of corn using giant machines called combines, the competitors at this contest opted for a more primitive technology: their hands.

The contest, held in late September at a cornfield in the rural western Illinois town of Roseville, is a race against the clock. The goal is simple: Pick as much corn in 20 minutes as possible. The contestant with the wagonload of corn that weighs the most at the end of the allotted time, wins.

The races were divided into heats, like a swim meet. Men competed against men their age. Women against women. And there was a 2-minute- long pee-wee contest for the kids.

At the end of his heat, Humes hopped into the wagon with his pile of corn and rode around to the weigh station on the other side of the field.

In 20 minutes, he had picked 322 pounds of corn, putting him in first place. Humes will go on to compete against the winners of contests in nine other Midwestern states at the national corn husking competition held in Iowa in the middle of October.

But for Humes, picking corn by hand is about more than winning. It’s about a connection to the past and it’s how he remembers his dad.

In 1937, Humes’s father moved from Missouri to Illinois to work as a sharecropper. Like most farmers in those days, he picked corn by hand. In his first six days on the job, he picked 125 bushels of corn a day. At 70 pounds a bushel for corn still on the cob, Humes’s dad picked about 5,000 pounds in his first week.

When asked if he thought picking corn by hand was in his blood, Humes laughed and said, of course.

Frank Hennenfent, secretary of the Illinois Corn Husking club, which hosts the yearly contest, drives a 6-row combine this time of year but hopes the organization will help keep the art of husking by hand alive.

Hennenfent, a corn and soybean farmer from Warren County, Illinois, has been competing for years. But the original competitions began in 1924 and grew in popularity in the 1930s as farmers struggled through the Depression and the dry days of the Dust Bowl. Back then, state competitions routinely drew crowds in the thousands and in 1938, newspapers reported 125,000 spectators attended the national competition in Iowa. For context, Soldier Field, home of the NFL’s Chicago Bears, holds 61,500 fans.

Hennenfent said he grew up hearing stories about the big, national competitions.

One of his favorites was about Carl Seiler, a left-handed husker from Knox County, Illinois. In 1932, Seiler won the national competition and got his picture printed in the papers. Letters poured in from fans across the country, including several marriage proposals.

Don McKinley, a competitor at this year’s competition for the men’s 75-and-older division, was a kid back then. He said he remembered the big corn husking contests, but he also remembered what it was like to pick corn for a living.

McKinley grew up in southwestern Iowa on a farm with 100 acres of corn. During the harvest, he would drop out of school for two months to help his older brothers and dad. The five men picked from before sun up until after sundown.

“Now that I look back, Mom and Dad never had any worry about us kids running around at night. We were so damn tired you couldn’t,” he said, laughing, “we would just fall over into bed, collapse, get up the next morning and do it all over again.”

McKinley said that each of them brought in about 4,500 pounds of corn a day. That’s a lot of corn to pick by hand. But, McKinley has run the numbers, and they show that a man simply can’t compete with a machine.

In 1937, John Deere came out with a Number Ten Corn Picker that picked as much as four Don McKinlies. And today, a big combine like the one a typical Illinois farmer uses, brings in close to 200,000 pounds of corn an hour. You would need an army of over 2,000 men to keep up.

“That’s in my lifetime. In my lifetime!” McKinley said in amazement. “My dad would turn over in his grave if he knew there was a machine that could pick that much.”