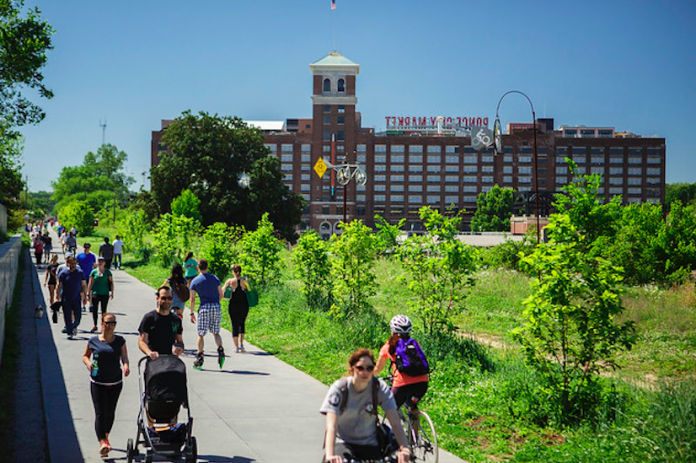 The proposed Greenline would be similar to the 22-mile BeltLine in Atlanta, a recreational loop along a former rail corridor that draws 2 million visitors a year. (Courtesy | BeltLine)
Share this story

An ambitious plan to create a 10-mile “Greenline” recreational loop around downtown similar to the popular BeltLine in Atlanta is being championed by developer Vince Bryant.

“It’s not a new idea,” Bryant told the Downtown Council board last week. “Most progressive cities have rails to trails projects.

“The goal is to have people come off streets and parking lots, and come on to paths that connect our green spaces.”

Vincent said the proposed south leg of the Greenline concept could be relatively inexpensive.

It calls for repurposing an underused access road that runs east and west along the north side of the Kansas City Terminal Railway. The busy rail corridor divides the Crossroads Arts District from Crown Center and Hospital Hill.

The access road runs about one mile and could become a recreational pathway connecting the new Crossroads Westside apartments at 601 Avenida Cesar E. Chavez on the west to the 18th & Vine Jazz District on the east.

Architect Steve McDowell of BNIM has been working with Bryant more than two years on the idea.

He said while the proposed south leg of the Greenline would parallel the railroad tracks, it would not replace or repurpose them.

“We’re working with the city to get right-of-way access,” he said.

Bryant already is familiar with what would be the south leg of Greenline loop through his development work. He is the owner of 3D Development.

He has a contract to purchase the Superior Moving & Storage buildings at 2020 Walnut St., which are close to the KC Terminal tracks. His tentative plan calls for renovating the historic buildings into office space.

He currently is pursuing a 250-unit apartment project called Tracks 215 on a parking lot bordering the south side of the KC Terminal tracks next to the Freight House building.

Bryant told the Downtown Council board he believes the next step in the revitalization of downtown is to make it a more livable community.

In addition to the access road, the broad outline of the Greenline loop would follow Martin Luther King (formerly The Paseo) Boulevard on the east, the existing Riverfront Heritage Trail on the north and through the West Bottoms along the Kansas River on the west.

“The idea is to take advantage of the park system we already have,” McDowell said.

The two Greenline advocates compared their idea to several other cities where rail corridors have been repurposed for recreational use: the High Line in New York, The Bentway in Toronto and the BeltLine in Atlanta.

The BeltLine in Atlanta is transforming 22 miles of former railroad corridor land into bike and walking trails, and ultimately a streetcar line. It attracts 2 million visitors annually and has spurred $4.1 billion in redevelopment along the route, according to its website.

The Greenline proponents have applied to the city Public Improvement Advisory Committee for funding for a feasibility study.

The advocates are looking at federal, state, local and philanthropic sources, along with potential tax-increment financing from adjoining development projects.

Following the presentation, the Downtown Council board approved its support for the concept. The Greenline proposal also has been endorsed by the Crossroads Community Association.