Doctors said Erika Wright would only live to the age of 10, because of her muscular dystrophy. She claimed that healthy eating allowed her to live to 45. (Photo: Ennis Walker, courtesy of NCR-SARE)
Share this story

Community gardens have been a source of food stability and financial savings for Americans since the 1800s. During the Great Depression, they provided food to the unemployed, and The Victory Garden campaign during WWII encouraged people to help a rationed economy by growing their own fruits and vegetables.

And although many of those national campaigns were abandoned after the war, America has seen a resurgence of community gardens since the 1970s.

One of the first Kansas City gardens to join that trend was The Troostwood Youth Garden at 52nd and Paseo, started by Erika Wright. 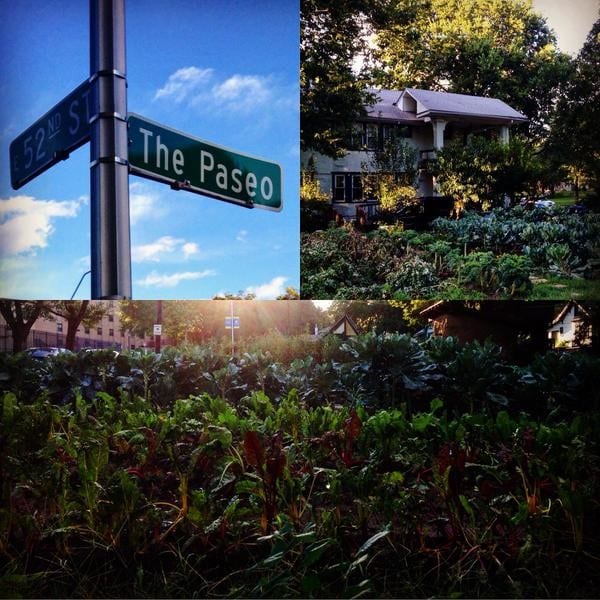 Wright conceived the idea to create a community garden focused on educating youth when she was working at her mother’s daycare center.

With the help of a land-grant from Rockhurst University, Wright grew what was an empty plot of land on a street corner into a thriving garden.It’s an accomplishment all the more impressive because she had muscular dystrophy and had been wheelchair bound since birth. The disease eventually took her life in 2011. She was 45 years old.

Since then, Mary L. Wright, Erika’s mother, and Jill Anne Johnson, Erika’s godmother, have continued Erika’s legacy by tending to the garden.

“We really kind of bombed out the first year, and then we said, ‘No. She worked so hard to get it going get it started and all that that the least we can do is it get on out there and get with it,’” says Mary Wright.

“You have to put one foot in front of the other and not let no man or no woman keep you bound.”

Erika Wright called her garden an “outdoor classroom,” where young people could learn about sustainable agriculture and eating a healthy diet.

And Wright and Johnson say that Erika never used her disease as an excuse not to accomplish her goals.

“Erika always felt like it was in her hips and not in her head,” says Wright. “She would get on her scooter and go. She was well-known in the community.”

In 2009, two years before Erika Wright’s death, KCUR 89.3, Kansas City’s NPR membership station, interviewed her. During that recording, she said she wanted to teach kids that it’s possible to change your life.

“You have to put one foot in front of the other and not let no man or no woman keep you bound,” she said.

At today’s garden, Mary Wright and Johnson say that patrons appreciate having access to a place in their community where they can get homemade produce at a reasonable price.

“Erika always wanted her price below the store,” says Mary Wright, “you don’t want it so high they can’t get it.”

“Any senior citizen that lives in this community, you’re allowed to come here and just get whatever there is,” says Mary Wright. “They say it just brings them back. They say the food tastes good, it reminds them of when they were kids.”

Fountain City Frequency |Getting Real About A Complex Diagnosis

Filmmaker Kevin Bryce set out to explore bipolar disorder. Then things got personal.

What you learn when you walk — really walk — around Kansas City