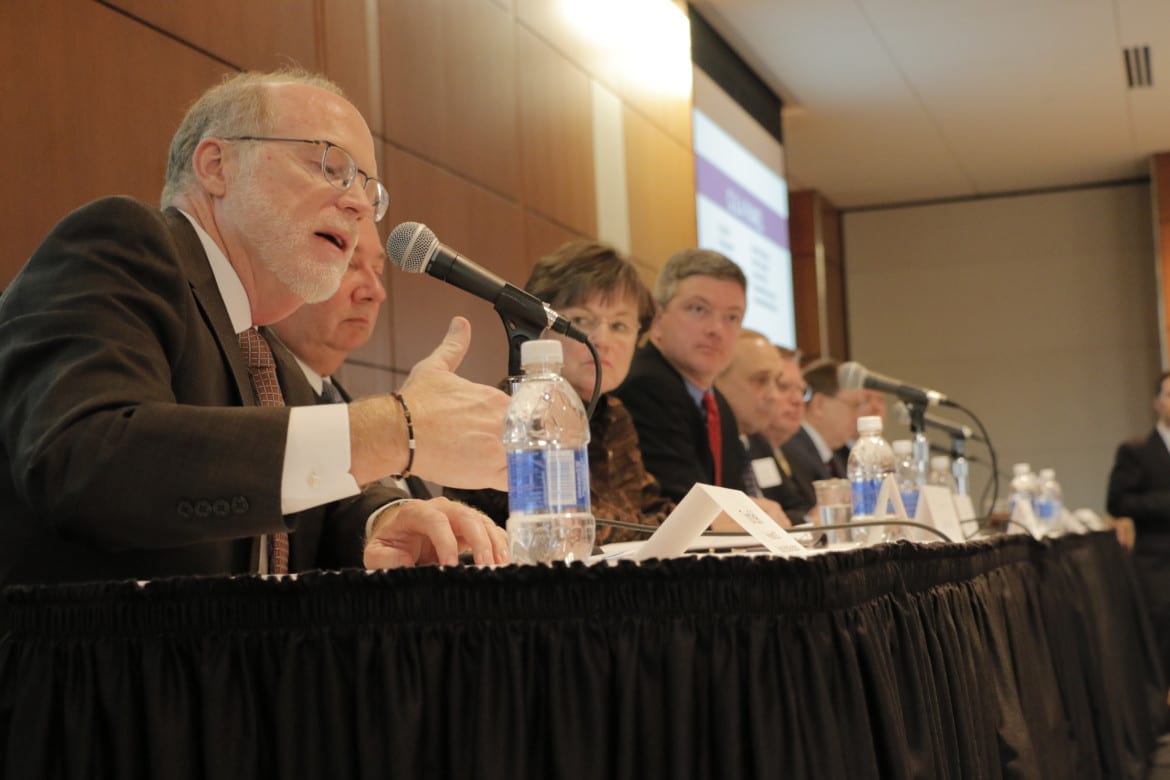 As Kansas lawmakers looked on, Tom Bell of the Kansas Hospital Association made a point at a forum on Medicaid expansion held Tuesday at Johnson County Community College in Overland Park. (Photo: Mike Sherry | Flatland)
Share this story

If policy makers in deep-red Indiana can do it, so can their equally conservative counterparts in Kansas.

That was the dominant – though not unanimously held – message at a Medicaid forum Tuesday at Johnson County Community College, where the topic was expanding the Kansas Medicaid program to cover as many as 150,000 additional Kansans.

Doug Leonard, president of the Indiana Hospital Association, told an audience of more than 300 people at the forum that Indiana Gov. Mike Pence, who is every bit as conservative as Kansas Gov. Sam Brownback, was satisfied that Medicaid expansion in Indiana was fiscally sound in the short- and long-term.

“He was not going to throw the state under the bus,” Leonard said.

The expanded Indiana program, which took effect nearly a year ago, has added more than 220,000 residents to the Medicaid rolls. Nearly 1,000 new health care providers have joined the program.

Kansas, by contrast, is one of 20 states that has refused to expand Medicaid, which in Kansas goes by the name KanCare.

A February analysis by the Henry J. Kaiser Family Foundation called the Indiana plan the most complex waiver of the four the federal government had approved up until that time. The analysis cited the state’s four different Medicaid packages and varied treatment of beneficiaries based on variables such as income, medical frailty, and maintenance of premium payments.

The government has allowed states to experiment with new approaches to Medicaid through expansion. One general idea in these “waivers” is to have recipients pay premiums and co-pays.

“Saying no to everything is not the answer.” — Kansas state Sen. Jeff King

That’s the case in Indiana. Leonard said that Medicaid beneficiaries in Indiana are required to have some “skin in the game” and must make modest contributions of their own to health savings accounts to qualify for enhanced benefits. Enrollees who fail to pay their share of monthly premiums face added co-pays and other fees.

Another key component of the Indiana plan, Leonard said, is that it pays health care providers at Medicare rates, which are higher than Medicaid reimbursement rates.

Under the Affordable Care Act, the federal government pays 100 percent of the costs of Medicaid expansion through 2016 in states that raise eligibility to 138 percent of the federal poverty level, or $16,242 annually for an individual.

The federal share gradually phases down to 90 percent in 2020 and remains at that level afterward.

It was unclear after the three-hour-long session if the Kansas Legislature will even hold committee hearings on Medicaid expansion in the session that begins next week – let alone find enough common ground to pass a measure this year.

Denning, for one, expressed serious misgivings about expanding KanCare, insisting Indiana would be unable to control the costs of its expanded program, especially given the higher reimbursements it’s paying to providers.

“They have no idea what is fixing to happen to them,” he said.

He cited a recent analysis of the Indiana plan posted on the website of Forbes magazine. Leonard, however, derided the analysis, saying it consisted of “wild claims” posted on a blog that had been thoroughly debunked by Indiana state officials.

“Sen. Denning must have access to some books in Indiana that we don’t have access to,” he said. “The governor’s office, the Senate and the House all looked at this, and it’s the state that came to us with the idea of the plan and the funding mechanism, so they have a lot more confidence in it than Sen. Denning has.”

Funding for Indiana’s expanded program comes from the state cigarette tax and an assessment on providers.

Dave Kerr, a former Republican state senator from Hutchinson who served as president of the Kansas Senate, told the forum audience that Kansas needed “to get serious and design a plan for Kansas with Kansas principles.”

He said that any Kansas solution should require beneficiaries to pay something for their care and contain an employment component.

King, whose hometown hospital, Mercy Hospital, closed last year, said the closure might have happened even if KanCare had been expanded and provided it with additional Medicaid reimbursements. But expansion, he said, might have offered other options.

“Saying no to everything is not the answer,” King said.

Even if expansion does come up for debate, King said he doesn’t expect it to pass this session. He predicted it could take as long as two years for that to happen.

Issue Set for Vote on Tuesday