William Ford Jr. Comes to KC For Insights Into the Future of Transportation 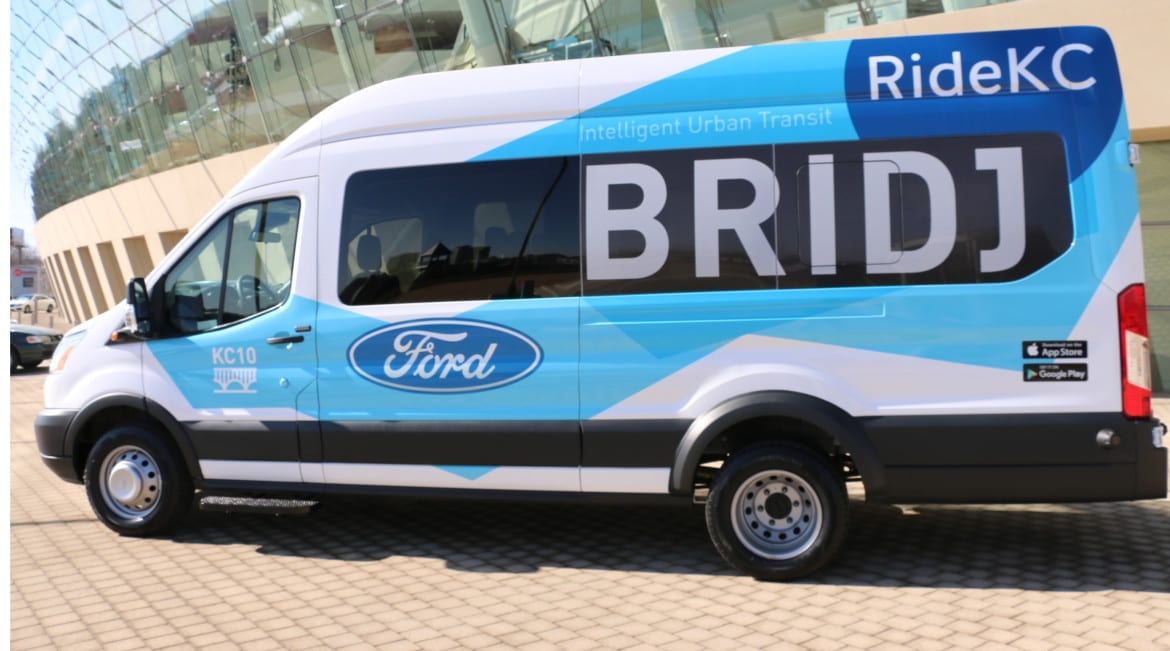 During "Focusing on the Future of Transportation" at Kauffman Center, innovations such as RideKC: Bridj, which allows commuters to order a shuttle from their smart phones or tablets, were part of the discussion. (Photo: Daniel Boothe | Flatland)
Share this story

Bad news, “Back to the Future” fans. Cars of the 21st century will probably not be able to fly.

But the vehicles will drive themselves. They will find their own parking. They will let you relax and stream multimedia on your way to and from your destination. And they just might make you money as a self-driving taxi when you’re not using it.

At least, that is what Executive Chairman of Ford Motor Company William Clay Ford Jr. believes will happen in less than a decade.

At KINETIC’s “Focusing on the Future of Transportation” conference Wednesday at the Kauffman Center for the Performing Arts, Ford Jr. gave the keynote speech before a panelist of automotive industry insiders, touching on everything from autonomous cars (cars that drive themselves), public transit, and the role Kansas City may play in shaping the nation’s transition to smart commuting.

“The mobility revolution is here,” Ford Jr. said from the stage in Helzberg Hall. “The automotive industry will see more degrees of change in the next 10 years than the previous 100. Not in the distant city, not in a far away future. But right here, right now in Kansas City,” he said.

Based in Detroit, Michigan, the Ford Motor Company has a long relationship with Kansas City. Having established the company’s first sales office in Kansas City in 1906, the FMC built its first assembly line outside of Michigan here in 1912. Today, Kansas City is home to the FMC’s largest manufacturing facility in the world, and one of the most technologically advanced. In 2015, they tripled their research efforts into smart transportation technology.

Ford said that this puts “Kansas City in perfect position to be a pioneering city of the mobility revolution,” Ford Jr. said.

In addition to self-driving vehicles, much of the Ford Jr’s speech highlighted the future of public transit, and how alternative methods of commuting are beginning to emerge. According to Ford Jr., Kansas City may also be on the forefront of those efforts as well.

Last thursday, the FMC announced its transit vans would be the exclusive vehicle behind pilot program “Ride KC: Bridj.” Teaming up with the Kansas City Area Transportation Authority, Bridj, a Boston based urban technology company that Ford Jr. dubbed  “the Uber of Public Transit,” Ride KC: Bridj will allow passengers using smartphones and mobile devices to order a shuttle that will pick them up and transport them to areas of the city that public transportation does not easily access. Kansas City commuters will be the first city in the nation to try it out in the next few weeks as the program rolls out.

Immediately following Ford’s speech the panel held a roundtable discussion that mostly focused on developing the infrastructure Kansas City would need to stay ahead of the curve of transportation innovation. Steve Miller, the Missouri Highways and Transportation Commission Chair, emphasized the importance of Kansas City thinking long term through an analogy.

“Let’s say you go out to the ocean and you see a wave on the horizon. You can see it coming, but you don’t know how big it is, and you don’t know when it is going to break. You have a decision to make.” Miller said. “You can either stand where you are and get smashed by the wave, or you can make the decision to start swimming as fast as you can towards it so you can ride it in.”

“We face that decision today in Kansas City with the future of transportation.”

— Daniel Boothe is a reporter for Kansas City Public Television’s Hale Center for Journalism. Email him at dboothe@kcpt.org.