You Asked About Light Pollution and We Looked to the Stars

As it happens, the stars have aligned between curiousKC and the historic astronomical event coming Aug. 21.

Just as our region was preparing for the full lunar eclipse, Kansas Citian Clark Johnson wondered if there is any local regulation of light pollution. Johnson asked curiousKC: “Is there an ordinance for reducing light pollution?”

While light pollution can come from many sources, some natural, most are human-made. Kansas City, like most built-up cities, has a “sky glow,” city light reflected in the night sky. The glow from our artificial light blocks from view around 46 billion light years — or the approximate size of the universe.

Use the slider above to compare the night sky visibility between downtown Kansas City and Brookfield, Missouri, about 120 miles northeast. (Photos: Ryan Hennessy | Flatland)

What we found is that Kansas City does regulate outdoor lighting that can bother neighbors. Or, as the city code puts it, the intent is to “protect the public health and general welfare by controlling the adverse impacts of glare and light trespass associated with poorly shielded or inappropriately directed lighting fixtures.”

The code calls for partial shielding of light in some cases, and states unequivocally that glare must be avoided by reflecting outdoor lighting away from residences and streets.

The strongest wording from Kansas City’s zoning and development codes on outdoor lighting says, “All outdoor light sources that produce more than 4,050 lumens must be at least partially shielded.”

However, that amount of lumens isn’t much of a restriction. The average halogen car headlights are around 800 lumens at low beam and around 1300 lumens at high beam. 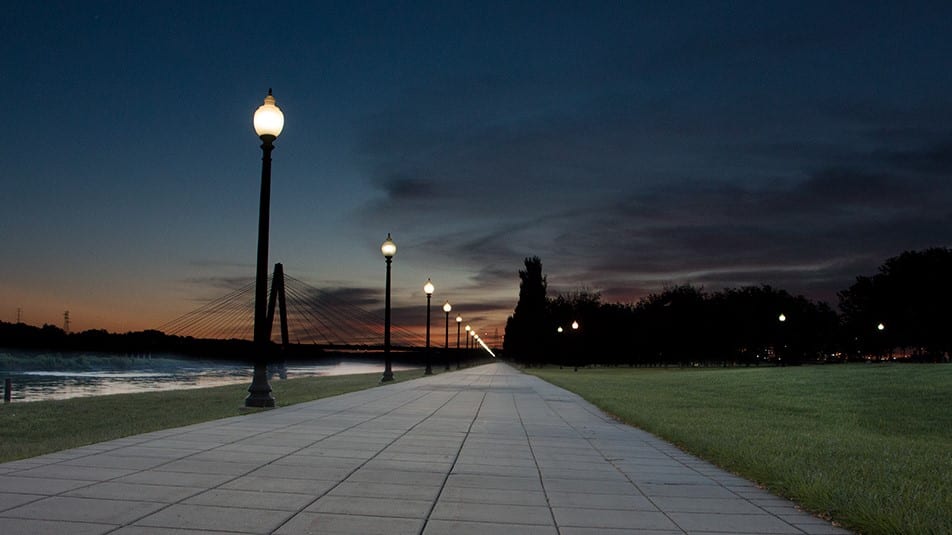 Most unshielded lights waste energy and contribute to light pollution. Dark-sky advocates, those who work to reduce light pollution, would argue an example of unnecessary light escaping upward can be found in the Riverfront Heritage Trail in Berkley Park near the River Market. The trail stretches 15 miles long, and is lit by old fashioned-styled lamps that have no top shield.

Seeing stars that aren’t dimmed by downtown’s lights doesn’t happen until you are more than 30 miles from the city center, and even then, you haven’t gone far enough to see them all. It takes double that distance to reach an area considered a dark night sky. We used this map to find a close “dark spot” to Kansas City.

As for the eclipse, Carolyn Adkins, City Streetlight Maintenance Supervisor, said Kansas City’s automatic lights are on photosensors, much like automatic headlights on a car, and would most likely be activated during the dark parts of the celestial event. She noted this would keep the streets safe for pedestrians and drivers.

Thanks, Clark Johnson, for your bright question. Got a question about Kansas City, the region or the people who live here? Anything you’ve always wondered about, found peculiar or downright confusing? Share your questions with KCPT’s curiousKC