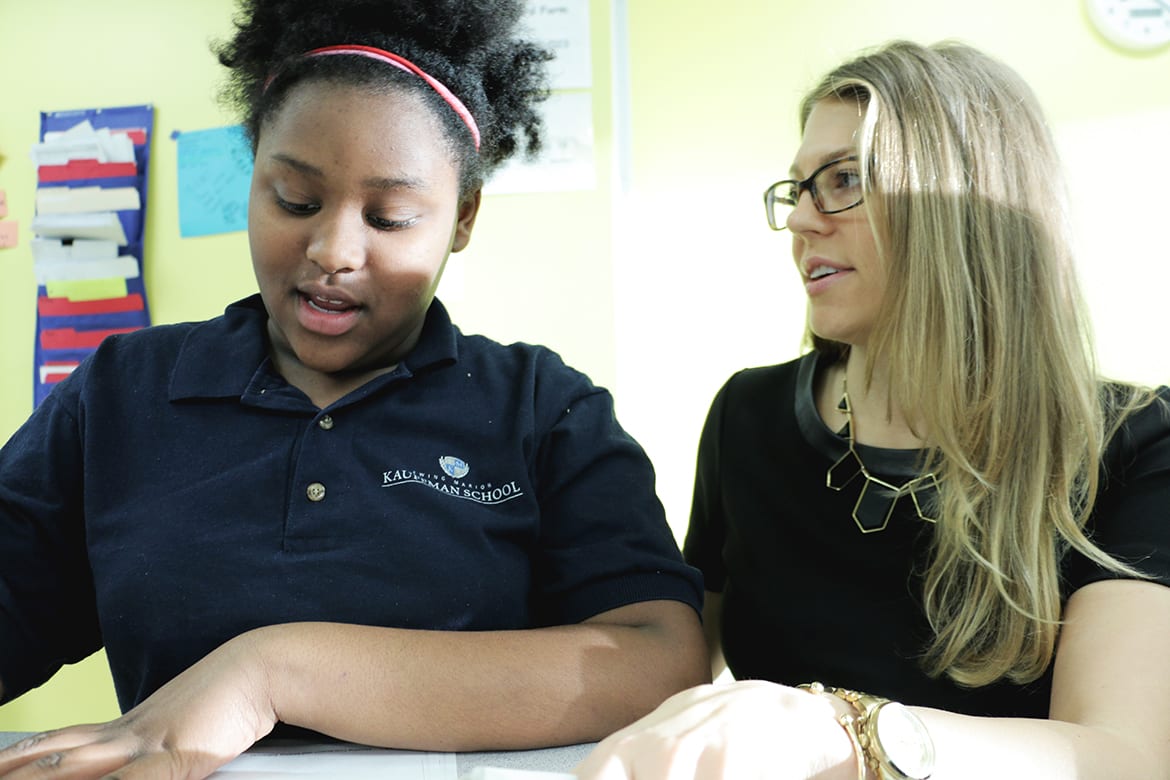 Growing up, Hannah Lofthus changed schools every year depending on if she was living with her mother or father, who both are educators.

“I’ve went everywhere from the city district school to suburban schools to rural schools,” said Lofthus, who, for the past three years, has served as the principal at the Ewing Marion Kauffman School and was named CEO of the school this month. “That has really helped shape for me that it’s not one school. Different schools have great components, and that’s why it was so great to build our own.”

The Kauffman charter school began in 2011 with 100 fifth-grade students and has added a new fifth grade class each year since.

“The mission of the school and the foundation is to bring a school that’s able to take low-income and minority students and get the same results as their affluent peers across the city,” Lofthus said. “In a lot of places across the country — in New York, in Boston, Chicago, New Orleans — that’s happening. They have schools that are taking those students and are achieving really strong outcomes, but in Kansas City I don’t think we’ve figured that out yet.”

Although Lofthus is deeply embedded in the education reform movement in Kansas City, working in schools was not always part of her plan.

“I was a double major in philosophy and political science (at UMKC), but really had no intention of going into education,” Lofthus said.

But all the time spent after school with her parents had certainly rubbed off and, while at UMKC, Lofthus founded a mentorship program to get fellow college students volunteering in urban schools.

“That program that we started is still going on at UMKC through the honors program,” Lofthus said. “And now those volunteers actually come to our school … and that’s who runs our after school clubs.”

Coordinating the program lead Lofthus to working in classrooms at the University Academy charter school and, from there, moving to New York City to join Teach for America.

“I joined Teach For America and had an opportunity in New York City to help found a really high-performing charter school similar to this one through a network of schools in New York City called Uncommon Schools,” Lofthus said. “Working in that school and helping to found different grade levels was really eye-opening in contrast to the other schools I’d experienced, and that’s, I think, a big reason why our school is here today.”

In 2009, the Ewing Marion Kauffman Foundation reached out to Lofthus, who had interned at the Foundation while at UMKC, to see how her experience with Uncommon Schools might inform their approach to starting a charter school.

Lofthus said that she began helping the Foundation form a plan for the new school, which lead to a job offer to move back to Kansas City and help run the school.

“I wasn’t sure if there was an appetite for change in the city, and I really loved the ed-reform climate in New York City and what we were able to accomplish collectively,” Lofthus said. “But knowing that that could be possible in my hometown and coming back to do that was a huge pull for me.”

The Ewing Marion Kauffman Foundation officially hired Lofthus in March of 2010, and she spent the next year visiting public and private schools across the country to develop a set of best practices.

What Lofthus learned has resulted in a longer school year with longer school days devoted primarily to math and English Language Arts and a huge emphasis on teacher training and professional development.

So far, the Kauffman School has had success in getting students, about half of which enter the school at a first- or second-grade reading level, reading on grade level in a few years.

“I know one student in particular, she came in as a pre-reader. She was literally still learning letter sounds, and the other day I was checking in with her in her seventh grade classroom and reading a book with her,” Lofthus said. “She was talking to me about how the author in the book that they were reading was using an omniscient narrator … Seeing a student that came in at a pre-reading level have a chapter book in her hands … and actually have a discussion about the author’s craft and text complexity to me was phenomenal.”

Lofthus said that sustaining the successes they’ve had while the school continues to grow each year will only be possible with great teachers.

“The biggest challenge that we face I think is human capital,” Lofthus said. “To build great schools — whether those are district, charter or private — the number one thing you need is great people, great teachers …. We’re trying to serve more and more students as the years go on, and that’s really tough. I think Kansas City is a wonderful and unique city, but for folks in other ed-reform cities on the coasts or across the country, it’s not particularly lucrative or attractive to come here.”

Lofthus said that her new role as CEO will allow her to focus on what the next five years hold for the Kauffman School, as well as how to make it part of the broader solution to improving education in Kansas City.