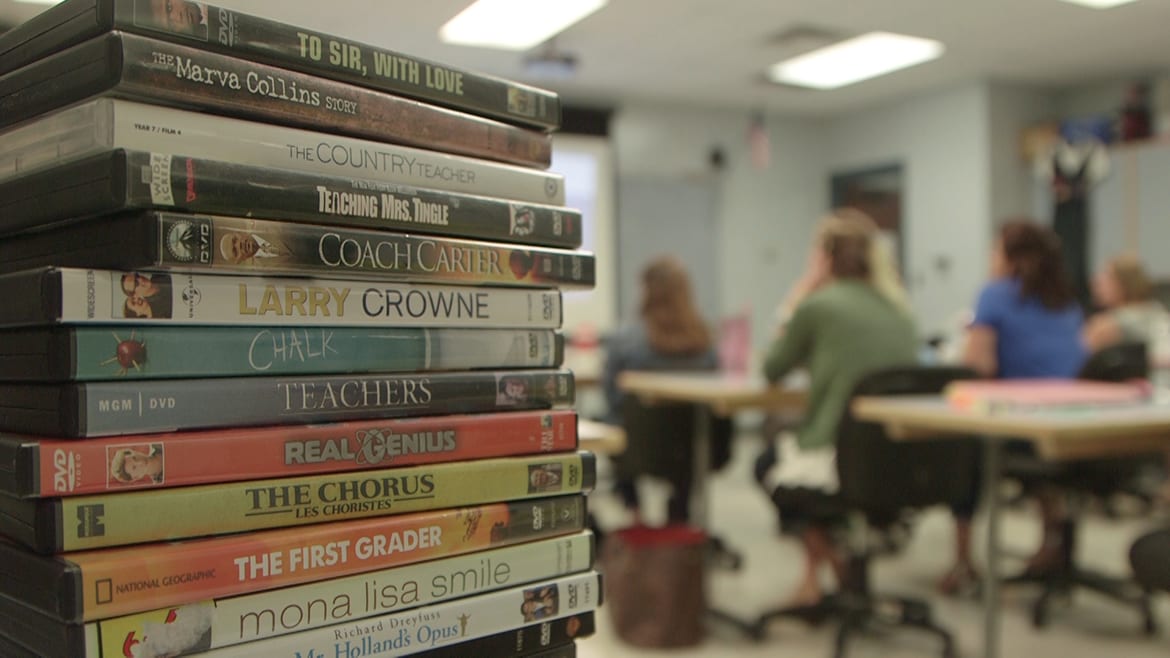 With debates over teacher tenure and educator evaluations happening in Kansas and Missouri, it’s easy to see how teaching may be one of the most maligned professions.

This summer, as part of a course at the University of Saint Mary’s, local practicing educators took a hard look at how teachers are portrayed in television and movies, as well as how these depictions influence or reflect public perceptions.

From “Dead Poets Society” to “Bad Teacher,” teachers on the screen tend to fall into a handful of extreme stereotypes Dr. Carolyn Doolittle, who taught the course, said.

While the portraits of teachers on the screen by no means started this “war on teachers,” they do seem to reflect current issues.

For example, proponents of eliminating teacher tenure and due process rights, which require public schools to go through certain procedures before firing a tenured teacher, say that their goal is to make it easier to eliminate ineffective educators.

But looking at public opinion polls, it’s unclear where these bad teachers are exactly.

“A recent Gallup poll showed that, while the perception of public schools isn’t very positive, that people are very happy and satisfied with their local school systems,” Doolittle said.

But it’s not just the negative portrayals of teachers that don’t belong in the classroom that bring up issues. The class also looked at so-called “superstar teachers.”

“You think of ‘Dead Poets Society,’ ‘Blackboard Jungle,’ ‘Stand and Deliver’ and ‘Teachers’ — the protagonist was male, when, in reality, it’s very much a female-dominated profession,” said Reed Uthe, who teaches speech and theater at Lakewood Middle School and was one of two men in the class.

In addition, the teachers that are shown to make the biggest impact are ones who are relatively new or inexperienced.

Last spring, the same legislative bill that repealed teacher tenure in Kansas also eased some of the licensing requirements for teaching in the state.

“These teachers (in movies) that were just coming in off the street and being able to teach, that’s really what’s happening in society now with teacher certification kind of being pushed aside and saying that it you’ve spent some time in a profession that you can teach it without having the pedagogy classes, or discipline,” Uthe said.

If it seems hard to believe that movies and T.V. impact or even reflect overarching attitudes towards education, it’s worth nothing that on-screen teachers in high-achieving countries like Finland, Singapore and France are depicted with more respect.

“The teachers being portrayed (in foreign media) are much more respected by their students,” Doolittle said. “The opposite seems to be true in the American classroom, where even in teacher and school movies, the teachers are not well respected.”

Looking at teacher depictions in other countries was one of the main themes of the class.

“The push right now for Blue Valley (School District) is to beat Finland,” said Korene Ekstrand, who also teaches at Lakewood Middle School. “And, so, I decided I was going to research a little bit about what Finland is doing. Even though their teachers aren’t paid that much, they are held in one of the highest regards as far as occupation.”

Ekstrand added that a lot of the discussion in the class focused on how teachers might help re-educate the public.