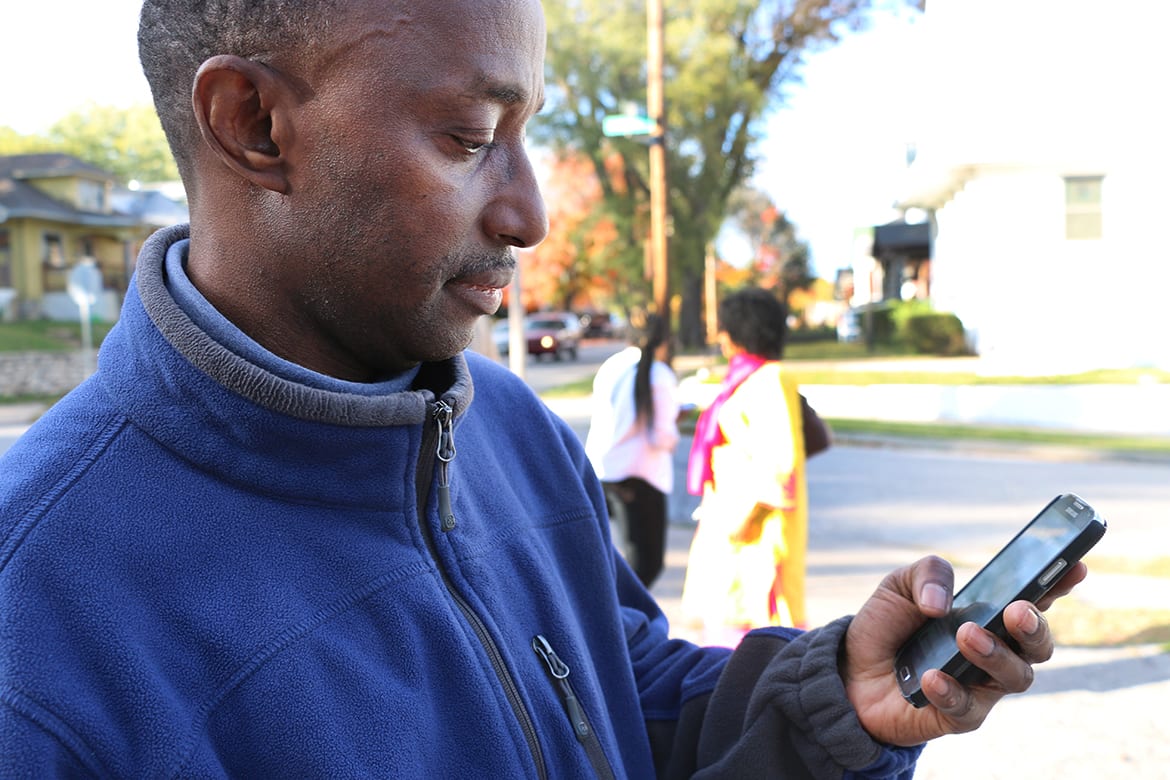 CASE member Peteh Jalloh pulls up Facebook messages on his phone from friends and family in Sierra Leone and Guinea. (Photo by Lindsey Foat)
Share this story

Peteh Jalloh lives in Kansas City, but he lived in Sierra Leone until 1995. Lately, he has limited his communication with friends and family in Africa who are dealing with the Ebola crisis to messaging back and forth on Facebook. He says talking on the phone has become too painful.

“Every day I get Facebook messages from my friends … and you will see (photos of) people strewn on the street,” Jalloh said. “Every day you hear it, you get texts, you want to call, but when you call, what are they asking for? They want money, but we get paid hourly, you know. It’s sad. We can’t afford to support everybody, and our system is an extended family system.”

Figuring out a way to help loved ones facing Ebola has been on the minds of many Kansas Citians from West Africa.
Since the outbreak of Ebola last March, Djenabou Balde has sent non-perishable food and money to family in Guinea. In August, she bought six jugs of bleach at Aldi and shipped them to her sister.

Balde’s younger sister works in the lab at a hospital where many with the disease are treated. One of her sister’s co-workers died of Ebola.
“When she heard, it hit her hard because at first I told her, ‘I don’t think it’s safe for you to go to work right now because you guys don’t have any equipment to protect yourselves,’” said Balde.

Balde said that, since the death of the co-worker, her sister has stayed home.

“Schools are closed. People are not going to work,” said Emma-mai Venn, who is originally from Liberia. “The marketplace is getting bare because, in order to get food stuff to the market, the farmers have to come to town … So it’s spiraling from one thing to the next.”

Venn also said that basic medical supplies are in high demand, and, when she recently spoke to her brother-in-law, he asked to send digital thermometers to limit contact.

“(Medical supplies) are coming, but not everybody is able to get them,” Venn said. “The people who have access to it, they’re either selling it or they’re not getting to the common people, and everybody needs those kinds of things to have with them in their homes.”

After hearing firsthand reports from family friends, Jalloh, Balde and Venn not only intimately understand the need for aid, but they also know that making a difference will take a coordinated effort.

With the support of Jewish Vocational Services, Kansas City’s West Africans communities, which are normally independent from each other, have united to form the Committee Against the Spread of Ebola (CASE).

CASE began meeting in September, and, although many of the groups are non-profits, they wanted to work with JVS as the hub for their effort because of its reputation.
“Our plan as a committee is to make sure whatever we raise goes through the right hands,” Jalloh said.

Right now they are planning to hold a fundraiser in December, from which 100 percent of the donations will go to organizations like Heart to Heart International, a health aid group based in Lenexa, Kansas, and Doctors Without Borders.

In addition to raising money, the group is providing cultural education for doctors and aid workers headed to West Africa.

“(Heart to Heart) was sending a few of their people to Liberia recently, and they came over to my home,” Venn said. “They had questions about it because they have never been to Liberia before.”

Venn shared tips with aid workers on everything from how to exchange money to issues of cultural sensitivity.

“They’re doing this from the goodness of their heart, but they’re not aware that it’s different from over here,” Venn said. “I guess now they are becoming more aware of it, but (at first) when (volunteers) wore all the gear and the white masks, it was like evil spirits or whatever, and they didn’t want them as part of their community because it’s a taboo type of thing.”

Beyond educating those headed to the affected regions, CASE hopes that by uniting they can also help educate the larger Kansas City community about this disease.

“(Most Kansas Citians) are not personally affected by it, so we just bring awareness of it together.” Balde said. “We are not asking for the sky, we’re just together to help until we see the end of it. Whatever (people) do they have to see that it’s appreciated and that it’s in the right hands.”

Once CASE establishes a website with more information on how to get involved or make a donation, this page will be updated with a link.