Could Drones Help Save People In Cardiac Arrest? 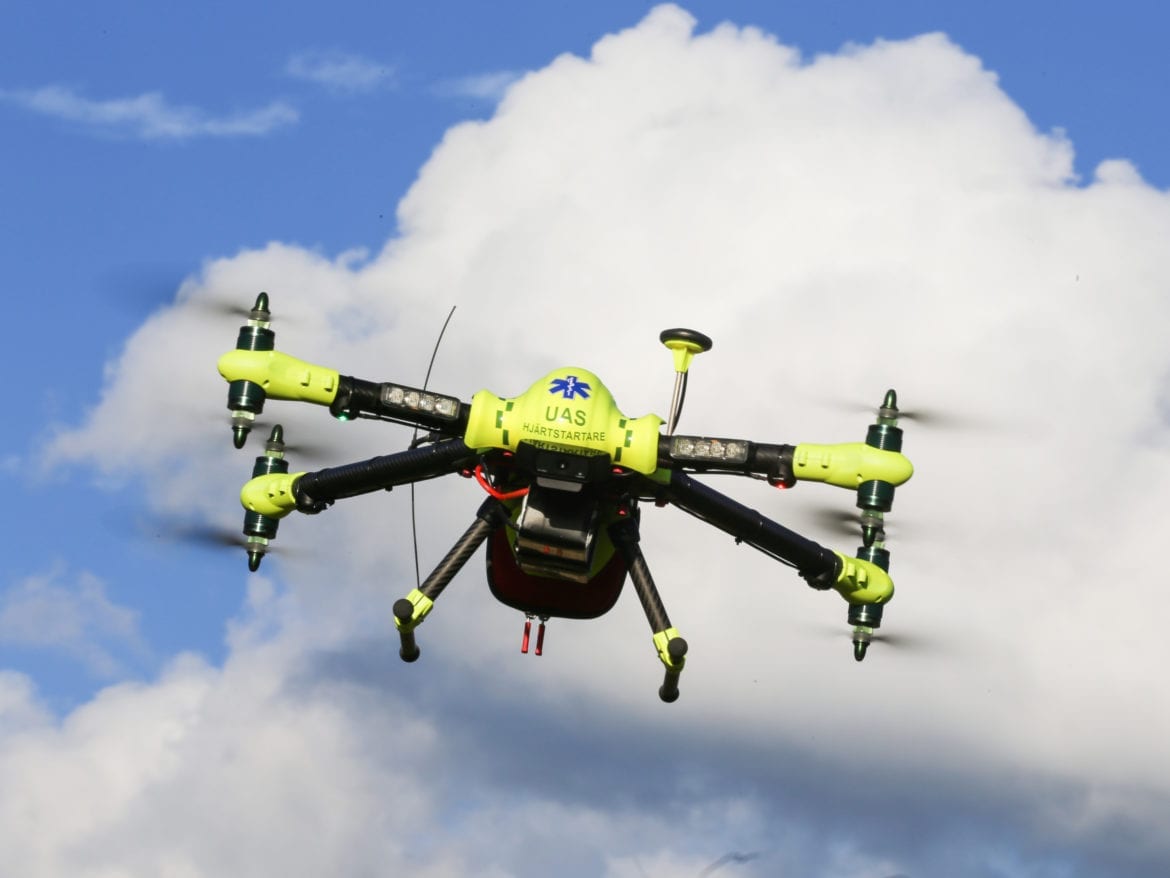 Drones carrying automated external defibrillators got to the sites of previous cardiac arrest cases faster than ambulances had, according to test runs conducted by Swedish researchers. (Photo: Andreas Claesson)
Share this story

Drones could soon be dropping off packages at customers’ doors. But researchers in Sweden have drones in mind for a different, potentially lifesaving delivery: automated external defibrillators.

Using drones to carry AEDs to people who are in cardiac arrest could reduce the time between when patients go into cardiac arrest and when they receive the first shock from an AED, the researchers say.

The more time a person spends in cardiac arrest before being shocked with an AED, the lower the chance of survival. Shocking someone within three minutes gives them the best shot.

More than 350,000 cardiac arrests happen across the U.S. in places other than hospitals each year, according to the American Heart Association — and a person’s chance of surviving is about 1 in 10. Drone-delivered AEDs beat ambulance trip times to the scenes of cardiac arrests, the researchers say in a letter published Tuesday in the Journal of the American Medical Association.

Dr. Michael Kurz, an emergency medicine professor and American Heart Association volunteer, sees the potential for AED-carrying drones to help save lives. He says this is the first time he has seen published data on the use of drones to deliver AEDs.

“This is a really neat, innovative method to combat a problem that we have been struggling with for decades,” says Kurz. “It’s the same reason we have public access to defibrillation. Airports, casinos, large public venues have AEDs on the wall because presumably, it would take a while for EMS to get there. This is, like, public-access defibrillation on steroids, where we just bring the defibrillator to you.”

The researchers used drones to deliver AEDs to places in a rural area of Sweden where people had gone into cardiac arrest between 2006 and 2014, says Stockholm-based Andreas Claesson, the letter’s lead author as well as a paramedic and registered nurse.

In each of the 18 flights that the drones made, they beat the ambulance time. The median reduction in response time was about 16 1/2 minutes. And the median time from dispatch to drone launch was three seconds, while it took emergency medical services a median time of three minutes to hit the road.

Claesson says the idea to use drones to drop off AEDs came from an analysis that showed some people in rural Sweden had to wait about half an hour for EMS to arrive on the scene of an out-of-hospital cardiac arrest situation, leading to a survival rate was 0 percent, which he calls “catastrophic.”

The team used geographic information system mapping to pinpoint locations that would be most effective for the test flights, Claesson says, and drafted predefined flight corridors that avoided flying over residents’ homes until the drones were about to land in yards.

But more research needs to be done before we start seeing AED-laden drones touching down at cardiac arrest scenes. “We know nothing about bystander interaction,” says Claesson.

One of his concerns: Sending an AED via drone means that there won’t necessarily be a medical professional on-site.

The typical cardiac arrest patient is a 70-year-old man, he says, which means spouses — who may not be trained how to use an AED — would most likely be the ones using it in an emergency situation. But dispatchers could help coach people through the process of using an AED, Claesson says.

“We know that health care professional CPR is better than layman [CPR]. But we still believe that if we can deliver a defibrillator within five minutes, the proportion of people with shockable rhythms could be pretty high,” Claesson says.

AEDs have simple enough instructions that allow just about anyone to figure out how to use them effectively, says Kurz, whose daughter has a congenital heart disease and is in fourth grade.

He taught 400 of her classmates how to do CPR and use AEDs this year.

“They’re fourth-graders, so there’s a certain amount of corralling that has to occur, but yeah, they do great,” Kurz says.

Are you as AED-capable as a fourth-grader? The Red Cross has a step-by-step guide to using an AED.

Claesson is planning a follow-up drone trial in Sweden next summer, when the local emergency medical services receive the most calls.

“Now the idea of doing this in real life with real patients, when minutes matter, can be demonstrated.”