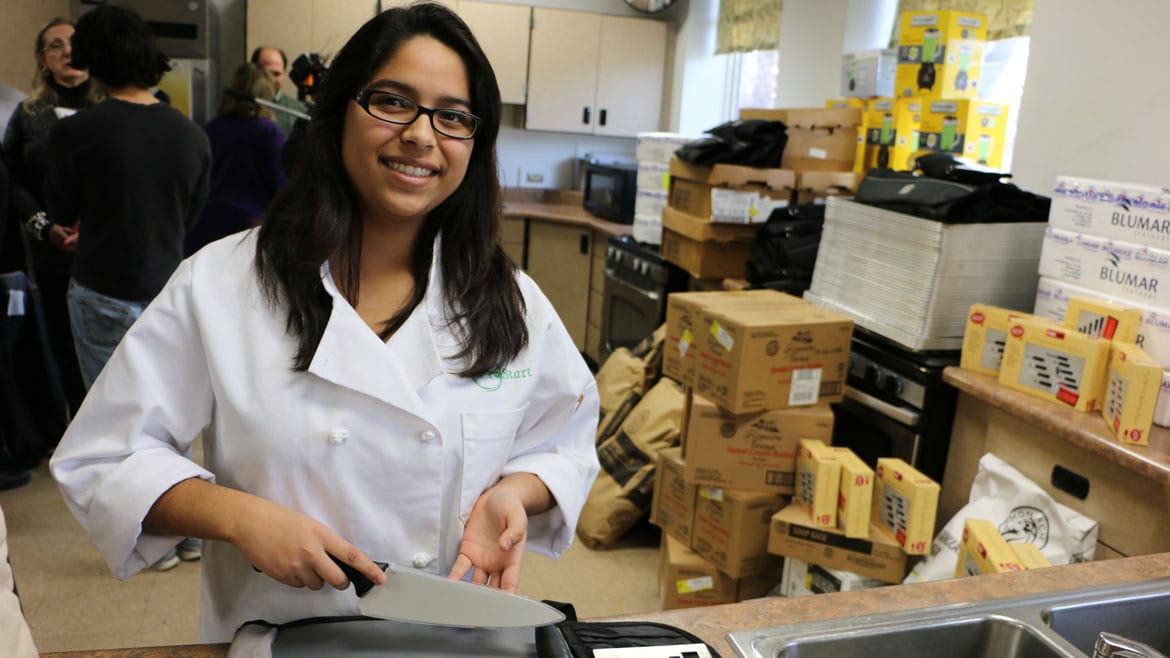 Lissette Reynaga, a sophomore at North Kansas City High School, poses with a new knife set, just a small part of the donation the culinary program received this week. (photo by Caitlin Cress/Hale Center for Journalism)
Share this story

After rearranging twice, they still can’t get the fridge door to close. Around the rest of the classroom, similar scenes are playing out. Freezers are overflowing and countertops and floor space alike are covered in kitchen tools and raw ingredients.

Because of a sizeable donation facilitated by the Greater Kansas City Restaurant Association, culinary students from the NKC school district will be even better trained to take on restaurant work after graduation. 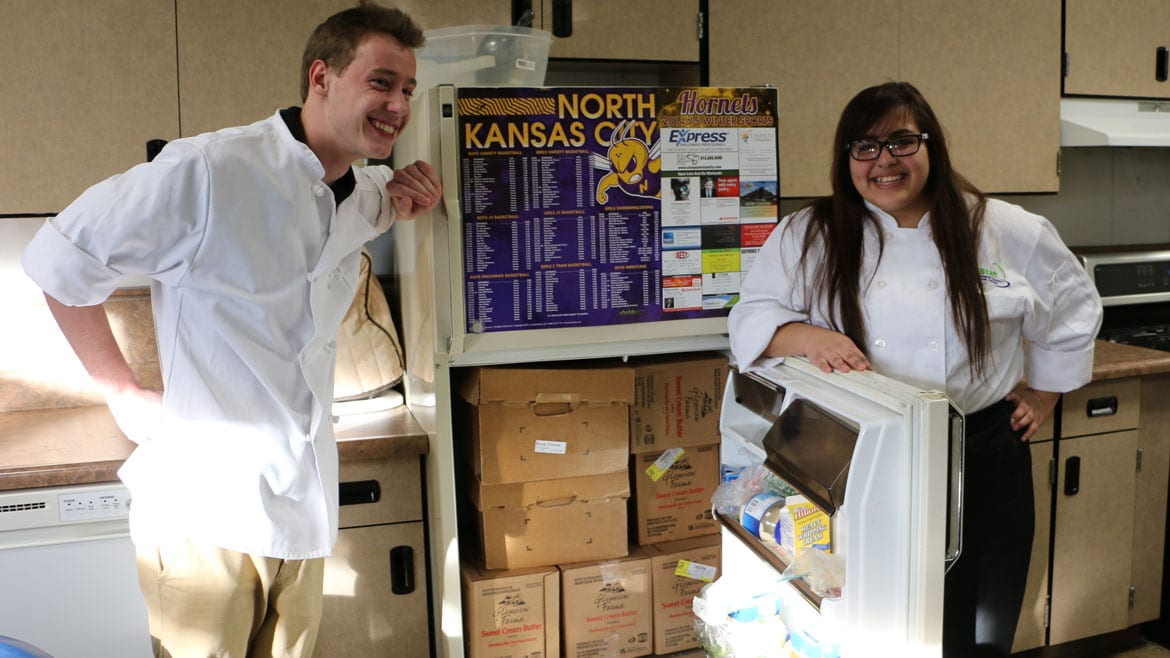 Buddy Lahl, a member of the association’s education committee, said the culinary teachers came to the association with a list of needs for the classroom. The association was more than happy to help, as they were already involved: The school district offers ProStart, the National Restaurant Association’s culinary certification program that gives students a real leg-up in the career field.

Lahl said of the program: “Any restaurateur out there would be happy to hire a ProStart student because they already have the basics. They know how to use a knife, they know how to cut up a chicken, and they know their way around a kitchen. They’re ahead of the curve, and they’re passionate about what they want.”

The passion Lahl cited is apparent in talking to the students: Santos wants to open a Mexican restaurant to celebrate her culture. Victoria Lepe, a junior, loves going “off-recipe” and putting her own twist on dishes. Rizvanovic said he has been so surprised by how exciting food has become to him.

“It’s really exciting to do new things every day and taste a little bit of everything,” he said. He described a dish he tried recently, where he cooked a spiced turkey cutlet and vegetables on the stove top.

“I didn’t think turkey could taste that good before, you know what I mean?” he said.

Dan Davidson is the manager of the bid department at U.S. Foods, one of the vendors who contributed to the donation. The company gave whole chickens, flour, butter, salmon, soup base and more. Davidson said the company jumped at the chance to donate.

“Any time you can help a student get involved in something they’re passionate about, it’s always a good thing,” he said.

Kathy Perkins, the director of national accounts at U.S. Foods, was also glad to have contributed. She said she was happy to learn that the chickens, in particular, would be used for many purposes — the students will learn to break down the bird, prepare different cuts of the meat, and, finally, use the carcass to make stock.

The donation also included pork chops from Farmland and fresh produce from C&C Produce. Cisco donated $250 vouchers to each of the four NKC high schools so they could purchase more supplies throughout the year. According to the district, 400 pounds of food and 100 pounds of equipment — including blenders, sheet pans and knife sets — were donated.

The piece of the donation pie that excited the most students? The knife sets. Lepe said the current classroom knives were old and dull, and she is excited to see how her hands-on training will improve with a nicer set of knives.

Reynaga is considering a career in the restaurant world, perhaps helping one of her aunts or uncles at one of their restaurants. For now, though, she’s enjoying the new experiences she’s gaining at school.

“At my house, we usually only cook Mexican food because I am Mexican,” she said. “It was very interesting to me to see different parts of the culinary field that I’ve never tasted or experienced before.”

Katie McCalla, the assistant director of the Greater Kansas City Restaurant Association, said Reynaga’s focus on the future is exactly what students should be getting from ProStart.

“A lot of these schools are already set up to teach Home Ec(onomics) classes, but they’re mostly moving away from those sorts of programs because we’re not teaching kids how to run a home, we’re teaching the kids how to get a job to sustain their life,” she said.

NKC School District Superintendent Todd White seemed to agree with this line of thinking. While thanking the vendors for their generosity, he said it was important to support these students.

“It’s all about the kiddos,” he said. “They’re our future, and we want to eat well.”