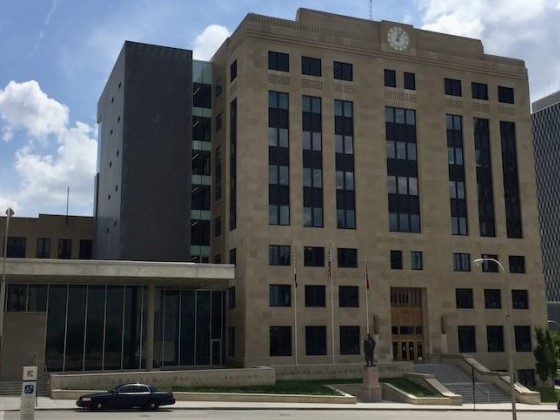 Kansas City police headquarters opened at 1125 Locust St. in 1938, one year before the city lost local control of the department. (Kevin Collison | Flatland)
Share this story

The Kansas City Council may consider whether returning the police department to local control can help reduce the city’s soaring crime rate.

Councilwoman Melissa Robinson introduced a resolution last week asking the city manager to explore the pros and cons of local control of the Kansas City Police Department, and then report his findings to the council in six months.

“We are the only city in the country without local control,” Robinson said. “We need to find out what our expectations are when it comes to results and how our dollars have been deployed… From a council perspective, the people I report to are looking for a return on their investment and how we deploy our police, particularly in the Third District where there is a high level of homicides.”

Robinson’s resolution was referred to the council’s Finance, Governance and Public Safety Committee.

Kansas City is the only major American city with a police department not run directly by city-elected representatives.

For many years, both the St. Louis and Kansas City police departments were run by state-appointed commissions, but St. Louis had local control returned in 2013.

With Kansas City regularly among the nation’s most violent cities, the community is seeking answers to better address the problem.

The city’s overall violent crime rate is 316.7 percent above the national average, according to a report in CityRating.com.

Last year, it was among the top 10 cities in the United States for per capita homicides, and there have been 124 murders so far this year as of last weekend.

There have been repeated calls in recent years for ending a police governance structure dating back to the days of boss Tom Pendergast.

During Pendergast’s years in power in the 1920s and 1930s, police corruption was rampant. To address the problem, the governor took control by appointing the five-member police commission. The lone elected commissioner is the mayor.

The police department budget this year is $255 million. The department has about 1,400 sworn officers and 600 other employees.

Early in his administration, former Mayor Sly James tried to tackle the topic of local police control, but his effort failed in 2013 when a committee he appointed to study the idea recommended against it.

Councilwoman Robinson, who could not be immediately  reached for comment, was elected to represent the Third District last summer. Her city biography indicates she’s had a longstanding interest in criminal justice.

Robinson began her social service career at the Ad Hoc Group Against Crime, where she served as the director of crisis intervention, assisting families in navigating the region’s social service and criminal justice systems, according to her bio.

In her resolution, Robinson asks the city manager to include a survey of community leaders in his analysis.

Her resolution asks the city manager to report back to the council within six months of the adoption of the resolution with his or her findings and conclusions.