Above image credit: The Seventh Church of Christ, Scientists, would be demolished to make way for the Cocina47 project. (Kevin Collison | CityScene)
Sponsor Message Become a Flatland sponsor

The City Plan Commission rejected the Cocina47 project Tuesday, saying the height of the nine-story proposal was an insult to the years of planning and community meetings that created policies to guide development at the Country Club Plaza.

“One of the most valuable tools that the city and our commission has is to create reliable ground rules for how development is made and to stick to those rules,” said Commissioner Ashley Sandowski.

“To me, 115 feet off of the plan … seems like it’s a slap in the face to the entire process of planning here.”

The commission voted unanimously to recommend denial for the development proposed by Matt Pennington of Drake Development, which called for three floors of restaurants and six upper floors devoted to residential condominiums.

That recommendation now goes to the City Council, which will have the final say.

Pennington is seeking to exceed the 45-foot height limit required by the Plaza Bowl overlay by 115 feet at the northwest corner of 47th Street and Pennsylvania Avenue. It’s currently the location of The Seventh Church of Christ, Scientists. The congregation would relocate to Cocina47.

The proposal comes at a time when the direction of the Plaza, which has had numerous vacancies in recent years and is under joint ownership by two national shopping center operators, is a hot topic.

“There’s 28 vacant storefronts on the Plaza,” he said. “We’ve seen a loss of key tenants, Nike, Houston’s, Helzberg Diamonds, and as of recently the Nordstrom flagship store has been a major blow to tenant recruitment.

But the overwhelming testimony during the two-hour hearing was from opponents, both neighborhood groups and businesses.

They said the Plaza Bowl overlay, which limits taller buildings to the outer edges of the historic Plaza area, was vital to maintaining its character.

The developer argued his project should be exempted from the height restrictions, pointing out its proximity to taller buildings including 46 Penn Centre, immediately to the north, and Valencia Place across Pennsylvania.

An official at Lockton Cos., the primary tenant of Valencia Place, wrote a letter supporting the Cocina47 plan.

“Therefore, an economically vibrant and safe Plaza is critical. Matt Pennington has proposed a great multi-story plan for Cocina47 that would benefit Lockton as a neighbor and for our employees.”

But Ken Block of Block Real Estate Services, the developer of 46 Penn, slammed the proposal, saying it would block the views of tenants in his 14-story building that opened in 2020.

He said a private appraiser estimated its value would drop $40 million if it was obstructed.

“This comes down to rules,” Block said. “I don’t want somebody to have a different set of rules than we have.”

Besides the height, another big issue with the Cocina47 plan is its lack of onsite parking. To achieve that goal, the developer had reached agreements with Lockton to use 125 spaces in its garage, and another 127 spaces at a garage at 47th and Belleview.

But several opponents, including a representative for Taubman, a Plaza co-owner, argued that restaurant patrons would use nearby Plaza garages, which are funded partly through a special sales tax charged on sales at Plaza businesses.

“If not convenient, they’ll use Plaza garages,” said Darryl Herring, Taubman vice president of development and construction. “Plaza parking is for customers.”

The Plaza Bowl overlay process also was questioned by the developer and Lockton. While the zoning guidelines date back to 1989, they were not “codified” or made legally binding until 2019.

The City Council approved the stricter enforcement over the objections of the City Plan Commission at the time, which questioned whether the lines were arbitrarily decided for political reasons.

In his letter, Serrault said Lockton shared that concern.

“There are multiple high-rise buildings at the same street line on either side of the proposed Cocina 47,” he wrote.

Returning to the Plaza’s future, Tyler Enders of Made in KC Marketplace, one of the shopping district’s more successful retailers, slammed the stewardship of Taubman and said the Cocina47 project was needed.

“What I want to see most of the Plaza and what my business partners and vendors want to see is activity,” he said.

“We want it to be the most exciting place in Kansas City and for that you need investment. If you look at what Taubman has done, they haven’t invested in the Plaza.

“You have to think outside of the box, you have to be aspirational and what I see is someone (Drake) who’s trying to be incredibly aspirational.”

But Vicki Noteis, president of Historic Kansas City and a former city planning director, said the Cocina47 project was not a reason to ignore the zoning laws now in place at the Plaza.

“Small necessary deviations can always be accommodated and negotiated, but approving the first deviation from this plan for over 100 feet is ridiculous,” she said.

“This is a 100-year decision. Amending the Plaza plan and especially the zoning ought to be for a really good reason. Don’t waste that on this project.” 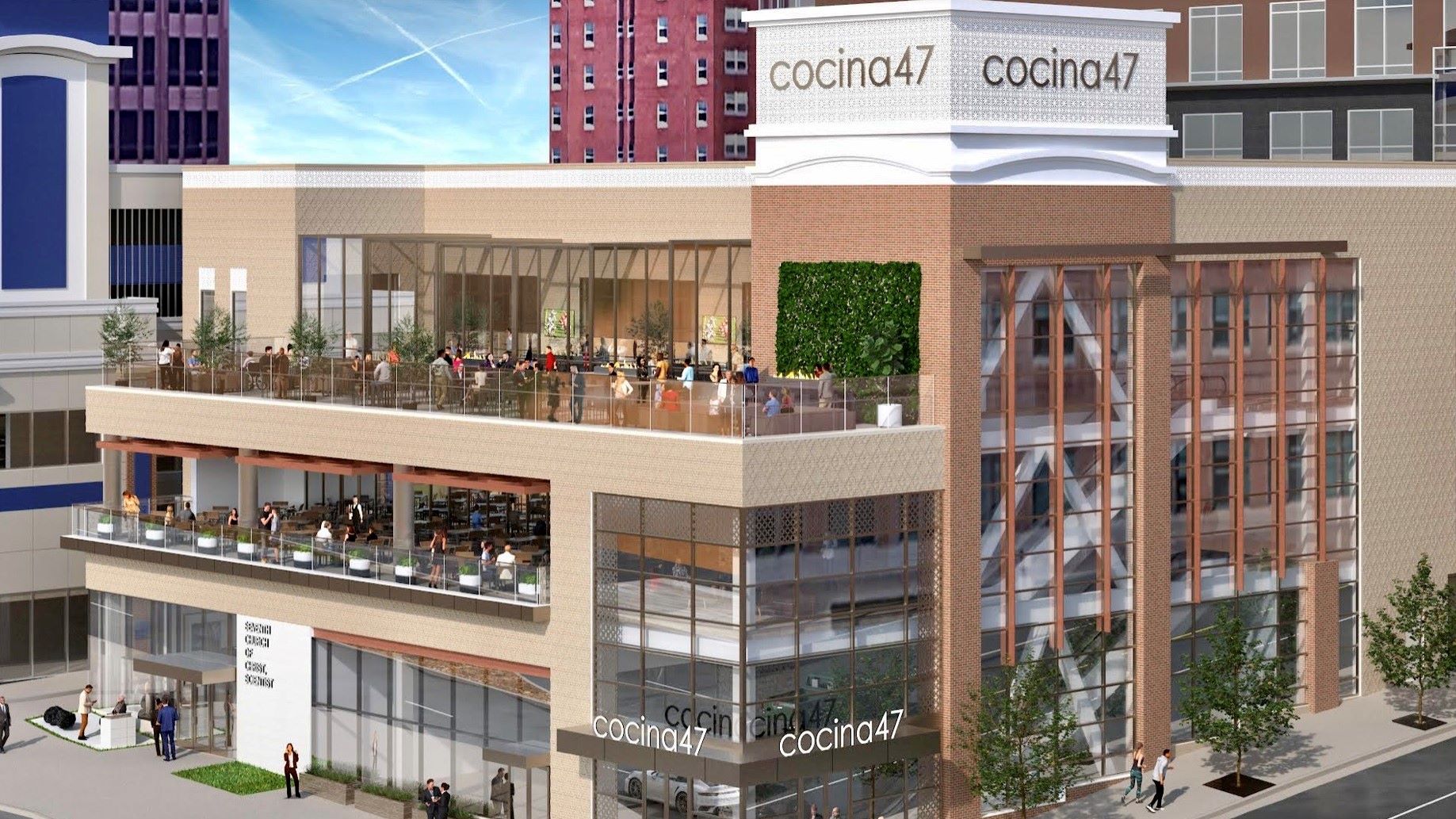 Plaza Development Controversy Erupts, 1940s Church Likely Casualty The Country Club Plaza is a development flash point again with the likely demolition of an attractive, but unprotected, old church and a developer’s plan to replace it with a three-level restaurant project.