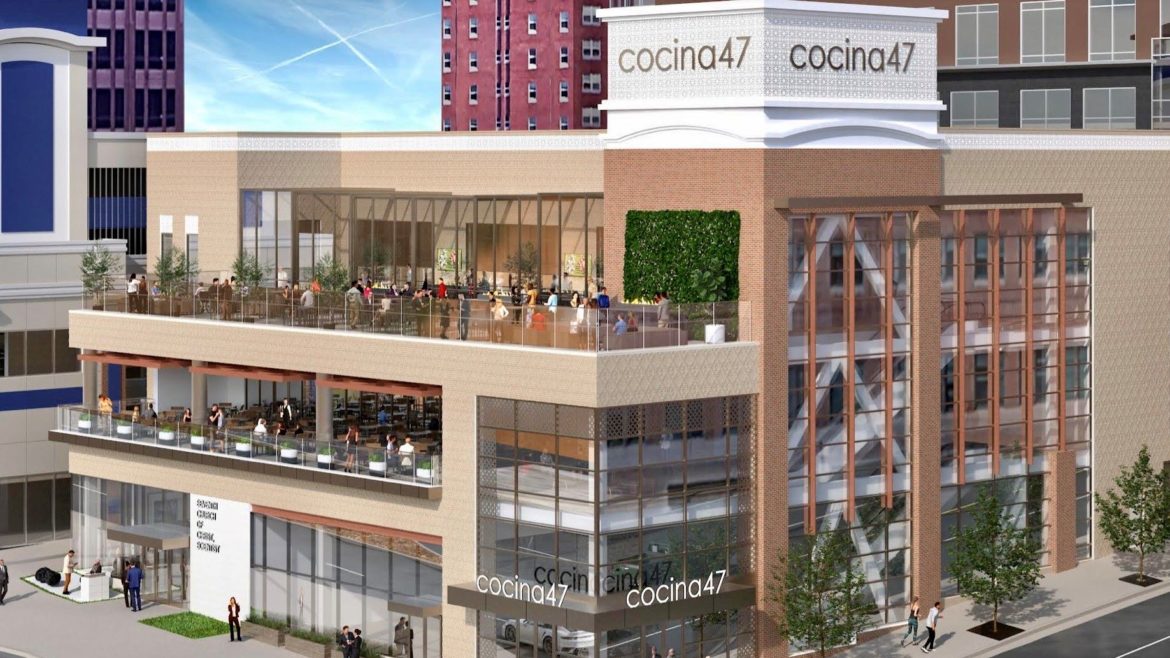 Drake Development would like to build a three-level, three-restaurant complex on the site of the Seventh Church of Christ, Scientists at 47th and Jefferson streets next to the Country Club Plaza. (Rendering | Drake Development)
Share this story

The Country Club Plaza is a development flashpoint again with the likely demolition of an attractive, but unprotected, old church and a developer’s plan to replace it with a three-level restaurant project.

Drake Development intends to raze the Seventh Church of Christ, Scientists at 47th and Pennsylvania and build a structure that would add three restaurants to the Plaza, one on each floor. The project also would include worship space for the existing church congregation.

The struggle, however, is not so much about saving the 90-year-old church, which has no local historic landmark protection, but objections that Drake’s “Cocina47” proposal would exceed the height restrictions of the “Plaza Bowl overlay” zoning by 20 feet and include no parking.

“It’s a small site, too small to have parking on it. But he bought it knowing about the parking and height requirements,” said Kansas City Councilwoman Katheryn Shields, who’s attempting to negotiate a compromise.

“He doesn’t need to solve all the problems, but he has to comply with the zoning in place,” Shields said.

The development dispute is perhaps the sharpest in the Plaza area since the battle in 2010 over a plan by its former owner, Highwoods Properties Inc., to build a new headquarters for the Polsinelli law firm that would have razed the Balcony Building at 47th Street and Broadway.

That proposal caused an uproar in the preservation community and Polsinelli ultimately decided to move into a new building on the west side of the Plaza at 48th Street and Roanoke Parkway.

Developer Matt Pennington of Drake said his proposed restaurant project is the kind of development necessary to ensure the future viability of the Plaza, which he believes has too much retail space for an evolving marketplace that’s shifting to online shopping.

Current Plaza owner “Taubman is doing the best they can, but at the end of the day there’s way too much retail on the Plaza,” Pennington said. “And when you have too much dark space and are not allowed to to consolidate or renovate to other uses, retailers don’t want that.

“I have nothing against Taubman, I don’t want a bad relationship, but Taubman needs to be allowed the flexibility to change its uses from retail to more dense uses.”

But Taubman Realty, which bought the Plaza along with Macerich Co. in 2016, likes the current zoning requirements.

Taubman has joined Block Real Estate Services, Historic Kansas City, Friends of the Plaza and other neighborhood leaders in a joint statement slamming the Drake plan.

“The proposed Cocina47 development is flatly incompatible with the Midtown Plaza Area Plan and the Plaza Bowl overlay,” according to the release.

“The departures cannot be accommodated with minor tweaks to the plan and zoning. City approval of this development could set in motion a hodge podge of proposed development projects in and surrounding the Plaza.

“It could lead to a collapse of overlay ordinances in Kansas City neighborhoods and is a threat to area planning.”

As for saving the Romanesque Revival-design brick church that opened in 1942, it appears to be a lost cause.

Pennington said the building is filled with asbestos and obsolete, and needs to be razed.

Historic KC, the area’s primary historic preservation group, acknowledged the city is exceedingly reluctant to enact local landmark protection for a structure without its owners permission.

“In Kansas City, you just can’t get something locally designated over owner objection,” the group said in an alert the group sent members last month.

“It’s not a requirement, but a political reality,” the alert continued. “The only exception is the City Council approved the designation of Union Station over the owner’s objection.”

Shields said with that exception of Union Station, she was unaware of any building being given landmark protection from demolition against its owners wishes.

Her focus is more on the Plaza Overlay District. The building, as originally proposed by Drake, was about 65 feet tall, 20 feet taller than the 45-foot limit.

“If we can do the height, I’m willing to take the heat from the preservation community,” she said. “It needs to abide by the overlay and parking regulations.”

As for Drake’s allegation the Plaza’s retail foundation was shaky, Taubman isn’t buying his argument.

“Drake Development can lobby for its project with city officials using outrageous, unfounded conjecture regarding the Plaza’s alleged demise as its platform,” the shopping center owner stated in the release.

“But the truth is that the Plaza successfully met the challenges faced by the changing retail environment and the pandemic head on. It is strong, and it is well positioned to thrive.”

Taubman also accused Drake of trying to provide parking for its project by utilizing garages built to serve the Plaza itself. The proposed project is just outside the formal Plaza boundary.

The garages are maintained by special one-cent sales tax charged at Plaza businesses.

“The unprecedented poaching of Plaza parking will be a direct detriment to Plaza tenants and their customers and the sustainability of the Plaza,” according to Taubman.

Pennington is no stranger to the Plaza, being well along on a $44 million redevelopment of the former Jack Henry building next to the proposed Cocina47 site. The building is being renovated to become a Chiefs Fit health club.

The developer criticized the Plaza Bowl height restrictions enacted by the City Council in 2019 as hampering the continued revitalization the shopping district needs to remain viable.

He estimated if the project is approved, it would yield $500,000 annually in new sales tax revenues to the city.

Pennington suggested that if his restaurant project is required to meet the height restriction imposed on the actual Plaza, it should be allowed to take advantage of the shopping district’s garages.

At this point, the developer is not planning to seek tax incentives for the project.

“Not at this time, but if the use of public parking on the Plaza truly becomes an issue we will be forced to request incentives,” Pennington said.

Shields has made progress in discussions with Drake Development to reduce the height of the building. The developer originally wanted significantly higher ceilings for the restaurant spaces, she said.

“I’ve been meeting with them since last fall,” she said. “I think we’re making some progress.”

Pennington said the higher ceilings are necessary to meet the demands of modern restaurant operators. The plan also includes large outdoor seating areas for each restaurant.

As for parking, Shields suggested that Drake negotiate with Block Real Estate, which owns the 46 Penn Centre office tower immediately to the north of the development site, or Taubman for the spaces his development is required.

“These (Plaza Bowl overlay) standards ensure that all new projects are respectful of the Plaza design aesthetic that dates back to 1923,” Block stated.

“This proposed development far exceeds height restrictions and forces its visitors to seek on-street parking in the nearby residential neighborhood and parking spaces that have been purchased and maintained by neighboring property owners.”

Pennington acknowledged he has more negotiating ahead before he submits a development plan to City Hall. If he’s successful, demolition of the old church would occur before the end of this year with anticipated completion of the project in 2024.

“I’m bringing three amazing restaurants to the city and we’re arguing over a few feet and some parking,” he said. “Logic is not prevailing here.

“Overall, Kansas City wants the Plaza to maintain its luster and keep it amazing.”

Dillard’s Said to be in Talks for Plaza Nordstrom Site

Project Has Been in Limbo for Two Years