An Election Outcome You Might’ve Missed 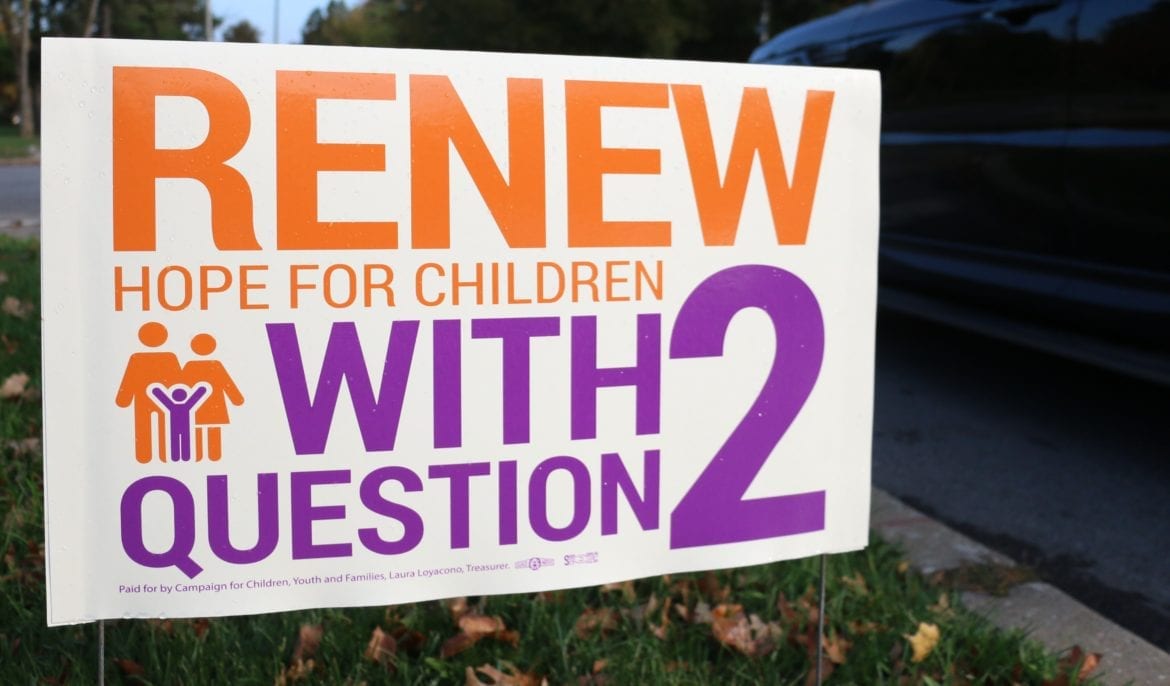 This sign at at 63rd Street and Ward Parkway in Kansas City urges voters to enact a new Jackson County sales tax to fund programs for at-risk kids. The down-ballot question passed Tuesday with 59 percent of the vote. (Photo: Mike Sherry | Flatland)
Share this story

It might be easy for social services supporters in Jackson County to be asking “What if?” in the wake of Tuesday’s election, when residents resoundingly approved creation of a Children’s Services Fund through a new eighth-cent sales tax.

After all, the projected proceeds could have been nearly three times larger, if not for bureaucratic snafus that hampered an effort to help more at-risk kids in the region. But that was not the case in the wake of a victory amid other taxes that went down to defeat.

“We’re pretty excited,” said Lisa Mizell, CEO of the Child Protection Center and a leader of the Jackson Children’s Services Fund Coalition. “I was pretty hopeful that it would pass. We’re very, very grateful to the voters of Jackson County for approving it.”

Approved with 59 percent of the vote, the new tax is expected to generate about $15 million annually for residents of Jackson County. The tax expires in seven years without reapproval from the voters, and Mizell said it should begin generating proceeds in April.

A Missouri statute authorizes the creation of the funds to assist children and youth through age 18. Services include temporary shelter for abused or emotionally disturbed youth, services for unwed mothers and unmarried parents, outpatient chemical dependency and psychiatric treatment programs, and home- and community-based family intervention programs.

Proceeds also may be used to provide crisis intervention services and prevention programs that promote healthy lifestyles among children and youth and that strengthen families.

The Jackson County executive will appoint an independent, nine-member citizen board to oversee the fund, comprising at least one member from each of the county’s six legislative districts. The board will determine the procedure and timing for distributing the money.

Caleb Clifford, chief of staff for County Executive Frank White, said White supported the tax to create the fund “and takes very seriously his duty to appoint the board who would oversee it.”

Funds like that are sorely needed in Jackson and Clay counties, said Robin Winner, another leader of the coalition and executive director of Synergy Services Inc., a Parkville-based mental health agency serving child and adult victims of domestic violence, abuse and neglect.

Winner cited a 2014 study by the University of Missouri-Kansas City, with help from the Mid-America Regional Council, that concluded Jackson and Clay counties combined had a roughly $80 million shortfall for children’s health services.

The time is right to establish the funds in both counties, she said, “because I think there are so many challenges that children are confronting.” Putting off help is not smart, because “the longer we wait, the worse these problems become.”

She referenced Clay County because it was included in the coalition’s initial plans, which called for establishing a quarter-cent sales tax in Jackson and Clay counties, which would have raised about $40 million annually.

But missteps within county government torpedoed the effort in Clay, and similar confusion led to the scaled-back version that appeared on the Jackson County ballot.

In Clay County, the coalition submitted 11,000 signatures to the election board on Aug. 8, one day before the deadline.

About two weeks later, the board determined about a third of the signatures were invalid, which the coalition corrected by gathering more signatures. The election board ultimately certified 8,507 signatures, well above the number that was required.

The petitions then languished, awaiting a procedural move that did not come by the Aug. 30 deadline for the Clay County Commission to act. Election board attorney Jon Krebbs said the panel never received an order from an arm of county government — as required by state statute — to submit the petitions to the commission.

The coalition then failed in its effort for outside intervention when the Clay County Circuit Court and the Western District Court of Appeals rejected its filings.

In Jackson County, the coalition got derailed by differing interpretations on the proper benchmark for determining the number of signatures that were needed to place the question on the ballot — whether the percentage should be based on the number of county votes cast in the last gubernatorial race or in the last election for county executive.

In the end, the coalition asked the Jackson County Legislature to place the measure on the ballot. Legislator Dennis Waits proposed reducing the tax from a quarter-cent to an eighth-cent and limiting it to seven years, and the legislature approved it by an 8-0 vote on Aug. 22.

“Anytime you propose something like this,” he said, “I think it’s better to go into it cautiously, because no matter what the need is, you don’t know what they’ll be able to accomplish.”

If it works, Waits said, voters can renew it.

“If it doesn’t work, that’s the time to reconsider it and see if you can do it better,” he said.

There is some disappointment that the tax is smaller than originally envisioned, Mizell said. But, she added, “You can’t be disappointed at the prospect of getting $15 million for children.”

Clarification: The story has been updated to clarify the coalition’s signature-collection outcome in Clay County, and to adjust the figures explaining how the coalition fared in meeting the differing signature benchmarks cited in Jackson County. The latter modification came from updated information provided to Flatland.

— Jerry LaMartina is a freelance writer living in Shawnee. Comment below or find us on Twitter @FlatlandKC