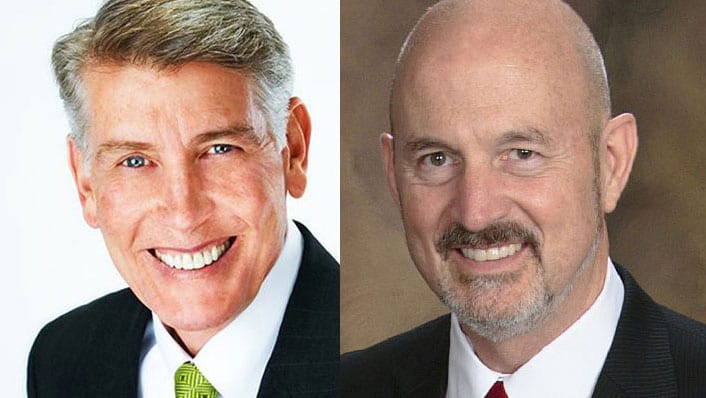 The winner of the election between Democrat Dennis Anderson (left) and Republican Ken Selzer will produce a successor to longtime insurance commissioner Sandy Praeger.
Share this story

The top-of-the-ticket races may be commanding the most attention in this year’s Kansas election, but significant issues also are in play in some of the down-ballot contests.

The insurance commissioner’s race is one example. Like the higher-profile races, it features candidates with very different perspectives on key issues. But unlike those races, the contestants remain largely unknown to Kansas voters. A poll taken as the race heads into its final week showed Republican Ken Selzer leading Democrat Dennis Anderson by double digits – but nearly half of voters didn’t know either candidate.

Nonetheless, some big issues are in play, including the Affordable Care Act, the controversial federal health reform law.

Selzer, a conservative, wants to see it repealed. Anderson carefully avoids endorsing the law but says he supports the goal behind it of making affordable health coverage available to millions more Americans.

“The core issue is how do we provide protection for the most people?” Anderson says, adding that using tax credits to help the uninsured purchase coverage ultimately will reduce the number of hidden charges built into insurance policies and hospital bills.

“People don’t often understand that the population that doesn’t have coverage costs us in terms of higher commercial insurance premiums or additional social programs,” Anderson says. “If they get ill and they go to a hospital and they can’t pay, who pays the bill? Well, we all do. It’s just that we’re distributing it in kind of an invisible way right now.”

Selzer, on the other hand, opposes the ACA as an unnecessary intrusion into the private marketplace. He says the federal government shouldn’t be providing subsidies to help the uninsured purchase private coverage.

“It (the reform law) essentially nationalized a program that should be in the marketplace,” Selzer says. “I am going to advocate for the repeal – and, if we fail at repeal, for changes in Obamacare.”

But, he says, regardless of what happens with the repeal effort, “We’re going to do the job that we’re required to do by law to educate and advocate for consumers and to regulate insurance companies and license agents.”

Neither Selzer nor Anderson will have a role in deciding the fate of the controversial health reform law. However, their views likely will influence aspects of the law’s implementation in Kansas, such as the extent to which the insurance department is involved in consumer education.

About 12.6 percent of Kansans – nearly 360,000 people – were uninsured prior to implementation of the ACA. Approximately 57,000 Kansans purchased ACA coverage during the first enrollment period, which ran from Oct. 1, 2013, through March 31. A second open-enrollment period begins Nov. 15 and extends through Feb. 15, 2015.

The candidates disagree sharply on the formation of a compact to free participating states from federal health care regulations.

Led by conservative Republicans opposed to the ACA, the Legislature and Gov. Sam Brownback approved the state’s membership in the health care compact. Since then, Insurance Commissioner Sandy Praeger, a moderate Republican who has endorsed Anderson, and groups representing Kansas seniors have raised concerns about language in the enabling legislation that allows participating states to take control of the Medicare program within their borders.

“It’s quite disconcerting when you hear the folks who passed it trying to reassure you that it (a Medicare takeover) would never become reality while at the same time wishing that it did,” Anderson says.

More than 450,000 Kansas seniors are enrolled in Medicare.

In the primary, Selzer supported the compact, saying he was for “anything that brings decision-making to a more local level.”

But in recent weeks, as more people raised concerns about the Medicare issue, Selzer has sought to downplay it by stressing that as commissioner he would play no role in establishing it. That, he said, will be up to Congress and to members of the Kansas Legislature.

“If the multi-state compact does go forward, there will be an extensive amount of discussion in the state of Kansas before it gets implemented,” Selzer says. “And it will be a legislative issue, not an insurance commissioner issue.”

Anderson’s opposition to the compact and his support of expanding Medicaid eligibility to more low-income Kansas adults are the reasons that Praeger reached across party lines to endorse him.

“I would hate to see politics controlling the insurance department,” Praeger says, equating support of the compact and opposition to Medicaid expansion as litmus tests for conservatives. “I think it’s so important that we have an insurance commissioner that will be dedicated to good public policy and not use the office for political gain.”

The low-budget Anderson campaign is working to get the word out about Praeger’s endorsement, believing that it alone could be enough to convince some moderate Republicans to join Democrats in voting for him.

Both Selzer and Anderson are touting their business experience on the campaign trail. Anderson heads a family company that trains insurance agents across the country and prepares them for licensure examinations. Selzer is a certified public accountant with decades of experience in the insurance industry.

Both candidates say they will take a balanced approach to regulating insurance companies while working to protect consumers. And they generally agree that tighter regulation of ACA navigators is needed.

Navigators undergo criminal background checks and receive specialized training but are not licensed.

Selzer wants to change that.

“I think navigators ought to be licensed to operate here in the state of Kansas,” he said.

A bill that would have required navigators to be licensed and imposed restrictions on the kind of guidance they could provide consumers was passed by the Kansas Senate during the 2014 session, but it stalled in the House.

Anderson stops short of saying that navigators should pay a fee and be licensed, but he favors requiring them to be registered with the insurance department.

“That way if you find that they are acting inappropriately, you have some capacity to remove them,” Anderson says. “After all, they are people who are interacting with consumers and pointing them in a particular direction.”

Jim McLean is a health reporter with Heartland Health Monitor, a reporting collaboration among KCUR Public Radio, KCPT Public Television, KHI News Service and Kansas Public Radio. He is based at KHI. Click here for the original article.