Braving a line of hundreds, in freezing temps, for free dental care 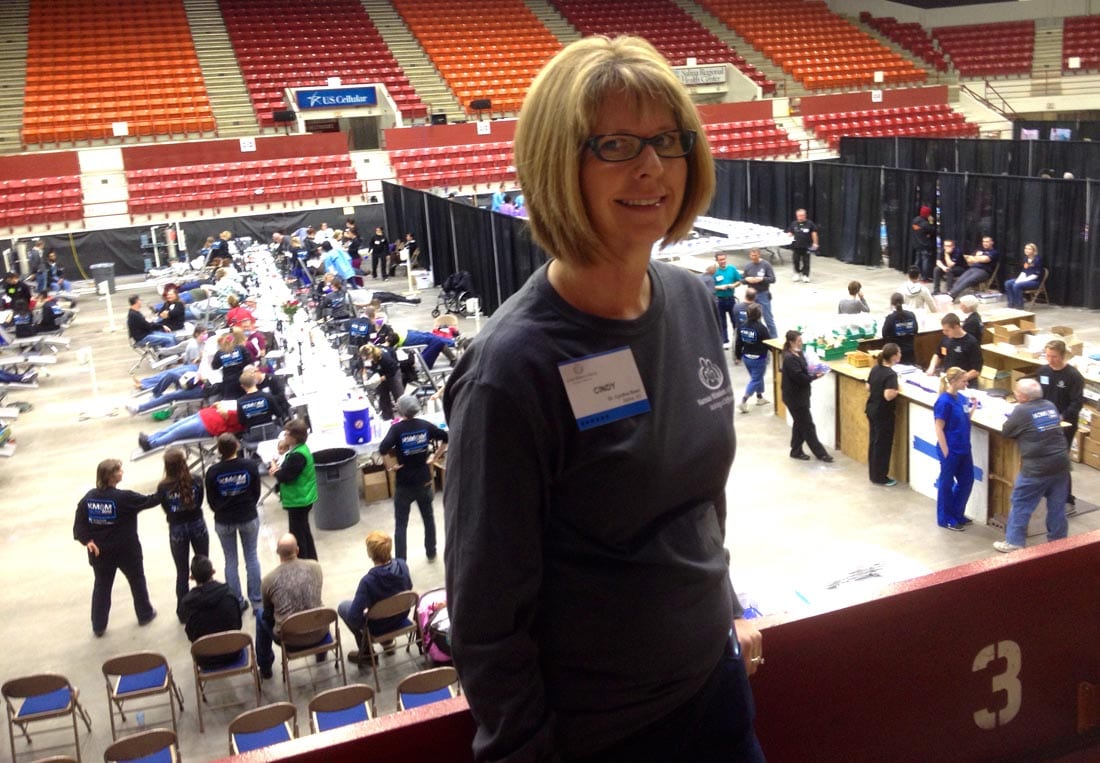 Imagine waiting in line for a day and a half just to get a tooth pulled or a cavity filled. Lots of people did just that over the weekend in Salina, where about 400 dental professionals and hundreds of other volunteers donated their time Friday and Saturday to provide free dental care to 1,400 people at the 14th Kansas Mission of Mercy.

The Kansas Mission of Mercy is an act of charitable giving on the part of dentists, hygienists and others who volunteer their time and services to those in need. Patients began lining up Wednesday afternoon outside Salina’s Bicentennial Center although the free dental services didn’t begin until Friday morning — some 36 hours later.

Salina orthodontist Cindy Reed said the doors opened Thursday night so people wouldn’t have to spend a second night in the freezing temperatures. Patients came from all across Kansas and beyond.

“We had somebody from western Texas at our clinic — Amarillo. That’s a long drive from here,” she said.

“There’s a lot of stories that just break your heart of the people that come through this line,” Reed said. “Today I saw a 17-year-old, and he had destroyed all of his teeth in his mouth, and so I was doing the dental screening for that. And we ordered extraction of all the rest of his teeth, so at 17 he’s going into dentures.”

Reed said the primary goal of the Mission of Mercy is to relieve the pain patients are experiencing due to untreated dental needs.

“Little far to come, but when it’s free, it’s free,” said John Baker, who drove from Hutchinson with his adult daughter and her father-in-law. “It’s a good deal, especially if you don’t have insurance or you can’t afford it right now. They do a wonderful job.”

Abilene resident Pamela Rutter has a dentist. But like many of those who waited in line, she doesn’t have dental insurance.

“I have been able to get, at different times, root canals, but I never have enough money to get the seal and the crown, and all like that, so then eventually they crumble, and, you know, they don’t last,” she said.

Rutter recently earned a college degree but hasn’t found a full-time job with benefits. If Rutter lived in a state where Medicaid had been expanded, her income likely would qualify her for dental coverage. But Kansas is one of the states that chose not to expand Medicaid under the federal health reform law. And that leaves Rutter, and thousands more like her, on their own.

That Kansas has elected not to expand Medicaid is troubling to Tanya Dorf Brunner, who heads the advocacy group Oral Health Kansas.

“A lot of folks here are the working poor,” Dorf Brunner said. “They have jobs. They have means. But they don’t have any way to get insurance.”

Dorf Brunner said dental benefits available through KanCare, the state’s privatized Medicaid program, could help some adult Kansans, although in a limited way.

“There’s really two things any adult has access to: a cleaning and an X-ray, and an exam every year,” she said. “And then they have access to emergency extractions — that’s maybe a life-threatening abscess, something that’s really dangerous. In those cases, they could have an extraction. But that’s it, no prevention.”

Dorf Brunner cited a comparison made by a state senator from Topeka.

“They set these kind of clinics up in other countries because they don’t have access. This is wrong.”

“Laura Kelly has said, ‘It’s like not treating diabetes, but treating the amputation you need at the end.’ I think that’s a great analogy,” said Dorf Brunner.

Staff and volunteers from Oral Health Kansas conducted an exit survey at the Mission of Mercy, in conjunction with the Kansas Dental Association.

“We can show the Legislature that this is the need, that there are this many hundreds and thousands of people that seek this service every year, because they don’t have any other way to get services, and that there’s a cost-effective way to deliver dental services short of emergency extractions,” said Dorf Brunner.

According to Oral Health Kansas, the state spent $1.4 million on emergency dental services for 12,000 adults in 2011. If the Kansas Medicaid program had spent an additional $3 million that same year, it could have offered a full dental benefit to nearly 20 times that many people.

Given the deep budget hole in Kansas, Dorf Brunner isn’t optimistic that the group’s plea will gain much traction in the Legislature. But she said continuing to rely so heavily on the goodwill of dental professionals to offer free care at one site, once a year, is not enough to meet the need.

“Because this is third world,” Dorf Brunner said. “They set these kind of clinics up in other countries because they don’t have access. This is wrong.”

Bryan Thompson is a reporter for Kansas Public Radio in Lawrence, Kan., a partner in the Heartland Health Monitor team.