The business day was ticking away as Sarah Wilcher waited on the phone.

She was an hour into a desperate protest of an insurance decision about her seriously ill daughter, Piper. By around 5:10 p.m., she realized everybody was gone.

“They just left me on hold,” Wilcher recalled recently of that day four years ago.

Piper’s treatment team – the one assembled by her insurer, Blue Cross and Blue Shield of Kansas City, and its behavioral health provider, New Directions Behavioral Health – had urged the family to get the malnourished young woman into an inpatient program for help with her anorexia and bulimia.

Piper seemed so near death that a therapist had told Wilcher that she feared each end-of-session goodbye would be their last.

But after just six days in what was supposed to be a stay of at least nine months, Wilcher said, the team that had recommended the treatment told her that insurance was no longer going to cover the $1,500 per day cost.

After the initial runaround, Wilcher was back on the phone the next morning trying to get the decision reversed. The insurer’s continued stonewalling left her infuriated.

So then, she said, “I just did a little Erin Brockovich thing, and I just made a sign, and two of my friends joined me.” The sign read, “My daughter is dying underneath Blue Cross and Blue Shield’s bottom line.”

She headed for Blue Cross’ headquarters near downtown Kansas City, Mo. On the second day of the picket, joined by supporters, Wilcher said some Blue Cross executives agreed to talk with her inside the building.

Wilcher got three months of treatment for her daughter. She said it was almost a daily battle with the insurance company to let her stay that long.

Piper relapsed almost immediately after she was discharged in January 2011. It would take another round of residential treatment before she got on the road to recovery that summer.

Eating disorder experts say Wilcher’s experience with Blue Cross and Piper’s resistance to treatment typify the struggles of many families caught up in the struggle with the disease.

One of the association’s top priorities is encouraging the insurance industry to cover more early intervention efforts, such as screenings, said Claire Mysko, NEDA’s program director.

As with other, diseases, she said, catching and treating an eating disorder early is more effective and less costly than addressing it after the condition has worsened.

Wilcher agrees, likening the current treatment protocol for eating disorders to sending an early-stage cancer patient away and telling them not to return until it has spread throughout the body.

Mysko said NEDA is also urging educators to be mindful of eating disorders as they combat childhood obesity.

“We are hearing a lot from parents about how this fear of (obesity) is actually stoking more anxiety about weight,” she said. “It can be very triggering for some kids.”

That eating disorders can prove intractable and require several rounds of therapy is something even representatives of the companies Sarah battled agreed with.

“I wish you could say there is some sort of automatic levers to pull,” said Steven Sehr, medical director for New Directions in Kansas City. “It takes a lot of work, and sometimes you have to do it two or three times before it sticks.”

Yet he and Dr. Gregg Laiben, medical director of Blue Cross and Blue Shield of Kansas City, insist that the companies keep patients in the highest level of care for as long as they need it before stepping them down to less intensive settings.

Sehr said New Directions does not wait for someone to fail before ratcheting up their care. Step therapy, he said, has been outmoded for at least five years.

In fact, he said, New Directions staff works with medical providers to establish certain triggers – such as excessive weight loss – that will intensify treatment before a patient becomes seriously ill.

Sehr said he understands how family members might misperceive efforts to get their loved ones well, but he said it serves no one to coddle them. That, he said, breeds dependence on others to help them eat and delays recovery.

And, Laiben said, pushing eating disorder sufferers into inpatient settings is out of step with a medical system that is performing more and more procedures on an outpatient basis. Moreover, he said, eating disorders are no different from any other disease in terms of treating different levels of severity.

Sarah Wilcher last month attended the Mothers & Others (MOM) march in Washington, D.C., which aimed to raise awareness about eating disorders and lobby members of Congress. These are some photos from the trip, where she was accompanied by her daughter, Piper, and Piper’s 14-month-old son. 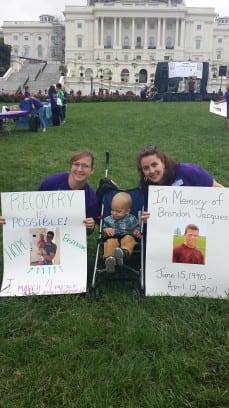 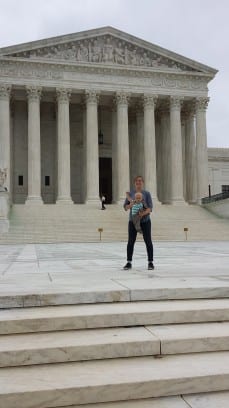 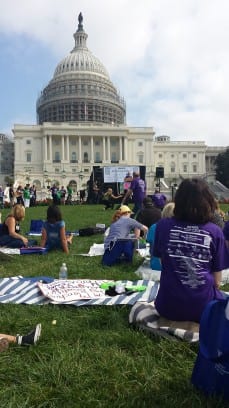