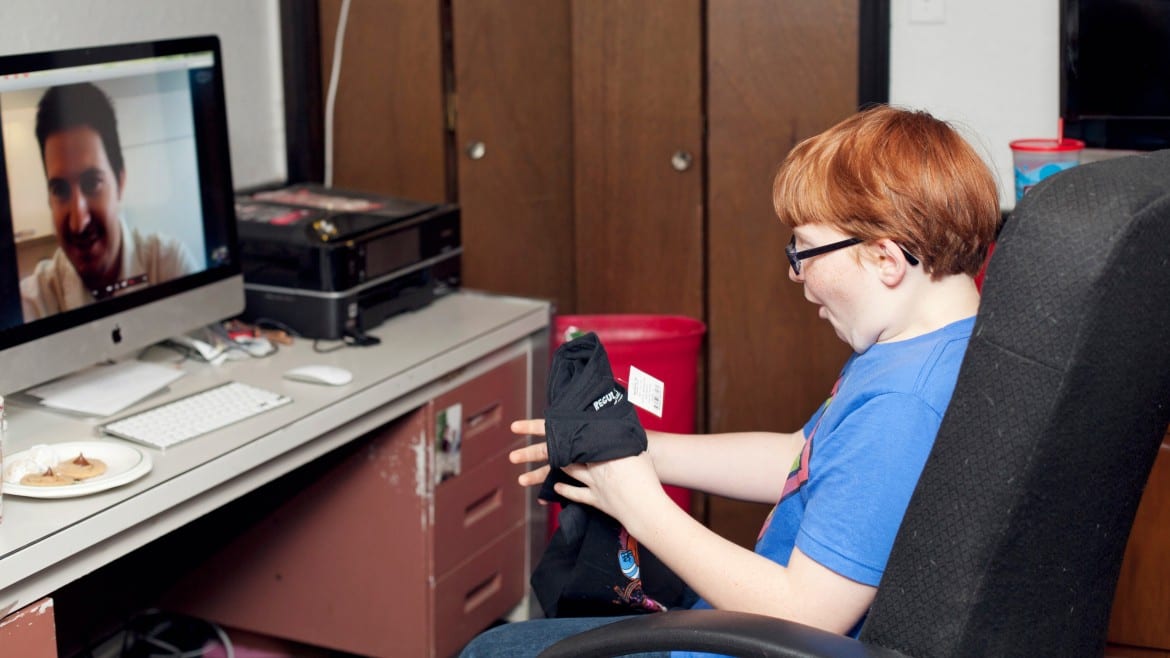 A Big and Little keep in touch over Skype even after a move separates them. (submitted photo)
Share this story

Big Brother Tom Cowherd and his Little Brother Aaron, now 18, have been matched for 10 years — paired in the youth mentorship program at Big Brothers Big Sisters of Greater Kansas City. They have spent the past decade playing football, fishing and going to movies.

Aaron’s mother, Kathy Wilmes, enrolled Aaron in the BBBS-KC program when he was eight. Since Aaron’s father had passed away, Wilmes felt Aaron needed a male mentor.

“(Tom) came to all of Aaron’s games, kind of coached him on the side… I think they developed a bond around that whole interest in sports,” Wilmes said. She said that she wasn’t sure where Aaron would be without Tom’s support and friendship.

Bigs and Littles (which is how Big Brother Big Sisters refers to its participants) in this program are required to see each other once a month, but Cowherd said, until his recent move to Colorado, he saw Aaron once a week. Since Cowherd and his wife moved to Denver eight months ago, he and Aaron have stayed in touch using a variety of digital tools, but none more than the video-chatting application Skype.

Technology has allowed Cowherd and Aaron the ability to stay in touch in a way that wouldn’t be possible with just letter writing, Cowherd said.

The friends participated in a Fantasy Football league together, using Skype to strategize. They won the whole thing over 11 other teams. Cowherd said this was “unbelievable” since he doesn’t know much about football. He credits their win to Aaron’s incredible knowledge of the game, which Aaron shared with Cowherd online.

The pair plan to play in a fantasy league again this year.

Cowherd and Aaron are just one of many Kansas City matches that use technology to interact. Typical Bigs and Littles who both live in KC bridge the gap between monthly or weekly visits by sending each other photos via Snapchat, mentioning each other on Instagram and video calling via FaceTime.

Tahir Atwater, a recruiter for BBBS-KC, said that this kind of interaction is very common, especially as the Littles enter middle school and gain access to tech like iPod touches and smart phones. He said video calls are popular.

“Instead of a quick phone call or text message, they like to have a little face-to-face interaction instantly,” he said.

BBBS-KC Chief Marketing Officer Kristi Hutchison said in an email that social media and digital interaction between Bigs and Littles is encouraged, but does not replace regular, in-person meetings. She said that technology is a great way to increase communication between outings, which will only serve to strengthen the relationship.

Lucia Harding, BBBS-KC senior case manager, and her Little, Aria, 12, use technology frequently: Harding said they started off texting between meetings and now use Snapchat often. She said they send silly faces or photos of what they’re doing.

“It fills the void in off-times when you do want to hang out, but she’s busy with her ballet or soccer or other activities,” she said. “It shows that she’s thinking of me or I’m thinking of her.”

“It fills the void in off-times when you do want to hang out, but she’s busy with her ballet or soccer or other activities. It shows that she’s thinking of me or I’m thinking of her.” — Lucia Harding, case manager BBBS-KC

Harding takes safety seriously when using social media: she never uses Aria’s last name, and she’s careful to only post photos that point to their location once they have left. She also was sure to get the permission of Aria’s mother before she began posting photos. These precautions aren’t just good sense, they’re also part of the BBBS-KC social media policy that Bigs, Littles and the Littles’ parents sign.

Hutchison and Atwater both told the same story of a BBBS-KC friendship that has been sustained even after the Big moved all the way to Argentina. Big Daniel and Little Simon frequently baked together while they both lived in KC, and this hobby became part of their Skype communication.

Atwater said the pair would bake together via Skype, and Hutchison shared that they Skyped, ate cookies and drank hot chocolate while Simon opened his Christmas presents from Daniel.

Staying connected is a crucial part of the Big Brothers Big Sisters program. Atwater said that even though it’s technically a “youth mentorship program,” they call it a friendship program.

“There’s something about a kid realizing that someone outside of the home is taking an interest in their lives when they don’t need to,” Atwater said.

He added that the aspirations of Littles change as their relationship with their Big deepens.

Harding has seen evidence of these changes through her work with the organization. Many of the Littles come from single parent homes, so having an additional adult in the Little’s life is especially advantageous, she said.

“For so many of our parents, they’re so stressed with other kids or just trying to make ends meet, that it’s good for the kid to have an outside person that’s just there for them,” she said.

Cowherd and Aaron at the BBBS-KC 2014 Match Appreciation Banquet May 4. Cowherd was recognized as a Kansas City Big Brother of the Year at the event. (submitted photo)

Cowherd was definitely the extra family member for Aaron; he even attended grandparents day at Aaron’s school.

Aaron said that Tom is his best friend and brother: “I never really had a best friend…. People are sometimes nice and sometimes mean, so I don’t have a true friend. (All) 10 years, I could rely on Tom to talk to him about anything and he would help me. He was just so nice and never put me down…. He was just really wise and always there for me,” Aaron said. “I really didn’t have a friend as a kid, like a friend/kid, so he was my friend/adult/brother.”

Cowherd’s dedication to Aaron was recently recognized on an organizational level.

BBBS-KC recognized Cowherd as a Kansas City Big Brother of the Year at the Annual Match Appreciation Banquet May 4. Cowherd and his wife visited KC for the banquet. Cowherd said he thinks he was chosen for the length of his relationship with Aaron as well as the way he dealt with what he calls “Aaron’s chemistry problems.” Cowherd uses this phrase to describe Aaron’s diagnoses with bipolar disorder and Asperger’s syndrome. He described these circumstances as complications, but not insurmountable obstacles.

“Sometimes it was challenging, but most of the time it wasn’t,” he said.

Aaron’s mother agrees that how Cowherd dealt with Aaron’s behavioral issues was a major factor in his recognition.

“I think it’s a testament to Tom’s dedication as a Big Brother,” she said. “It hasn’t mattered to him; he’s continued the relationship… he still stood beside him.”

Aaron and his mother will travel to Colorado this summer to visit Cowherd and his wife. In the meantime, they’ll continue to communicate using technology — bridging the gap between visits just as Bigs and Littles who both live in KC do.