The proposed South Loop Link, an ambitious plan to cover four blocks of the disruptive downtown freeway loop with a park, is taking a big step forward with Port KC assuming a lead role in implementing the project.

The public development agency has issued a request for qualifications (RFQ) to hire a firm to perform an environmental assessment for the estimated $160 million plan. The goal is for all or at least a segment of the park to be completed in time for the 2026 FIFA World Cup games in Kansas City.

Port KC is leading an effort that’s been spearheaded by the Downtown Council, a group of business and property owners, for more than a decade, and has been endorsed in recent years by city, state and federal officials.

Jon Stephens, Port KC executive director, said his agency was chosen to issue the RFQ and likely will continue having a big role because of its expertise in environmental remediation, redevelopment, collaboration with other agencies and public financing capacity.

“Port KC is excited about stepping into this role to utilize the expertise we have, not only to get this project over the finish line, but to make certain we’re able to accelerate the development timeline to get it finished as quickly as possible for the benefit of the community,” he said.

The South Loop, also known as Interstate 670, was built in the 1960s during an era when creating freeways to speed traffic in and out of downtown was considered progress. Now, however, the highway trench is seen as a barrier between downtown’s central business district and the Crossroads.

Local leaders are looking to Klyde Warren Park in Dallas as is an example of a successful freeway decking project. The park, which opened in 2012, covers a three-block stretch of a freeway between the city’s Uptown neighborhood and downtown.

“Reimagining the I-670 corridor as an urban park is one of the most important projects included in the Imagine Downtown KC 2030 Strategic Plan,” Bill Dietrich, president and CEO of the Downtown Council, said in a statement.

“It could reposition Downtown KC economically for the next 50 years. …The Downtown Council looks forward to a future where the South Loop Link Park is a public space for the entire community to gather.”

The proposed park deck would cover the South Loop for four blocks from Wyandotte Street on the west to Grand Boulevard on the east. And in a potentially controversial idea, it would block Walnut Street. Access through the park on Main Street and Baltimore Avenue would continue.

“This park will have a transformational impact on downtown and this city,” City Manager Brian Platt said in a statement.

“It will reduce the harmful environmental impacts of the highway, it will create much-needed green space downtown, it will unlock development potential south of 670, and it will create a new destination attraction for the entire region.”

Stephens said the plan ultimately calls for the park itself to be owned and maintained publicly, and its operation and programming handled by a nonprofit group, similar to the one used in Dallas.

The RFQ being issued by Port KC also roughly outlines a general map of how the project would be financed, calling for equal, one-third participation by local, state and federal sources.

At a press conference last April at the new Loews Convention Hotel, city officials said the hotel owners had pledged $5 million to begin engineering work. Other private sources expected to contribute include the Cordish Cos. and the Merriman family.

U.S. Sen. Roy Blunt and Rep. Emanuel Cleaver also said at the press conference they were confident federal money will be forthcoming, including the $25 million RAISE grant.

Stephens declined to say how much money had been lined up so far for the proposal, but was confident it was enough to begin the planning process.

“We’re confident enough investment is in hand and the planning phase can move forward,” he said.

The owners of Loews as well as Cordish and the Merrimans have a strong interest in seeing the noisy South Loop freeway capped.

The Loews Hotel is adjacent to the highway trench as are Cordish’s Two Light and Three Light apartment towers. The Merriman interests own the new 1400KC office building overlooking I-670 at 14th and Baltimore.

There’s also a proposal for a 500-unit apartment development by the South Loop at 15th and Main being pursued by an entity that includes Cordish and J.E. Dunn.

The RFQ being issued by Port KC expects replies by Oct. 3 and will then be considered by a panel with a final decision by the end of October.

In addition to an environmental assessment, the RFQ expects the successful applicant to prepare a conceptual plan that includes phasing of construction, a set of 30% design plans, and identifying any right-of-way and properties that need to be acquired.

Stephens said the decision to have Port KC issue the RFQ could shave 10 months or more off the project timetable.

“The process allows for much faster coordination on design needs by the Missouri Department of Transportation and the Federal Highway Administration and could reduce total time to completion by months,” he said in a statement.

He added in a separate interview, “I’m optimistic and hopeful we have the project or phases of the project open in 2026.”

As to whether Port KC may be the lead agency in issuing potential bonds for the South Loop plan and possibly being the public entity owning and maintaining the park, Stephens said that’s not been decided.

“Port KC has expertise in owning and operating large public spaces,” he said, referring to Berkley Riverfront Park and the Riverfront Trail.

“We have the expertise and staff to assemble these complex public projects and we have the relationships that go way beyond being an incentive agency,” he said.

Mayor ‘Bullish’ About Federal Grant for South Loop Link Proposal Kansas City Mayor Quinton Lucas is “bullish” that federal funding to help start building a long-sought deck and park covering the South Loop freeway may be announced before the end of the year. 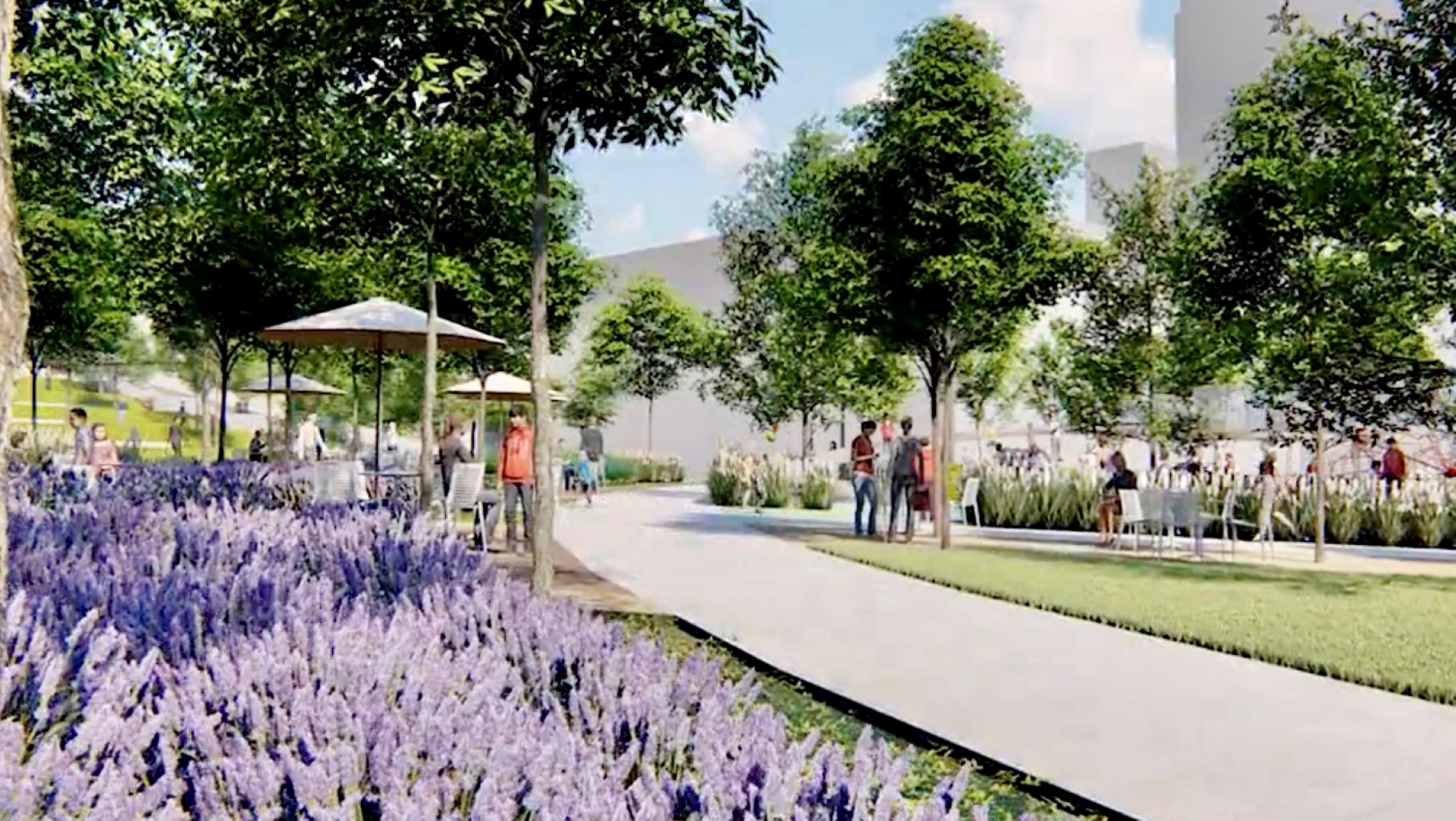 ‘South Loop Link’ Planning Continues as Baltimore Bridge is Replaced An ambitious proposal to cover up to four blocks of the South Loop freeway in Kansas City with a downtown park is continuing.