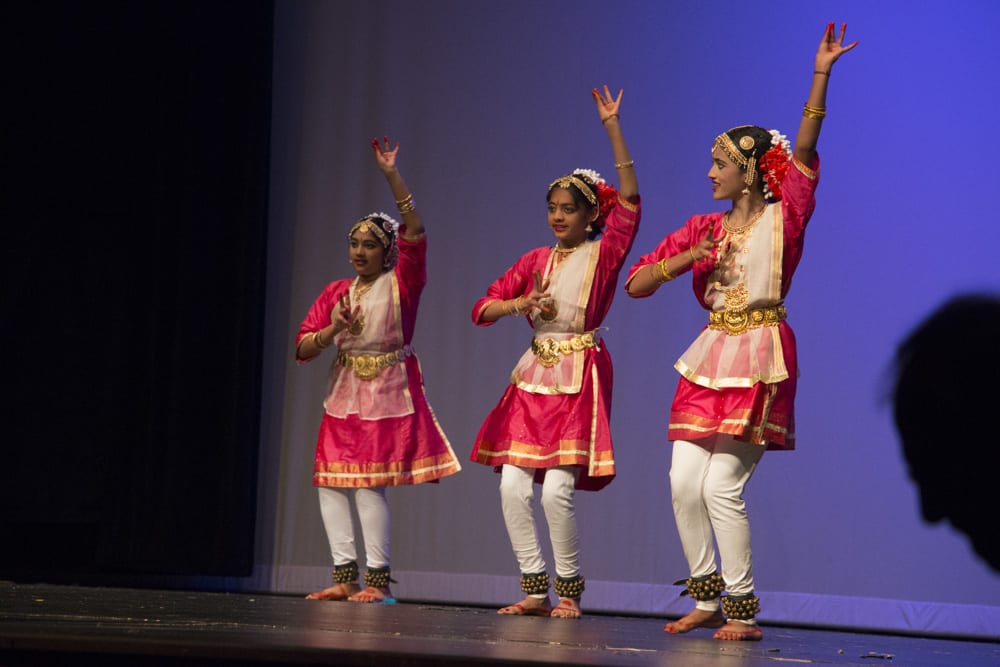 Sebhnem Heller, who is originally from Turkey, came to the Asian Cultural Festival in Olathe all the way from Omaha.

“I got this rare opportunity to know other countries’ culture,” said Heller, who brought her parents with her. “I came here last year and enjoyed the ambiance of the diversity of people and culture here.”

People from 20 countries participated in this year’s festival, held April 29 at Olathe East High School. This is the fourth year for the event, which is put on by the Mid-America Asian Culture Association.

With the growing diversity of Asians living in the Midwest, association founder Carol Wei said the festival is designed to expose regional residents to more cultures. Organizers estimated this year’s event again drew thousands of visitors.

Main attractions included dance performances, martial arts demonstrations, and more than a dozen food stalls with cuisine from Iraq to India, Bangladesh to Nepal, among others.

See Images From The Festival

Sebhnem Heller, who is originally from Turkey, drove down to the cultural festival from Omaha with her parents. (Photos by Binita Dahal | Flatland)

This group performed the Three Trails drum number from Japan.

Nepalese teens wear traditional clothes as they demonstrate a native dance for the audience.

Chinese women use delicate parasols as part of their dance.

A baby reaches for the "Sheerbandi," a traditional piece of jewelry, worn by a Nepalese woman.

Nepalese dancers pose for a selfie before they go on stage.

A couple attendees posed for a photograph with a participant in the cultural festival.

Indian women did not miss a chance to capture images of themselves in traditional attire. The children in front performed a Hindi dance later.

A young participant receives a Mehendi, a design typically applied in Asian countries prior to wedding ceremonies and other festivals. The design is made with a paste derived from powdered, dried leaves of the henna plant.

Iraqi representatives take a break from serving their traditional fare to attendees.

Many attendees also received a Mehendi. This is artwork applied to hands and feet with a paste made of a shrub that grows throughout Asia. Mehendi are typically applied to women before wedding ceremonies.

The event kicked off with a Japanese trail drum performance, which was followed by a Vietnamese Lion Dance.

Clay County Presiding Commissioner Jerry Nolte is a board member of the association, which was established four years ago.

“This kind of event is an eye opener,” he said. “These kinds of events are exactly what needs to happen to make the connection of Asian people more strong.”

During the event, Ian Grillot was honored with the American Hero Award.

Grillot was wounded in the Feb. 22 incident at Austins Bar & Grill in Olathe, when he pursued a gunman who had shot two Indian men in the bar. One of the men, Srinivas Kuchibhotla, died from his wounds, and Grillot was shot in the hand and upper chest.

Adam W. Purinton has been charged with the shootings.

“This year, Feb. 22 represented both the worst and best in our community,” Yoder said. “Regular folks like Grillot see a problem and stand up and do something about it.”

“Wow,” Grillot responded. “Thank you from the bottom of my heart for this honor.”

—Binita Dahal is a 2017 fellow through the Alfred Friendly Press Partners program, which provides hands-on training in U.S. and international newsrooms and within the Missouri School of Journalism. She is a journalist with the BBC Nepali Service.