‘Boxing kept me off the street.’ 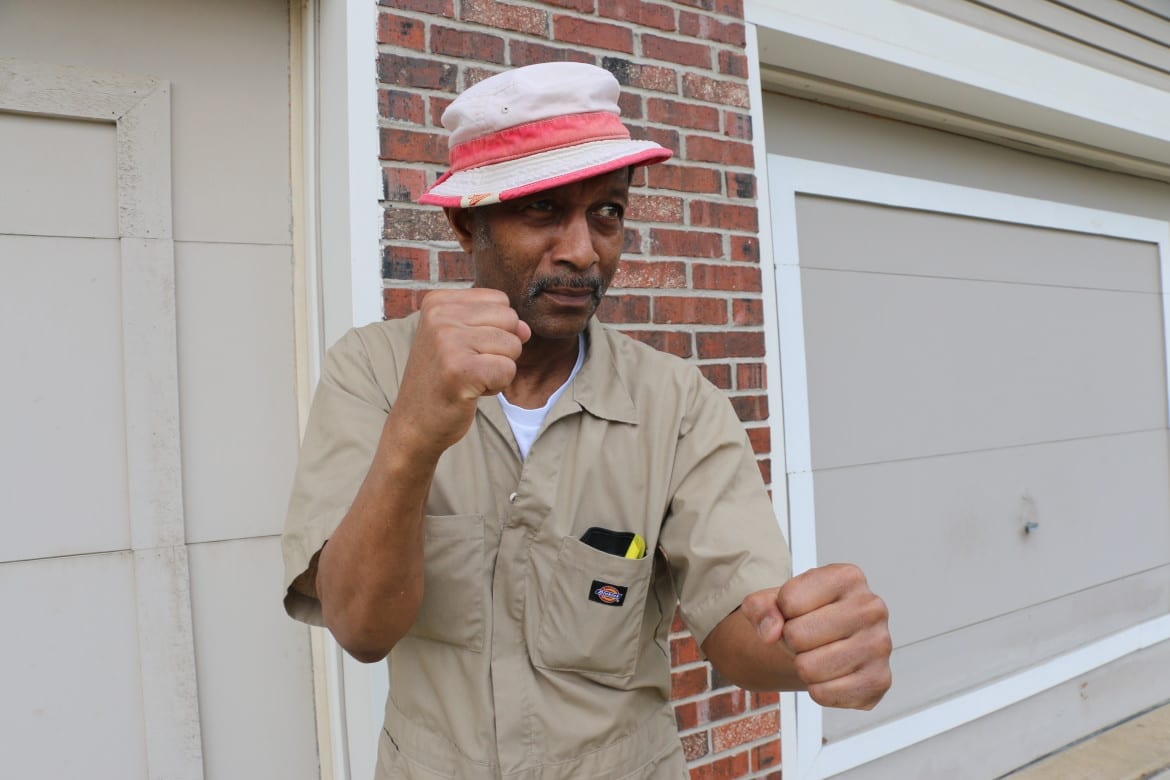 Carl Carter, who spent time as an amateur boxer, is a recognizable figure and storyteller where he works, at Johnson County Community College. He's pictured here at home in Overland Park, on April 15, 2016. (Photo: Daniel Boothe | Flatland)
Share this story

Beneath the bulky uniform of the custodial staff of Johnson County Community College is an aging physique, but one chiseled in the gym and boxing ring on Chicago’s South Side. Masking the heart of a fighter is the charming smile and infectious enthusiasm of a man whose job is to toil in the wake of others, whose lot in life is to build up the people around him.

Carl Carter was born in 1950 and came of age during the American Civil Rights movement, inspired by the passionate speeches of Dr. Martin Luther King Jr., Malcolm X, and the ultimate showman, Cassius Clay.

“I heard of Cassius Clay, but thought he was a white man,” says Carter. “When I saw he was a black man and heard him saying, ‘I am the greatest! I shook up the world! I am beautiful!’ I had never heard anyone talk like that. I was inspired and wanted to be like that.” 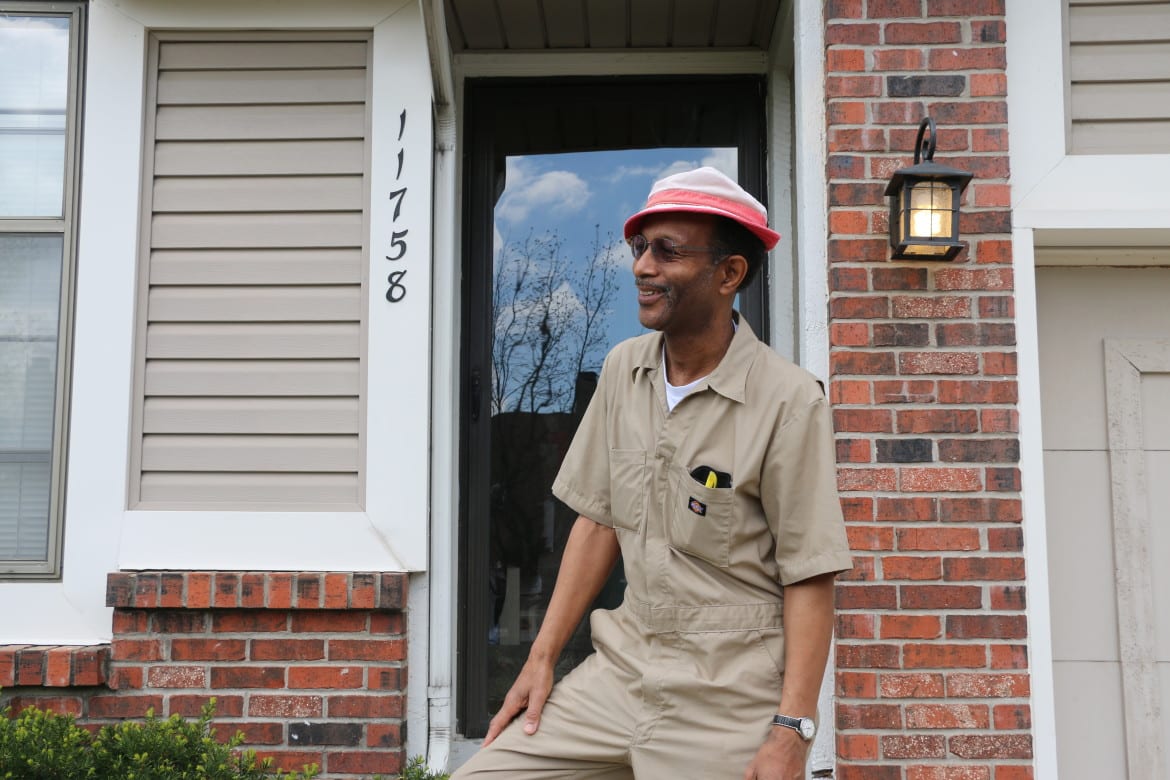 Entering the gym for the first time, the young Carter started a ritual of exercise that has lasted a lifetime. Boxing brought Carl “Pretty Boy” Carter amateur glory in his five-year career, but more importantly, it gave him somewhere to channel the aggression of a teenager while the tides of racial tension roiled.

“Boxing kept me off the street, out of trouble,” says Carter. “My mother warned me that if I fought in the street and hurt somebody, I’d be in real trouble because of these [rock-hard boxer’s knuckles].”

Affecting the stutter and facial tick of fighters who have suffered too many knockouts, Carter recounts his days in the gym when older boxers would bait him into fighting.

“They’d say ‘c-c-come on, P-p-pretty boy! I won’t h-h-hurt you.’ Then I’d get in the ring and act like I was going to throw punches with ’em,” Carter says. “I’d dodge back and get out of the way. I didn’t like to get hit. I wanted to stay beautiful. They’d say to me, ‘Pretty Boy, you ain’t never gonna win if you can’t get hit!’”

“I saw those men at the gym with their slack faces and trouble talking and I just thought … ‘That ain’t winning,’” says Carter. “That’s not being successful.”

Carter left Chicago to attend Kansas City Kansas Community College, then Emporia State University. Making his mother proud provided plenty of motivation to succeed, but there was other inspiration that was more directly responsible.

“I heard of Cassius Clay, but thought he was a white man. When I saw he was a black man and heard him saying, ‘I am the greatest! I shook up the world! I am beautiful!’ … I was inspired and wanted to be like that.” — Carl Carter

“When I came to KCK and Emporia State, I didn’t know how few black folks there’d be,” Carter says. “I’d leave class and see these [two girls] and they’d always go to the library. Since I didn’t see too many sisters around I just followed them in there and spent my time studying.”

Carter still beams with pride at the accomplishment of being the first in his family to graduate from college, but a new fight was beginning. Chances to use his newly-minted psychology degree were sparse and he had to work custodial and customer service jobs to make ends meet. As in the ring, this fight wasn’t one Carter would take lightly.

“Boxing gets into your blood,” says Sumya Anani, a four-time world champion female boxer and friend of Carter. “It’s about seeking your human potential, seeing what you’re made of. Carl takes the idea of embodying his potential into everything he does.”

He seems to find joy in providing excellent service and interacting with people, from Walgreens as a kid in Chicago, to the Ritz Charles in Overland Park as a housekeeping supervisor, to the Wolf Creek Nuclear Power Station in Burlington, Kansas where he was a document porter. His presence at JCCC is an extension of that work ethic.

“Carl just has a great attitude,” says Gary Cook, director of housekeeping for the college. “He’s reliable and does a great job. Everyone enjoys talking with him. He’s also very encouraging to his co-workers.”

As custodian of the gym facilities, Carter’s work is as legendary as his workout.

“I do at least 150 sit-ups every day,” Carter said. “Then I do another 30 minutes, sometimes more of jump rope. I’m always telling the kids in there to take care of their bodies and eat right.”

Watching Carter in action, it’s clear that he is an encouraging figure to the students and everyone around him. His humble attitude and ever-present smile hide the hard past of a fighter from Chicago. He still carries the physique of a younger man, but the attitude of one set on making the world a better place.

“People need encouragement,” says Carter. “People encouraged me, so I’ll always try to provide that whenever I can. That’s my dream and I’m living it.”

Check out more stories about the American dream at KCPT’s Re:Dream project.