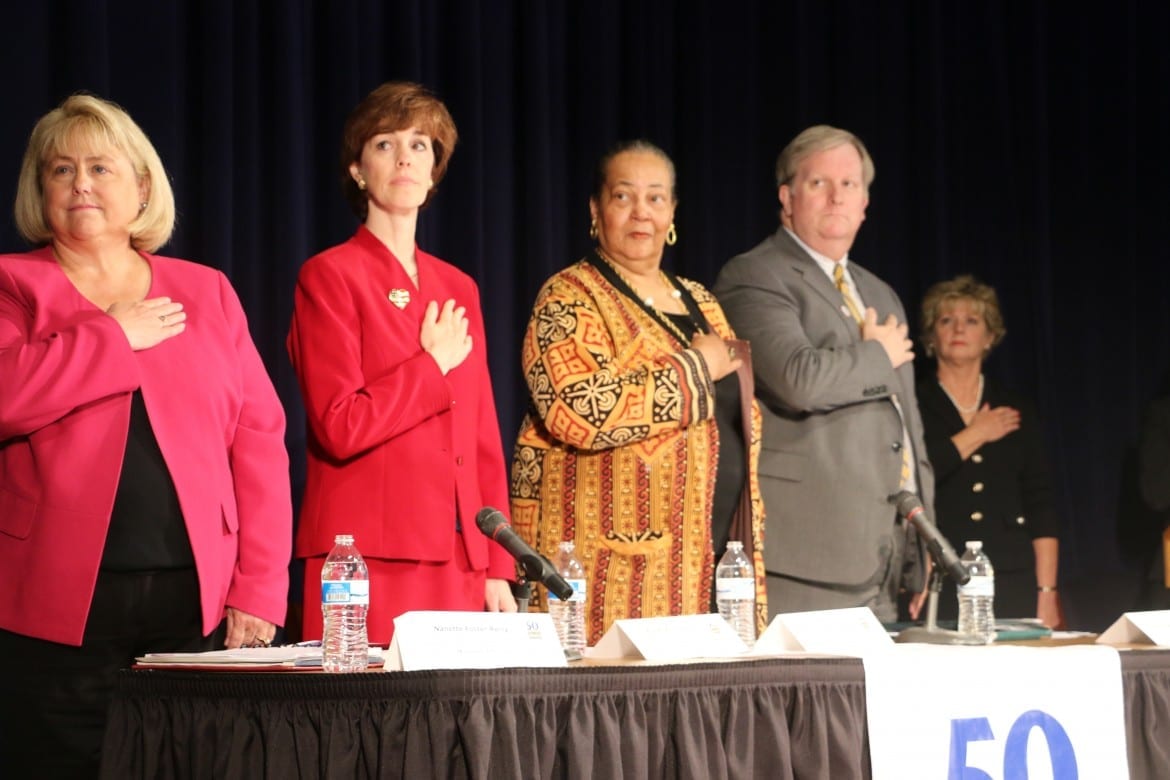 Speakers at ceremonies marking the 50th anniversary of the Medicare and Medicaid programs gazed at the American flag during the singing of the National Anthem. The ceremony took place Thursday at the Truman library in Independence, Missouri. (Photo by Mike Sherry/Hale Center for Journalism)
Share this story

Advocates of government-sponsored health care gathered Thursday at the Harry S. Truman Library and Museum in Independence, Missouri, to mark the anniversary of legislation that’s both a local story and a milestone for medical care in the United States.

Fifty years ago, on the same stage where speakers sat, President Lyndon Johnson signed the law establishing Medicare and Medicaid, vastly expanding insurance protections for the elderly and for low-income Americans.

Medicare and Medicaid stand as “shining examples” of the very reason his grandfather entered politics, said Clifton Truman Daniel, a grandson of President Truman. “He wanted to make things better for people.”

Johnson chose the Truman Library for the signing ceremony as a tribute to Truman, who had championed national health insurance, urging Congress to adopt his vision. His pleas went unanswered.

Today, Medicare covers the elderly and disabled while Medicaid assists the poor, including children and pregnant women. The two programs combined cover about 125 million people, or nearly one out of every three Americans.

Johnson issued the first two Medicare cards to Truman and his wife, Bess.

At the signing ceremony, Johnson expressed pride that Medicare and Medicaid were enacted during his administration, but said: “It was really Harry Truman of Missouri who planted the seeds of compassion and duty which today flowered into care for the sick, and serenity for the fearful.”

Addressing Truman, Johnson said, “And just think, Mr. President, because of this document – and the long years of struggle which so many have put into creating it – in this town, and a thousand other towns like it, there are men and women in pain who will now find ease.”

“Simply put,” said Nanette Foster Reilly, regional administrator of the agency that oversees the programs, “Medicare and Medicaid save lives.”

Medical histories often trace the concept of government-provided health care to Germany in the late 19th century. By the start of the 20th century, the U.S. lagged behind many of its peer countries in providing medical care for its citizens.

But the idea of a national health insurance program failed to take hold even during the vast expansion of social programs enacted as part of President Franklin D. Roosevelt’s New Deal legislation.

Johnson and others credited Truman with laying the groundwork for Medicare and Medicaid in the mid-1940s. Truman, they said, was the first president to stick out his neck, take on the fierce opposition of the organized medical community, including the American Medical Association, and put the full force of his office behind the idea of national health insurance.

“Many men can make proposals. Many men can draft many laws,” Johnson said. “But few have the piercing and humane eye which can see beyond the words to the people that they touch … And fewer still have the courage to stake reputation, and position, and the effort of a lifetime upon such a cause when there are so few that share it.”

In his own remarks at the signing ceremony, Truman suggested that his push for a government health insurance program had a significant national security angle.

He said that Medicare was an important benefit for “those of our citizens who have completed their tour of duty and have moved to the sidelines.”

Truman’s message to Congress on Nov. 19, 1945, considered to be his first call for national health insurance, noted the alarming frequency with which people were being declared medically unfit to serve in the military.

As of April of that year, nearly a third of all draftees between the ages of 18 and 37 had failed their physicals, he noted.

“These men and women who were rejected for military service are not necessarily incapable of civilian work,” Truman said in his congressional message. “It is plain, however, that they have illnesses and defects that handicap them, reduce their working capacity, or shorten their lives.”

Three years later, in remarks to the National Health Assembly, a body convened to outline a 10-year health strategy for the nation, Truman said he first recognized the link between population health and national defense during his service in World War I.

Truman organized a field artillery regiment in 1917 and was shocked by how many men were too medically fragile to serve.

“That was a National Guard volunteer regiment,” he said, “and when a man got turned down because he was physically unfit, that was not only tragic to him, but it was tragic to us who wanted him to serve with us.”

(Echoes of those comments were heard again just this month, when a group of retired generals and admirals concluded that nearly one of every three Americans age 17 to 24 is too obese to qualify for military service.)

As speakers on Thursday noted, Truman’s rationale for enacting a national health insurance program sounded remarkably similar to the arguments advanced by proponents of the Affordable Care Act, also known as Obamacare.

Truman argued that a healthier populace would translate into a more productive workforce and encouraged people to get preventive care rather than wait until their condition worsened before seeking medical assistance.

In a special message to Congress in 1949, reminding lawmakers of the plan he had put forth four years earlier, Truman said the real cost of inadequate medical care was not measured merely in hospital and doctor bills.

“The real cost to society,” he wrote, “is unnecessary human suffering and the yearly loss of hundreds of millions of productive working days.”

Truman promoted his vision through the waning days of his presidency.

A Brief History of Medicare

On Jan. 9, 1953, less than two weeks before the inauguration of his successor, Dwight D. Eisenhower, Truman transmitted to Congress the first volume of a report by the President’s Commission on the Health Needs of the Nation, a panel he had established.

But as early as 1950, one of his key health aides, Oscar R. Ewing, said he had become convinced that the nation was not ready for the type of broad national program envisioned by Truman.

Ewing recounted his thoughts in a 1969 oral history on file at the Truman Library.

He said that, partly because of a cocktail party conversation he had with newspaper publisher William Randolph Hearst Jr., he had begun to think about taking a smaller bite of the apple by proposing to cover a smaller segment of the population.

The interviewer asked Ewing how Truman reacted to the idea of a plan solely for seniors.

“Well, at first he didn’t like the idea because he didn’t like to give up,” Ewing said. “I think the president rather thought it would be better to lose everything at that time and that future events would later force the adoption of some form of national health insurance. But he finally said, as I recall, that he’d follow my recommendations if I really thought it was the wise thing to do.”

Click here learn more about the future of Medicare.