A Quick, Clickable Roundup Of Health News From Our Region - And Beyond - For The First Week of June 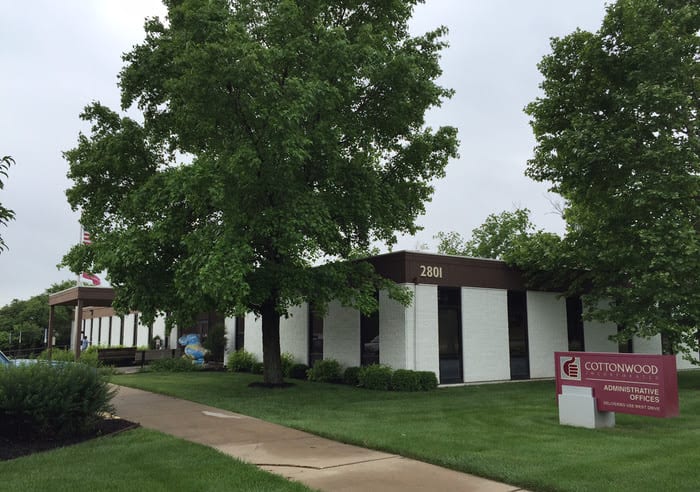 Organizations that provide support services to Kansans with disabilities, such as Cottonwood Inc. in Lawrence, are anxious to see how the state will implement payment changes that are part of budget cuts Gov. Sam Brownback announced last week. (Photo: KHI News Service)
Share this story

Organizations that provide support services to Kansans with disabilities are anxious to see how the state will implement payment changes they fear will hamstring their operations.

The changes are part of cuts Gov. Sam Brownback announced last week after the Legislature approved a budget that didn’t balance.

Brownback’s administration projected about $2.6 million in savings from Medicaid reimbursement changes that affect providers of home and community-based services, or HCBS, which are intended to allow people with disabilities an alternative to institutional settings.

Cliff Sperry, vice president for CLASS Ltd., an organization in southeast Kansas for people with developmental disabilities, said he needs more information about how state is going to achieve those savings.

“Until they tell us what they’re really talking about, we don’t really know how to even figure an impact,” Sperry said.

The money in question comes from changes to how the Kansas Department for Aging and Disability Services enforces two policies: one governing “capable person” reimbursements and the other residential pay.

— Andy Marso is a reporter with KHI News Service, an editorially independent initiative of the Kansas Health Institute, and a partner in Heartland Health Monitor, a reporting collaboration that also includes KCPT and KCUR.

The recently announced cuts would reduce state expenditures for KanCare, the state’s privatized Medicaid program, by $56.3 million and trigger a loss of approximately $72.3 million in federal funds. Combined, the managed care organizations that administer $3 billion KanCare program and the health care and service providers they have contracts with would be forced to absorb more than $128 million in cuts.

Of particular concern to providers is the proposed 4 percent reduction in reimbursement rates, which would amount to about $87 million of the $128 million total.

“In addition to being bad policy, the administration’s proposal to cut provider reimbursement would be inconsistent with state and federal law,” Tom Bell, chief executive of the Kansas Hospital Association, said in a recent letter to Brownback. “It would also be inconsistent with and not permitted by provider contracts in place with all Kansas hospitals. As such, we will challenge these proposed cuts in any appropriate way.

Michael Randol, director of the Division of Health Care Finance in the Kansas Department of Health and Environment, said regardless of when CMS approves the cuts, they will be retroactive to July 1. If there is significant lag time between the effective date of the cuts and when CMS approves them, it could increase their impact by requiring providers to absorb a year’s worth of cuts in a matter of months.

State officials on Thursday wrapped up a series of public forums on the pending renewal of KanCare, the state’s privatized Medicaid program.

A forum in Hays, Kansas, on Thursday was the last in a series of meetings intended to get input on the renewal of KanCare, the state’s privatized Medicaid program. (Photo: Bryan Thompson | Heartland Health Monitor)

Federal approval for the five-year demonstration project expires at the end of 2017, and the Kansas Department of Health and Environment plans to apply for reauthorization by the end of this year.

Forum organizers were looking for ideas about coordination of care, value-based payment systems and waiver integration.

But it appeared that many of those at Thursday’s forum in Hays instead wanted to discuss better communication regarding Medicaid clients, especially with care coordinators.

— Bryan Thompson is a reporter with KHI News Service

In its first detailed disclosure on executive pay, nonprofit Blue Shield of California said Chief Executive Paul Markovich made $3.5 million last year – a 40 percent increase since he took the top job in 2013.

The San Francisco-based health insurer has faced criticism for years from consumer advocates about its lack of transparency on executive compensation, and the issue attracted even more scrutiny after a state audit raised questions about the insurer’s big pay increases and large financial reserves.

Following that audit, in 2014, California revoked Blue Shield’s state tax exemption, which it had held since its founding in 1939.

In the report issued Thursday, Blue Shield for the first time listed the compensation for its 10-highest paid executives by name. The company also offered details, such as base salary and incentive awards.

“While we have been providing reports as required to regulators, it left something to the imagination,” said company spokesman Steve Shivinsky. The company wanted to “lift the veil and make sure we are going above and beyond what is required so there is a higher level of transparency.”

— Chad Terhune is a reporter with Kaiser Health News, a national health policy news service that is part of the nonpartisan Henry J. Kaiser Family Foundation.

Published on May 26, 2016
A 49-year-old Pennsylvania woman has been found carrying a strain of E. coli that is resistant to last-resort antibiotics, which researchers say marks the first appearance of a drug-proof bacteria on U.S. soil. Scientists in Pennsylvania are working with the Centers for Disease Control to find a way to fight the superbug. Hari Sreenivasan talks to Dr. Beth Bell of the CDC for more.