A Quick, Clickable Roundup Of Health News From Our Region For The Second Week of March 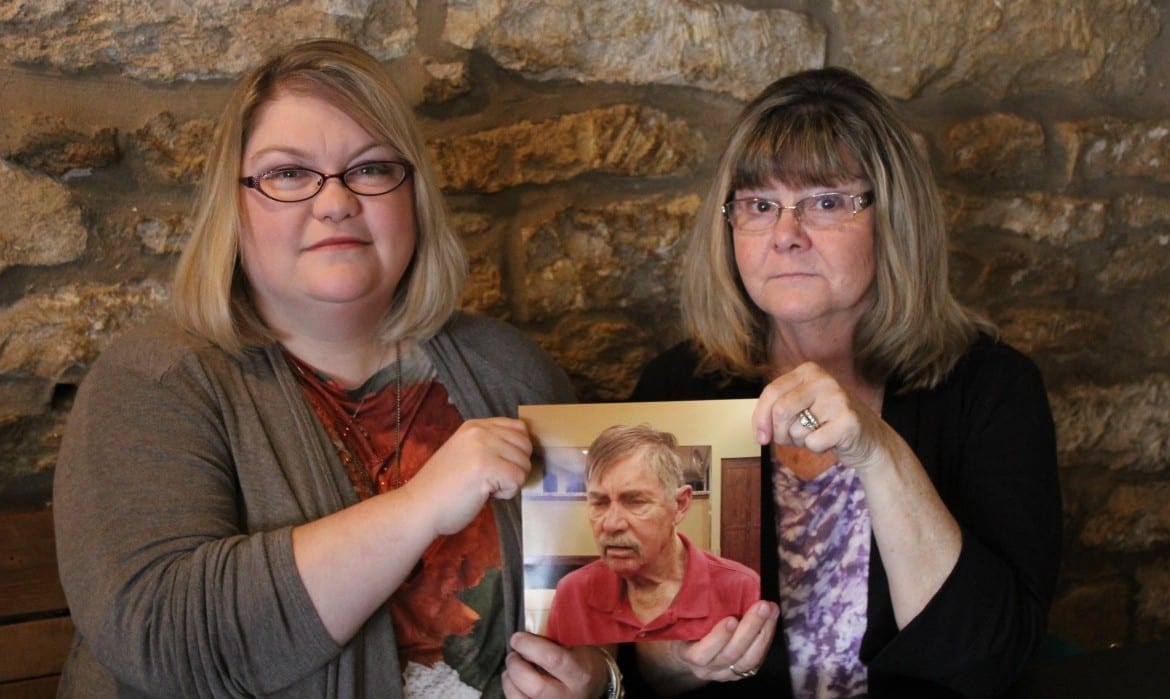 Allen Wagner's family says it took months for his Medicaid application to be approved. His daughter, Amy Flanigan, left, and wife, Charlene Wagner, recalled their frustration as he was moved from hospital to hospital. (Photo : Andy Marso |Heartland Health Monitor)
Share this story

Judy Kregar is not a member of the Rotary Club in nearby Greensburg, but she decided to go when she heard Gov. Sam Brownback would be at the club’s recent meeting.

Kregar, the administrator of a small nursing home in nearby Bucklin, wanted to tell Brownback in person about the struggles some of her residents are having getting their Medicaid applications and annual renewals processed.

“It is such a huge pressing issue for, as I understand it, all the nursing facilities in Kansas,” Kregar said in a phone interview last week. “Anyone who has Medicaid residents, we are all frustrated.”

— Andy Marso is a reporter for the KHI News Service, an editorially independent initiative of the Kansas Health Institute and a partner in the Heartland Health Monitor reporting collaboration. The collaboration also includes KCUR and KCPT.

The case is hugely consequential for abortion providers in Kansas and Missouri because both states have similarly restrictive laws.

Jackie Casteel, an abortion-patient advocate, and Bonyen Lee-Gilmore, a spokesperson for Planned Parenthood of Kansas and Mid-Missouri, traveled to Washington, D.C., as part of a contingent of abortion rights activists that gathered in front of the Supreme Court today. A group of anti-abortion demonstrators was there too.

“If these laws are upheld we will see abortion providers vanish,” Lee-Gilmore told KCUR in a telephone interview. “If they are stricken then I think that we will definitely see doors start to re-open and we will be able to better argue in our state courts the undue burden that it puts on women and the unconstitutional standards that it sets in our state.”

Editor’s note: This is the first of two stories examining the costs of early scheduled births in Kansas and efforts to reduce them.

The practice of delivering babies a few days early for the convenience of mothers and doctors has been a common one for years at hospitals across the country and in Kansas.

But when research established that deliveries done even a little ahead of schedule can threaten the health of newborns, Kansas health care providers decided it was time to end the practice.

Fifty-two Kansas hospitals are participating in a quality improvement network to reduce early elective births to fewer than 2 percent of all deliveries. (Photo: Creative Commons-Pixabay)

A quality improvement initiative launched in mid-2012 hasn’t accomplished that goal but it has reduced the rate of “early elective births” at participating Kansas hospitals by 70 percent, according to officials at the Kansas Healthcare Collaborative, which spearheaded the effort with the Kansas Hospital Association and March of Dimes.

“We want to change the culture in this state toward one of constant improvement, and one of safety, more importantly,” says Kendra Tinsley, executive director of the Kansas Healthcare Collaborative, a nonprofit formed in 2008 by the hospital association and the Kansas Medical Society.

— Megan Hart is a reporter with the KHI News Service

Seeking Answers, Finding Hope: A Mother’s Quest To Free Her Son From Seizures

JJ Krentz turned away from his iPad and looked up as a blond woman walked into his classroom at Parsons State Hospital and Training Center.

With help from his teacher, he stood from his chair and greeted his mother, Tiffanie Krentz.

He knew she was coming and so he parroted the two-word phrase he’d been hearing all day from others when he asked them about “mama.”

Since her son JJ was admitted to Parsons State Hospital and Training Center in June 2014, Tiffanie Krentz has worn out her car tires during the round trip from her Topeka home. (Photo: Andy Marso | Heartland Health Monitor)

Tiffanie took each of his hands in hers and leaned down so their faces were almost touching.

JJ was admitted in June 2014 to a state facility serving Kansans with intellectual disabilities.

Since then Tiffanie has worn out her car tires driving the two-lane highways between Parsons and her home in Topeka. She also works, raises JJ’s younger brother, Jude, and has become an advocate for legalization of an oil derived from marijuana that people in other states are using to treat their children’s seizures.

Tiffanie has seen online commenters accuse her of wanting to get her child “high.” That’s not her intent. The bill she has testified for in Kansas would legalize only oil made from marijuana that is 3 percent tetrahydrocannabinol or less — too little to produce a high.

The House passed the measure last year, but now it sits in the Senate Public Health and Welfare Committee in the form of Senate Bill 147.

Can Mutant Mosquitoes Be Used to Fight Zika and Dengue Fever?