A Quick, Clickable Roundup Of Health News From Our Region For The First Week of February 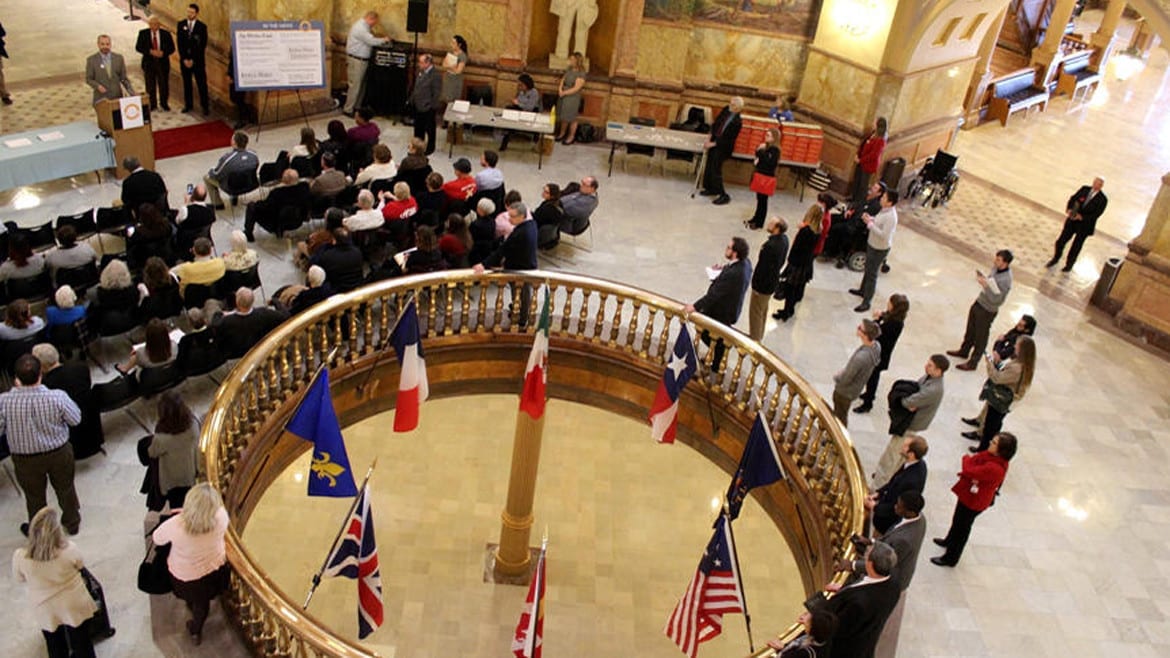 The Open Kansas initiative kicked off last week in the Statehouse rotunda. Nonprofit organizations that advocate for children, minorities and low-income Kansans launched the effort to counter what they see as a trend toward less open government. (Photo: Susie Fagan | Heartland Health Monitor)
Share this story

Several nonprofit organizations that advocate for children, minorities and low-income Kansans are concerned about what they see as a trend toward less open government in Kansas.

So, they’ve joined forces to launch what they’re calling the Open Kansas initiative and to ask legislators to sign a “transparency pledge” to taxpayers. The pledge commits those who sign it to support:

“It’s become more and more challenging for Kansans to access public information and to participate in our democracy,” said Benet Magnuson, executive director of Kansas Appleseed.

Asked for an example, Shannon Cotsoradis, president and chief executive of Kansas Action for Children, cited problems that her organization had getting timely information about the status of ongoing payments Kansas receives from the nation’s leading tobacco companies under a 1998 agreement that settled a multi-state lawsuit.

— Jim McLean is executive editor of the KHI News Service, an editorially independent initiative of the Kansas Health Institute and a partner in the Heartland Health Monitor reporting collaboration. The collaboration also includes KCUR and KCPT.

Thousands of Kansans seeking Medicaid benefits are being forced to wait months because of continuing problems with a new computer system and a change in the state agency responsible for handling some eligibility determinations.

The application backlog began to form in July when state officials moved Medicaid eligibility processing to the long-delayed Kansas Eligibility Enforcement System, or KEES. The software switch forced employees to use dozens of time-consuming workarounds to make the system function.

Organizations that serve those populations say that since then, their clients have been improperly dropped from Medicaid, which in Kansas is a privatized program called KanCare.

KDHE spokeswoman Sara Belfry said via email that the department has about 10,000 Medicaid applications pending, which is up from about 6,000 prior to taking on DCF’s eligibility responsibilities. Belfry said “a number of factors” contributed to the backlog, including the open enrollment period for insurance through the healthcare.gov marketplace, which refers some Kansans to Medicaid.

— Andy Marso is a reporter for the KHI News Service

The Kansas City hospital said that Tom Curran, previously with Children’s Hospital of Philadelphia, will become chief scientific officer and executive director of its Children’s Research Institute on Feb. 1.

The institute was established last year and focuses on four pediatric areas: genomic medicine, the development and reformulation of drugs, health services and outcomes, and health care delivery.

“Children’s Mercy — and all of Kansas City — is fortunate to have one of the top scientific researchers, educators and medical leaders joining us to accelerate Children’s Mercy’s efforts to bring translational research and precision medicine to all children in our region,” Dr. Michael Artman,  chairman of Children’s Mercy’s department of pediatrics, said in a statement.

Curran, who grew up in Scotland, did a postdoctoral fellowship at the Salk Institute in San Diego, was associate director of the Roche Institute of Molecular Biology in Nutley, New Jersey, and founded the department of developmental neurobiology at St. Jude’s Research Hospital in Memphis, Tennessee, according to the statement. He was deputy scientific director of Children’s Hospital of Philadelphia.

Around a quarter of adults in Wyandotte County, Kansas, smoke. That’s about twice the rate in Johnson County and well above the state average. Wyandotte County’s government recently created a coalition of partners to find ways to address the problem. For the latest in our series KC Checkup, we talked with Rebecca Garza, coordinator of Tobacco Free Wyandotte, who began by explaining the significance of  Kansas City, Kansas’ recent decision to raise the legal age for the sale of cigarettes and other tobacco products to 21.

— Alex Smith is a reporter with KCUR

Kansas health authorities said that, as of late last week, more than 390 people had reported getting ill after attending the New Theatre Restaurant in Overland Park.

The Kansas Department of Health and Environment said it was expanding its investigation of norovirus infection after receiving the reports.

The new number is about quadruple the number the agency reported on Wednesday, when it said more than 100 people who attended performances at the popular dinner theater restaurant had become ill. Four people were confirmed to have come down with the virus, which is highly contagious.