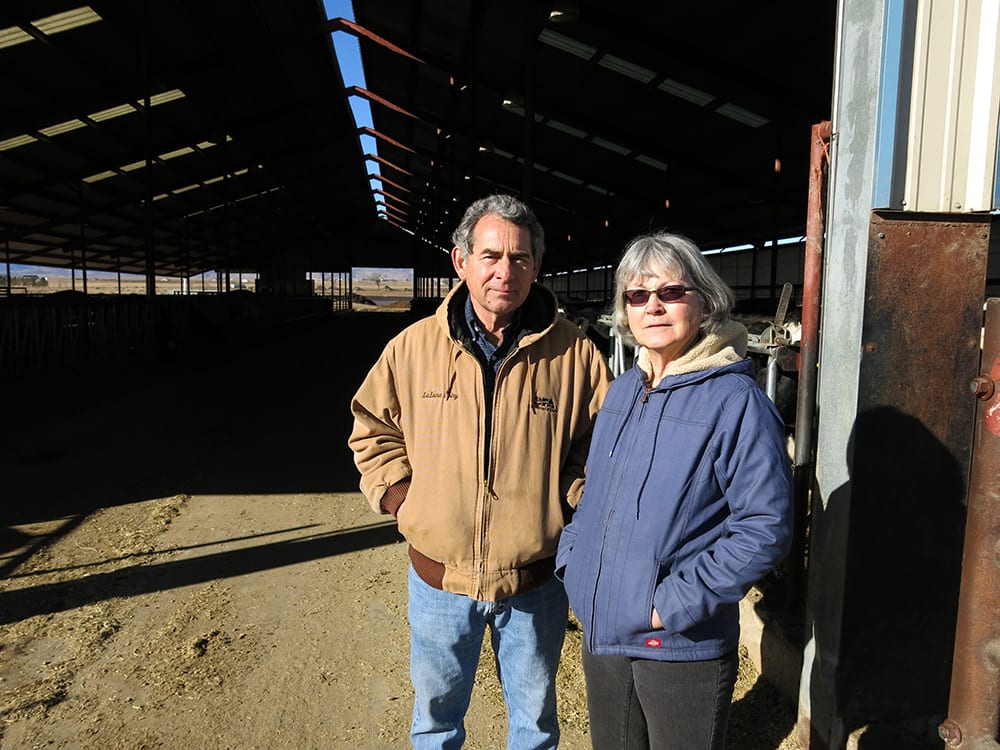 When Jon Slutsky’s dairy farm in Wellington, Colorado is fully staffed, it’s a moment to celebrate. A full roster of employees at Slutsky’s La Luna Dairy is rare these days.

“We’re doing really well with our employee base,” Slutsky said. “A year ago, we couldn’t say that. We were short.”

With the farm’s 1,500 cows waiting to be milked, Slutsky and his wife Susan Moore felt panicked, worried they didn’t have enough hands on deck to milk about 200 cows per hour.

“That’s what pays the bills for a place like this is milk sales,” Slutsky said. “We were short five milkers out of 11.”

The couple moved to Colorado’s Front Range from California to start the dairy decades ago, when Slutsky and Moore themselves milked the animals in an antique shed. But over the years, as the business has grown, La Luna’s workforce has become increasingly homogenous, made up of young Latino men, often from Mexico or Central America, who get their start on the farm attaching milking machines to udders.

America’s dairies rely on immigrant labor to milk cows and care for the herd. Many owners of the country’s largest dairies say that they’re unable to find employees. A comprehensive fix to the immigration system seems like a longshot in the new Congress, leaving some dairies struggling to keep up.

Finding workers to don coveralls, muck boots and endure the occasional splash of manure, or spritz of urine is not as simple as putting an ad in the newspaper. Unemployment in Colorado is hovering around 4 percent. An oil boom nearby has opened up well-paying jobs to laborers. Slutsky’s lost at least one manager to the oil fields. He’s tried hiring local folks, but they don’t last.

“We’ve had people come and try this job and just disappear after an hour — not like the smell or the work or it’s yucky,” Slutsky said. “It’s just not for everybody.” 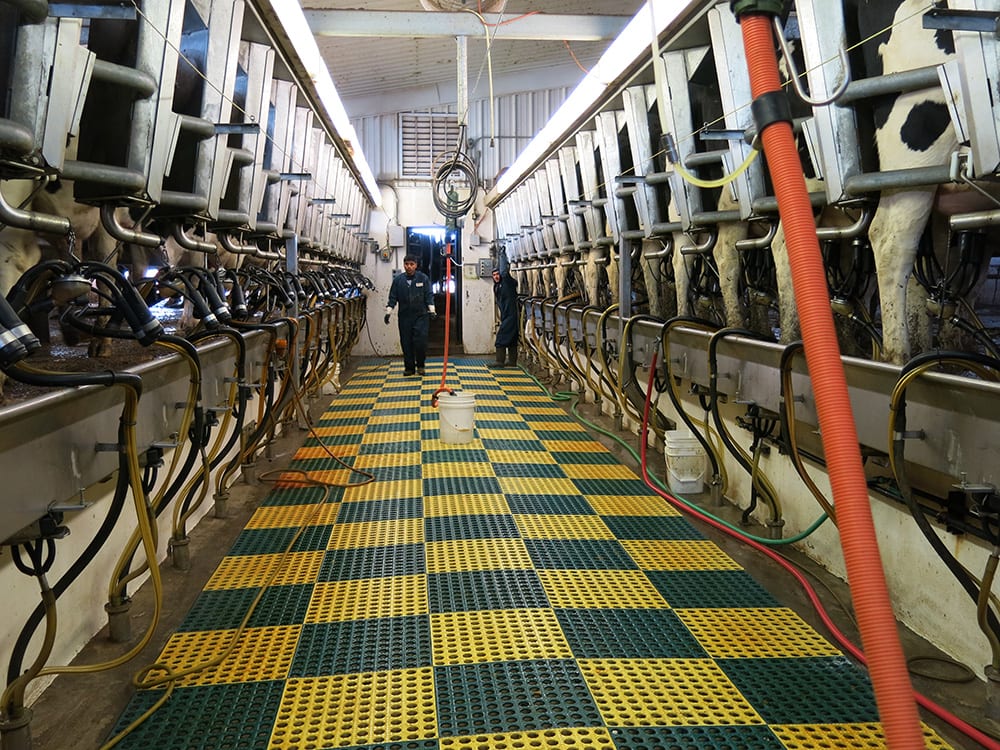 Noa Román-Muñiz, a dairy specialist with Colorado State University extension, says La Luna is not the exception, but very much the rule when it comes to labor issues. A 2008 survey of dairy farm training programs found 85 percent of Colorado’s dairy workers were Mexican-born, Spanish-speaking men. A combination of cultural and economic factors bring those men to this type of work, Román-Muñiz says.

“I’ve heard from pretty much any dairy producer I work with, Anglos [caucasian workers] don’t last on the operation,” she said. “Someone from Mexico or Guatemala they see this as a good opportunity to help their families. To feed their families. It’s that simple.”

A lack of workers means owners have to scramble to keep farm operations up and running. Because dairy farm work is specialized, it’s hard to find capable replacements who don’t need months of training, Román-Muñiz says.

“They’re doing the jobs that no one else wants,” Román-Muñiz said. “So, in my opinion, they’re not taking jobs from anyone.”

For undocumented workers, keeping a dairy job can be tough. Dairies have been the subject of immigration raids and federal audits. A 2011 raid of a Fort Morgan, Colo., dairy found 89 percent of the staff were undocumented. Dairy owners are legally obligated to fire workers if they find out their papers are forged. Many farmers claim ignorance if and when their workers are found out to be in the country illegally.

Finding workers to don coveralls, muck boots and endure the occasional splash of manure, or spritz of urine is not as simple as putting an ad in the newspaper.

Dairy farmer Jon Slutsky says he’s had to let employees go after he found out they had produced forged documents.

“We do our part filling out our paperwork. We make sure they have the proper credentials. And if it turns out that they don’t, we can’t do that,” Slutsky said. “And they’re good people. But we can’t put our business in jeopardy for one person and we don’t.”

Chris Galen, a spokesman for the National Milk Producers Federation, says the dairy industry has different needs compared to farmers who run fruit orchards or grow vegetables, and it’s hard to get lawmakers to understand.

“They’ve said, ‘If you need to bring in workers, just use the seasonal visa program.’ And we’ve said, ‘Milk production is not seasonal. It’s perennial. It’s every single day, two or three times a day,’” Galen said. “That’s why it’s been hard to get people to do that job, because it’s difficult.”

What’s most frustrating for dairy farmers, Galen says, is how close they were to a partial solution. A comprehensive immigration bill, negotiated by the so-called Gang of Eight, which included Democratic Sens. Michael Bennet of Colorado and Dick Durbin of Illinois, created a visa program for low-skill agricultural workers. The measure passed the Senate in 2013, but failed to pass the House. Reform may be top priority for farm groups, but it isn’t for lawmakers right now.

“It’s going to be a challenge in this Congress because right now the focus is reacting to the White House executive action that took place late last year,” Galen said.

Farm groups like the American Farm Bureau Federation and United Farm Workers say President Obama’s actions were so narrowly tailored, they won’t do much to bring stability to the labor market for farm workers.

At Jon Slutsky’s dairy in northern Colorado, a full staff means he’s able to keep up with the demands of Denver-based Leprino Foods, one of the world’s largest manufacturers of mozzarella cheese, and the predominant buyer of Colorado milk. But he’s quick to note that given the turnover in his industry, next week he could be short again.

On a chilly winter morning, manager Humberto Gonzales tends to sick cows. Gonzales starts his day at 4 a.m. He wears dark blue coveralls and muck boots. Nearly everyone who works on the farm has stories of being kicked or bumped by the 1,200 pound animals.

“Sometimes it can be difficult trying to work with the animals. But, that’s work,” Gonzales said, through a translator. “I take care of the sick cows and I’m in charge of the milking parlor. And I assist with cows giving birth. A little bit of everything.”

It’s not glamorous work, overseeing milking parlor operations and carrying the smell of a dairy farm everywhere he goes, but it supports his wife and one year old child. The rest of his family still lives in Mexico. He grew up tending to animals in the Mexican state of Puebla.

“[I came here] to look for a better life,” Gonzales said. “The United States has possibilities to find a better life.”

Though with immigration reform mired in partisan politics, those possibilities can be hard to come by, especially as the United States and Mexico compete for a limited pool of farm workers.

While lawmakers decide whether to give a comprehensive immigration reform bill another chance, the country’s dairies will be looking for more workers like Gonzales, willing to uproot to take a job milking cows.