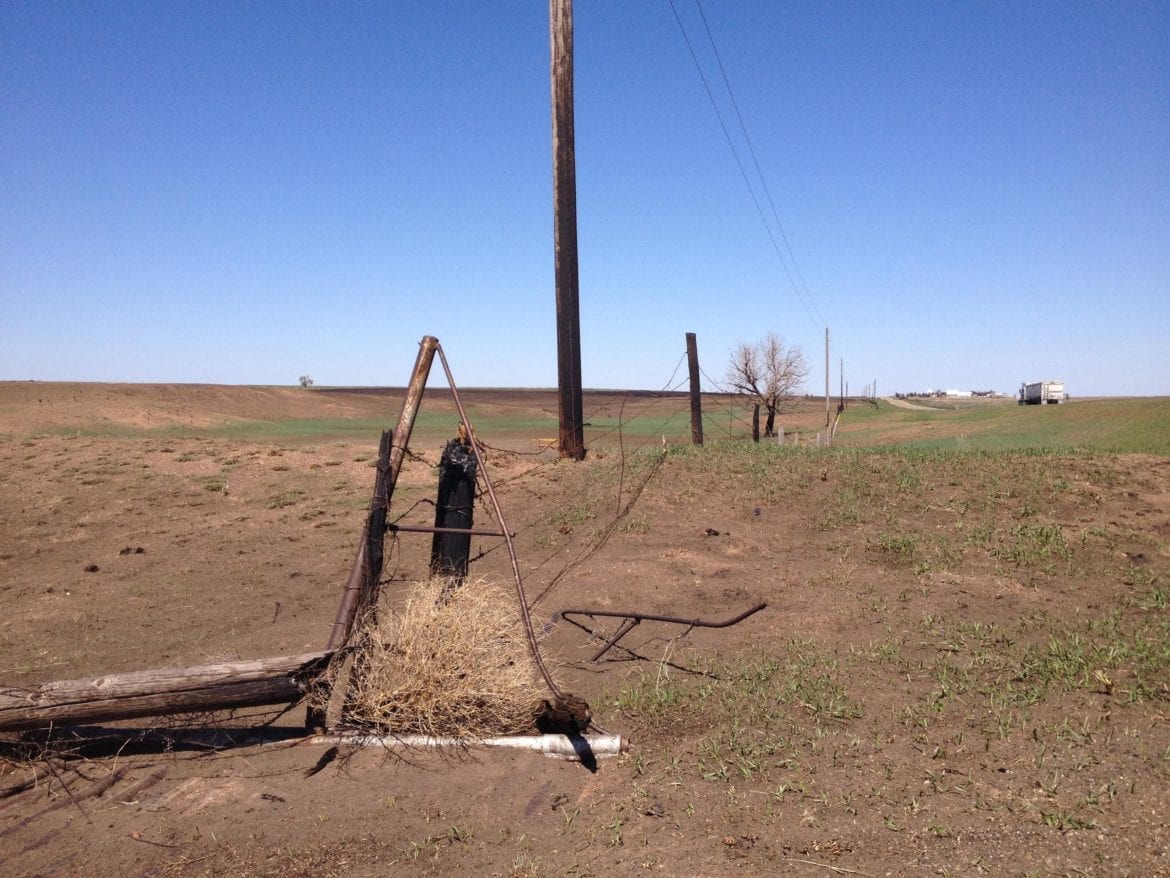 Gena Kirk did not realize the largest wildfire in Kansas history was closing in on the Kirk Ranch on March 6 until she got a call from her brother-in-law. After realizing that her herd was in danger, she jumped into her pickup and sped up the hill where several of her cattle were grazing.

As she herded her cattle onto a green wheat field that would not burn as easily as nearby dry grassland, winds gusting to 60 miles an hour fanned the flames quickly in her direction.

Weeks later, she drove in a diesel pickup truck to the spot where she realized the only road leading out of the ranch was blocked.

“When I turned the corner up here I could see flames going across the whole road,” Kirk says. “So I’m sitting right here thinking, ‘What in the world am I going to do?’”

The only option, Kirk says, was to drive through heavy smoke across a mile of pasture. About halfway to the highway, her pickup got stuck in deep sand.

“I’ve never seen anything like it,” Kirk says. “It was throwing fireballs. It was mean, ugly. It was loud.”

She had to abandon the truck and try to beat the flames on foot. As she ran for her life, Kirk stayed on the phone with a nephew who was trying to find her. She scaled fences and ran through barbed wire before making it to the state highway. Kirk says the fast-moving fire was only 70 feet behind her by the time she got to her rescue in the truck.

Today, ranchers like Kirk in Kansas, Oklahoma, Texas and Colorado face the monumental task of rebuilding their fences, homes and herds after a spate of March wildfires. 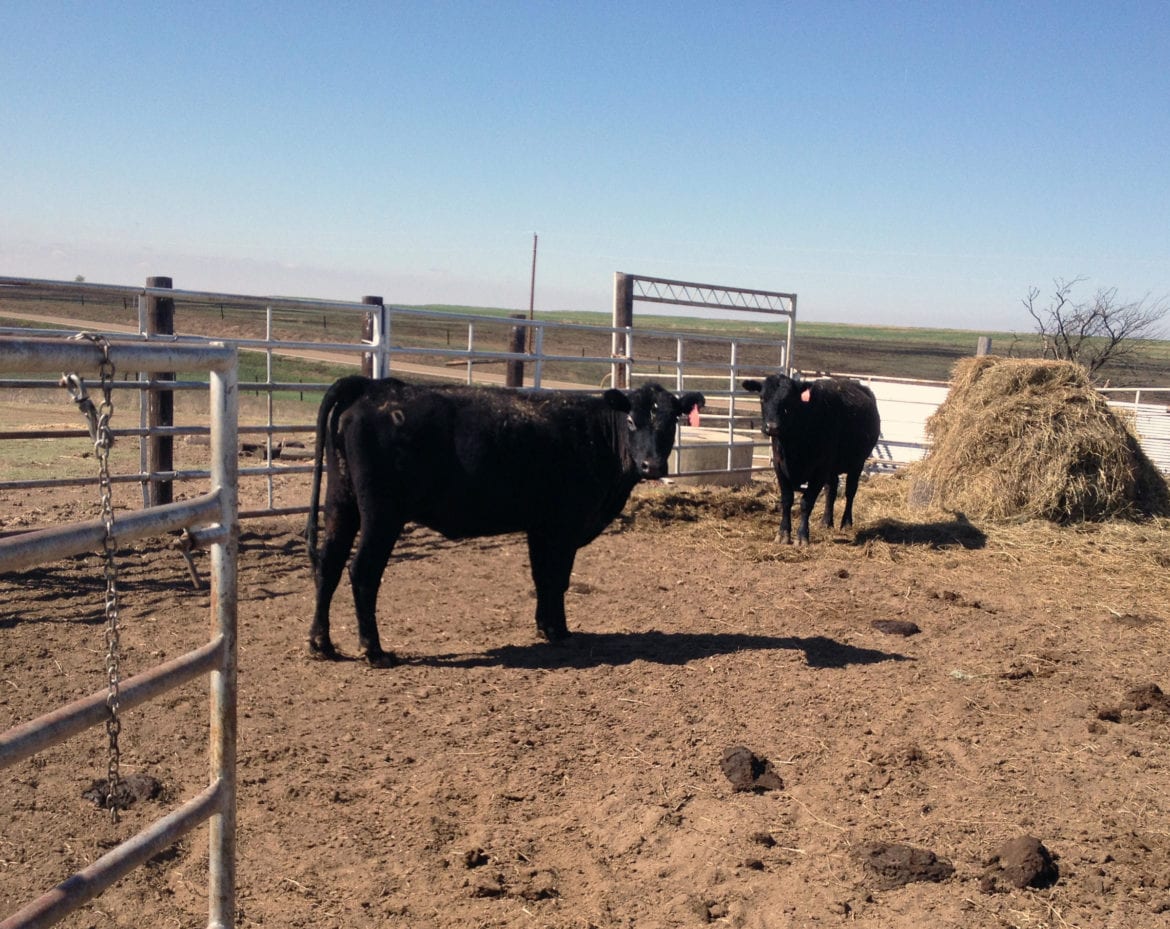 Aid in the form of hay and fencing from unaffected Midwest ranchers is pouring into southwest Kansas, where the Starbuck fire destroyed half a million acres of grassland the first week of March. Similar programs are trying to buck up ranchers elsewhere.

Kirk was treated at a local hospital for smoke inhalation. The fire destroyed her pickup, a tractor and other equipment. A group of friends with shovels managed to save her house as the fire burned right up to it. In the end, all but 15 of her 250 cattle survived. Still, Kirk says, the task ahead of her is daunting.

Hundreds of ranchers across the Great Plains face similar challenges. Seven people died in the late winter fires, along with thousands of cattle and hogs, as fires consumed more than a million acres.

More than 4,000 miles of fence were destroyed in Clark County, Kansas, alone, where the Kirk Ranch is located. Kirk worries that she may have to ask her banker for a half-million-dollar loan to rebuild.

Mark Lohrding, a rancher in neighboring Comanche County, feels lucky to have come through the fire as well as he did. The fire missed his home by 200 yards and he didn’t lose a single steer. Lohrding did lose 7,000 acres of grass and 23 miles of fence. He hopes federal assistance will help with the cost of replacing his fences.

“If you meet their government regulations, then up to $200,000 the government will cost share at a 75 percent rate,” Lohrding says

Kirk lost just 15 of 250 cattle, but suffered hundreds of thousands of dollars in damage, including to one of the ranch’s tractors. (Bryan Thompson | Harvest Public Media)

That will cover most of Lohrding’s fence replacement cost, but he knows of one rancher whose fencing losses are five times what the cap will cover. And Lohrding says ranchers have to finance and build the new fences before they can apply to be reimbursed.

The U.S. Department of Agriculture in March set aside $6 million in aid to help farmers and ranchers affected by the fires. Kansas Sen. Pat Roberts, who chairs the Senate Agriculture Committee, says the funding, delivered through USDA’s Environmental Quality Incentives Program, can be used to restore grazing lands, rebuild fencing and protect damaged watersheds.

The USDA also agreed to allow grazing on land put aside for conservation in 13 of the Kansas counties affected by the fires.

“I appreciate the Department allowing Kansas ranchers who have lost their rangeland due to the largest wildfire in our state’s history access to timely, deliverable assistance,” Roberts said in a news release. “Producers in Kansas, Oklahoma and Texas are struggling to feed what is left of their herds. They need all the help they can get.”

Lawmakers in Kansas, Texas and Oklahoma declared states of disaster in many of the affected areas in an effort to easier connect ranchers to disaster relief.

The fires in Colorado were much smaller, but still burned 30,000 acres. Colorado Sen. Cory Gardner invited those affected to contact his office for help.

“We will support our farmers and ranchers as they navigate the federal bureaucracy and help them through this difficult time,” Gardner said in a press release.

For many ranchers, however, federal and state assistance programs won’t cover all of their losses.

Bryan Thompson is a reporter for the Kansas News Service, a collaboration covering health, education and politics across the state. You can reach Bryan on Twitter@KSNewsBryan.