Farmers school themselves on soil health to revive dying dirt 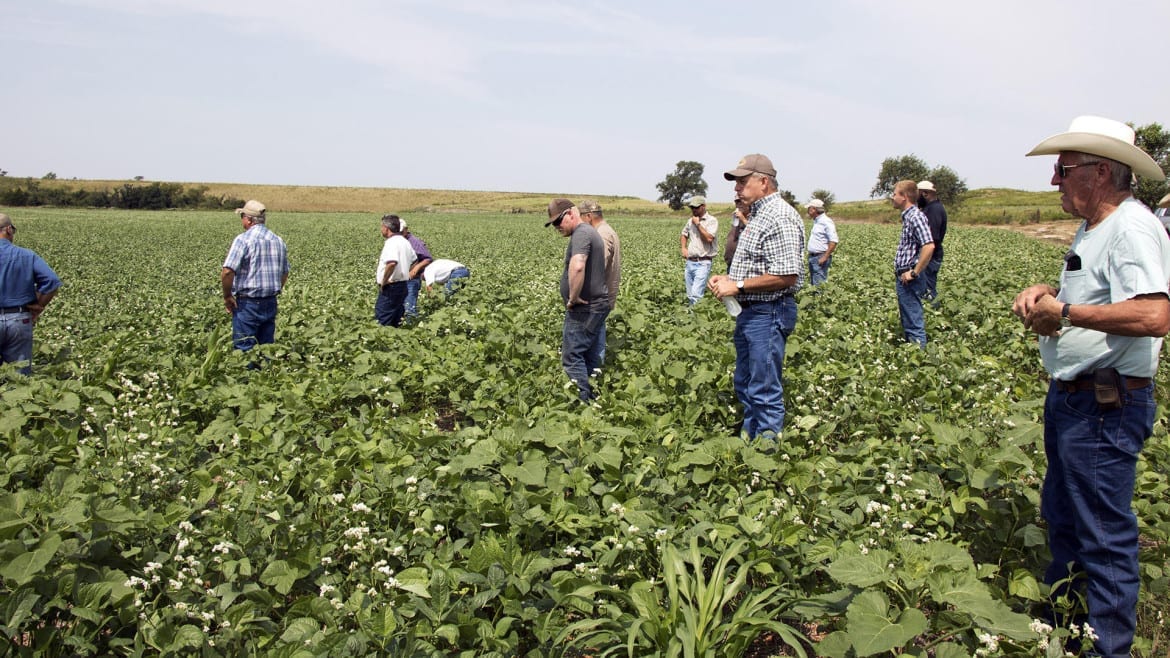 Generations of tilling and planting on the same land have left the nation’s soil in poor shape. And if farmers don’t change the way they grow crops, feeding the future won’t be easy.

As farmer Jordan Shearer from Slapout, Okla., puts it, “we’re creating a desert environment by plowing the damn ground.”

More than 800 million tons of topsoil blew away in a single year during the Dust Bowl. In response, farmers planted trees, irrigated crops and changed plowing techniques to prevent another Dust Bowl.  But they kept plowing, planting wheat, tilling again, and planting more wheat in the same spot — a cycle known as conventional mono-cropping.

Ray Archuleta is an agronomist with the U.S. Department of Agriculture’s Natural Resource Conservation Service. Part of what he does for a living is dig holes to study soil health across the country.

“Tillage is an intrusive tool,” Archuleta said. “To me, it’s a national crisis. When you drive through the whole country, it’s very sad to see that our land is very, very diminished.”

Plowing up ground can help farmers deal with pests or control weeds. But tilling also excites bacteria that eat the organic matter in the soil plants thrive on, which destroys root and worm pathways that allow moisture to penetrate the ground, he says. Over time, the soil dies, and only more land — and more fertilizer — keep crops growing.

Getting back to nature

The solution is to stop tilling and rotate cash crops with cover crops— assortments of local plants that cover the field and restore organic matter into the soil when they die. Think of it as large-scale composting. Archuleta calls it farming in nature’s image.

“It’s about mimicking nature and understanding the ecology,” Archuleta said. “It’s no-till with the covers, with the animals. It’s all of it as a system.”

Shearer, the Slapout farmer who also works for the Oklahoma Association of Conservation Districts — which promotes modern farming practices that preserve soil health — says moving away from that natural system is killing Oklahoma’s once-fertile soil.

Shearer and dozens of farmers attended an August workshop held by the Oklahoma Conservation Commission. The event, on a Dewey County farm near Leedey — a blip on the map with 435 residents — was organized to encourage the adoption of more sustainable farming practices.

Attendees like Roger Ommen were eager to learn more. Ommen, whose farm is a mile outside of Leedey, just planted his first cover crop.

The benefits of no-till and cover crops abound. The soil stays cooler and retains water better. In many cases, crop yields and quality go up, and farmers can produce more crops with less land.

Still, there are hurdles to making the move away from traditional farming. New equipment is expensive and the transition takes time. And old habits die hard. Right now, 75 percent of country’s cropland is tilled, and less than 1 percent have cover crops.

This story was produced by StateImpact Oklahoma, a collaboration of NPR member stations in Oklahoma.