Killing millions of pigs and raising the cost of pork, the outbreak is forcing researchers to dig deep 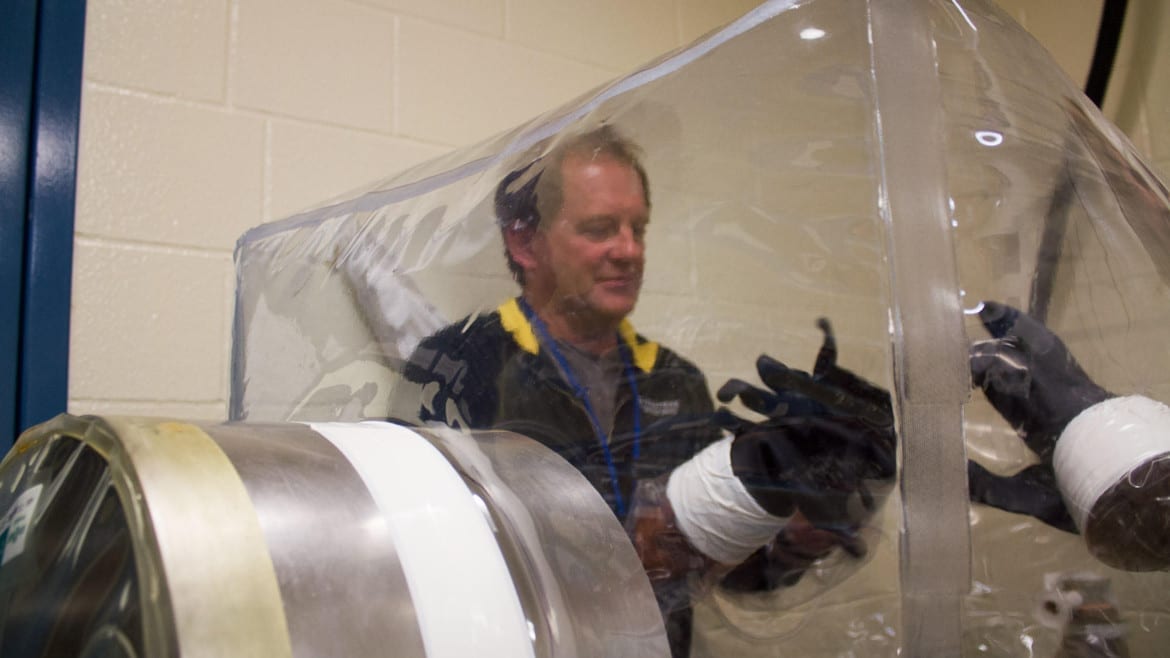 Minnesota veterinarian and researcher Scott Dee, of Pipestone Veterinary Services, fits his hands inside the gloves used to access a germ-free pen. During studies with PEDV, the germ-sealing qualities of the pen were used to keep the virus in, as piglets sampled feed spiked with it. (Photo: Amy Mayer | Harvest Public Media)
Share this story

Editor’s Note: This is Part II of a two-part series from KCPT’s partner, Harvest Public Media, tracking the Porcine Epidemic Diarrhea. To catch up on Part I, click here.

Veterinarian and researcher Scott Dee doesn’t much look the part of a detective, in his jeans and company polo shirt.

But when a virus never before seen in North America swept through the network of hog farms where he works, Pipestone Veterinary Services, in January 2014, he had his first clue.

“These farms had the same pattern of infection,” Dee said.

Porcine Epidemic Diarrhea (PED) virus has killed millions of pigs over the past two and a half years, as much as a tenth of the total U.S. swine herd. While many consumers may not know much about it, they likely paid the price: the outbreak caused a sharp rise in the price of bacon, ribs, and chops during the summer of 2014.

Since then, Dee has played a researching role in an outbreak that has dramatically changed the meat industry, making a mild-mannered Minnesota veterinarian into a kind of germ gumshoe as he traced the virus from Beijing to Des Moines.

He’s working fast. The industry fears that PED, not yet eradicated and known as a pernicious, intrepid world traveler, will come charging back this winter. PED spreads best in the cold, so Dee and other researchers are positioned to watch what unfolds in the coming months. And they’re worried.

“I think we’re going to have a year of increased case load because the national herd immunity will wane,” Dee said, referring to sows who were exposed to the virus, recovered and could pass some protection on to their piglets. Many of those sows are now gone.

“People will relax, security-wise. We’ve been in a little bit of a recession for a while, in regards to PED, so people will go back to their old ways, that’s just human nature.”

Dee’s first clue was literally driven onto the Pipestone farms.

“They needed a feed delivery, it was an emergency request,” he said. “Feed went into a specific bin, the animals that ate that feed became sick.”

Epidemiology suggested the virus was delivered along with the feed, an observation other swine veterinarians had made, too, even on farms like Pipestone’s that practiced strict biosecurity measures. Biosecurity can include disinfecting trucks, trailers and other equipment used in transporting pigs or manure; limiting visitors to the farm; requiring changing boots or washing footwear before entering a barn; or even showering on the way in and out of a barn.

Dee had an idea. Treating the empty, suspect feed bin like the site of an infection, he swabbed its sides with a paint roller, much like a nurse swabs a patient’s throat, checking for strep. He sent the rollers to South Dakota State University’s Animal Disease Research and Diagnostic Laboratory on the Brookings campus, about an hour from Pipestone, Minn.

There a team of veterinarians, technicians and researchers processed samples from Dee’s paint rollers and found the virus. They also discovered PED stuck around on all manner of lab surfaces – despite diligent efforts to clean them.

Lab supervisor Michelle Mucciante marveled that she would still get positive genetic tests for PED even after the team scrubbed and disinfected a room multiple times, proving the virus not only infectious but insidious.

“It just shows what a huge issue it is for your average pork producer,” Mucciante said. “We’re dealing with sealed surfaces in a lab setting.”

The virus is spread through oral-fecal transmission, meaning pigs can get sick from manure.  Just as the virus can survive in feed bins and labs, it can readily live in and travel with manure. That extended the biosecurity challenge to manure, feed and hog transport trucks and all the places those trucks might go.

Dee’s next step was to probe the feed for more specific clues. He looked at 18 individual ingredients to see whether the virus could live in any of them. He found there were nine that could harbor live virus, including soybean meal and a fat called choice white grease, an animal byproduct often fed to swine.

“It was this really eclectic group of ingredients that really had no commonality other than PED like to live in them,” Dee said.

Actually, Dee had selected the ingredients in his study because of one other very important trait they had in common: they could be imported from China.

During the months leading up to and through the outbreak of the disease, public records obtained from the Food and Drug Administration through a Freedom of Information Act request by a private law firm show more than three dozen ingredients used in animal feed and pet food were imported from China to the Midwest. Researchers believe the PED virus that first emerged here came from China because the two are very similar genetically.

Dee continued to be intrigued by the role of feed. But he needed to figure out if the virus remained infectious from China to a hog farm. Such a journey would likely take more than a month and the virus would be exposed to a wide range of temperature and humidity conditions.

So he devised a way to simulate those conditions, to test how the virus would fare. Pipestone bought a used environmental chamber for $10,500 and it was set up in a microscope room in the SDSU lab.

The chamber looks like a fancy freezer with monitors and buttons on the top. Aaron Singrey, a technician at the lab, used the three buttons to input historic weather data that reflected a 37-day journey. Conditions mimicked sailing on a huge cargo ship from China to San Francisco, port stops for clearing customs, and the 1,800-mile trip by truck across Interstate 80 to Iowa.

Into the chamber the researchers placed small, plastic baby food containers with different ingredients, spiked with the PED virus. After the simulated trip across the Pacific Ocean and much of the United States, the containers came out of the chamber and lab workers fed the samples to 24 baby pigs.

What happened? Dee expects to publish his results soon. But already he knows PED has changed the meat industry.

“Feed has never been a risk-factor for veterinary diseases, livestock diseases, in the past,” he said. “So the ability to show that feed can harbor and transmit, PED in this case, I think is a breakthrough and changes the paradigm about how we think about biosecurity at the farm level.”

PED is likely to remain a formidable threat. But will researchers ever get to the bottom of the mystery and discover exactly where it came from?

“There’s been a lot of people asking that question, from the very beginning,” said Rodger Main, director of the Veterinary Diagnostic Lab at Iowa State University.

“And the short answer is, there’s no clear answer. No smoking gun, if you will.” 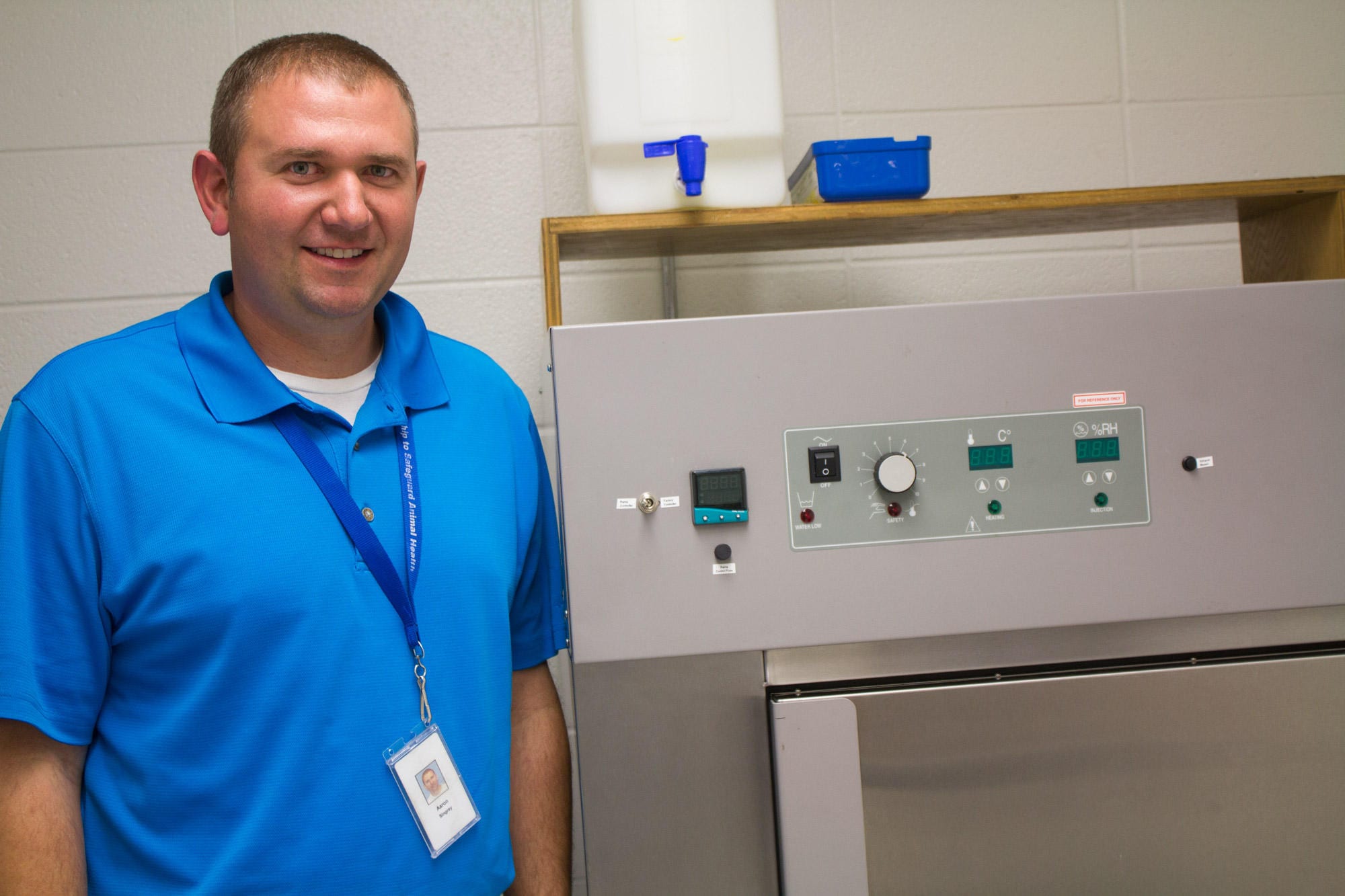 Can PED be prevented?

PED’s devastation has also prompted additional research into feed, including how to safely manufacture it if ingredients are contaminated. Jason Woodworth, a swine nutrition researcher at Kansas State University, has been looking at the ability of PED to survive in feed mills. His work advances Dee’s identification of the feed bin as a player in PED’s dispersal.

Once the PED virus has infiltrated a barn, a bin or, especially, a feed mill, it’s very difficult to get rid of it, Woodworth said.

“If you let it in,” he said, “there’s widespread contamination in the dust and the surfaces and all throughout the mill.”

His research also has found that the mill may need to process several batches of feed before it can rid the place of PED.

As Dee searched for the infectivity risk of contaminated ingredients, Woodworth’s work has teased out ways to kill the virus so it can’t make pigs sick, even if the feed still tests positive for the virus.

Here’s why: the molecular tests that quickly identify PED only detect the presence of genetic material of the virus, not whether it is infectious. If it’s not infectious, it still will show up on the test but may not be harmful to pigs.

It takes more time and advanced testing to make that distinction. So Woodworth’s group developed recommendations for feed manufacturers on how to mitigate the presence of PED even when they didn’t know whether it was infectious.

For example, they figured out that as long as feed reaches a certain temperature in the process of being made into pellets, any PED that remains present will not be harmful.

“The pellet mill and conditioning set-up that would be very typical of those observed in the industry,” Woodworth said, “is capable of reducing or eliminating PED infectivity risk.” His work also offers recommendations for getting rid of PED once it has been identified in a mill’s feed.

“We looked at how long it took, or how many batches it took, to remove the PED contamination from in the equipment,” Woodworth said.

The answer: at least three batches. Fortunately, Woodworth said because formulas are different for pigs depending on their age, a PED-positive batch could be made into feed for older pigs, protecting the youngest, most vulnerable piglets if the PED was not killed in the processing.

The worst period of the PED outbreak was early 2014, but the disease remains present and continues to infect hogs. Last winter wasn’t as bad, but veterinarians and researchers don’t know which of two factors is the reason.

One possibility, said Aaron Lower, a veterinarian at Carthage Veterinary Services in Illinois, is “we’ve fundamentally changed something at the feed processing or ingredient level that has stopped transmission.”

If that’s the case, the virus should remain in check this year. But, he cautions, if lingering herd immunity from the first terrible winter is what protected the animals last year, then things could be bad again as soon piglets are born from mothers with no immunity.

Hog producers have learned to manage some diseases, such as transmissible gastroenteritis (TGE), another diarrhea-causing virus. But it remains to be seen whether that will be possible with PED. Iowa State University pathologist Greg Stevenson, among the first to identify PED, said it doesn’t behave like TGE.

“Each individual pig that gets the disease sheds more than a hundred times more virus than they do with TGE,” Stevenson said, “and they shed it for a longer period of time.”

That means this globe-trotting bug will be keeping farmers on alert — especially as the temperature drops, because PED has already shown how much it loves to spread during a cold Midwestern winter.