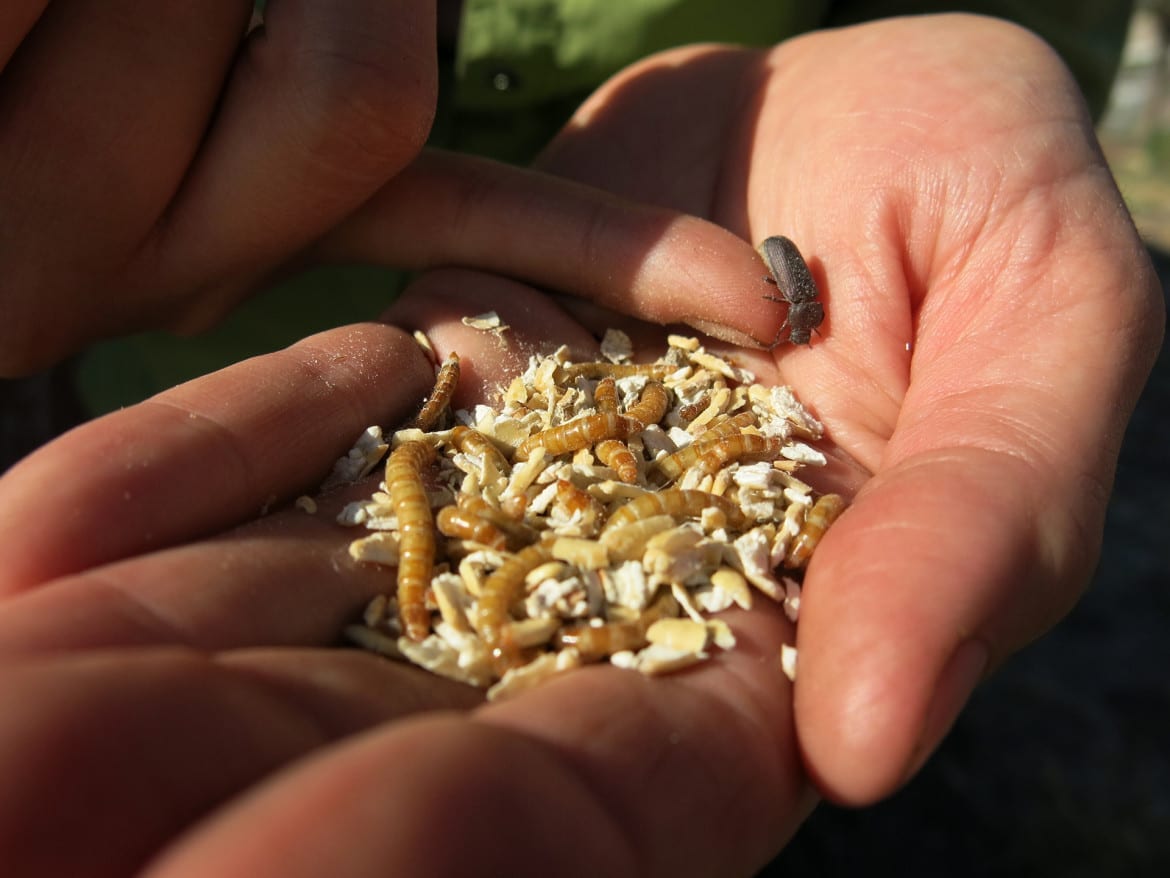 This is the fifth and final part of Harvest Public Media’s week-long series Choice Cuts: Meat In America, examining how the meat industry is changing the U.S. food system and the American diet. The documentary on the subject, which aired Thursday on KCPT, will re-air Sunday at 9am and Monday at 10pm on KCPT.

Beef, poultry and pork are staples of the American diet, baked into the country’s very culture, and backbones of the agricultural economy. But lately, the meats have been saddled with some baggage.

Consumer groups are crowing about everything from meat safety to the health implications of a meat-heavy diet to environmental concerns about large-scale livestock operations.

All the hubbub gives savvy entrepreneurs a business opportunity to offer up alternatives, and eke out a little space on the American dinner plate for their products: plant-based burgers, lab-grown chicken breasts, and cricket tacos.

“There is a confluence that I can’t find a parallel to anywhere in American history to this particular moment when meat consumption is under so much attack and when so many people are arguing in favor of an alternative,” said historian Maureen Ogle, author of In Meat We Trust, which charts America’s carnivorous past and present.

The sales of so-called protein alternatives, or lab meats, still pale in comparison to the money spent on traditionally-raised meat. Think of the average person’s protein consumption as a pie chart. The biggest pieces of that pie are poultry, beef and pork. Then there’s a tiny sliver, so small you can barely see it, devoted to meat alternatives.

What proponents of the alternatives ultimately want to know: Just how big can that tiny sliver get?

“Boy, that’s the $64 billion question that no one knows the answer to yet,” Ogle said.

Taylor Ferguson is an aspiring rancher in Denver, Colorado. 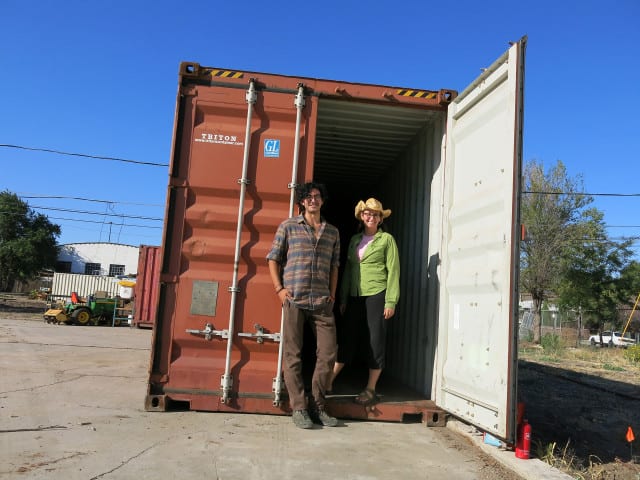 He’s the proud steward of a hot, humid shipping container in the city’s Westwood neighborhood. The tall, curly-haired recent college graduate purchased the box to be the home for his livestock.

“Right now, it’s not terribly glamorous,” Ferguson said. “There will be a wall here and a door and when you open this door you’ll walk into our farm which is just shelves of crickets.”

Yep, crickets. He plans to have mealworms here too.

Ferguson and his business partner Wendy Lu McGill are starting Colorado’s first cricket and mealworm farm, Rocky Mountain Micro Ranch, where the insects will be grown for people to eat, not as bait for fish or food for pet reptiles. Similar farms are up and running in Austin, Texas, Youngstown, Ohio and Toronto.

Ferguson got his start in agriculture in college, studying up on insect husbandry in his bedroom, and dropping a few humanely-slaughtered crickets onto a salad.

“The crickets weren’t that loud,” Ferguson said, of the tank that housed his edible insects. “They were almost romantic-sounding. I have sweet memories of pulling the crickets out every night and watching them do their thing.”

McGill calls them microlivestock, and she says they already have customers lined up to buy them, mostly adventurous chefs looking for a quirky addition to their menu.

“It’s a food. It’s not a food that’s in our culture currently, but it is a food and it’s a food for a lot of people around the world,” McGill said.

The people pushing insect cuisine make compelling arguments. They say insects are high in protein and calcium, and they’re easier on the environment, requiring fewer inputs than other protein sources. They produce less waste. Even the United Nations is on board with the idea.

The Business Of Meat Mimicry

The idea of taking a bite of a cricket taco is still a little too stomach-turning for consumers looking for meat alternatives. While those companies try to change consumer tastes, and persuade people to eat insects, there’s a whole other industry churning out products meant to look and taste just like the traditional meats consumers are used to. 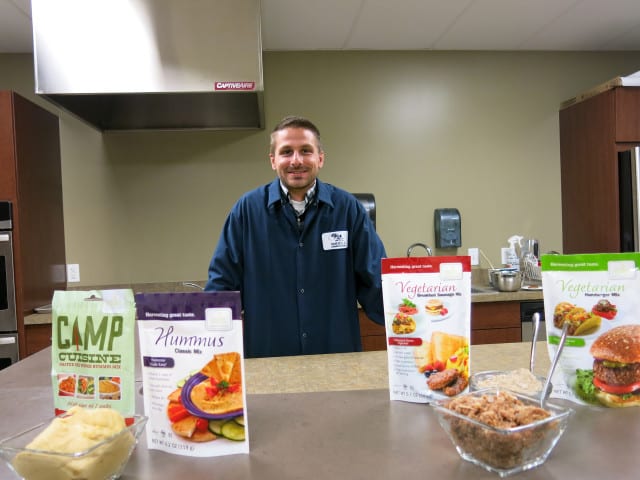 At Rodelle, Inc., in Fort Collins, Colorado, you’ll find food scientist Devon Bruntz in the company’s test kitchen. He led the team that created the company’s line of Harmony Valley imitation meat, all soy-based, and meant to act just like ground beef and breakfast sausage. At the moment he’s forming a handful of brown, soy-based mush into a patty.

“We didn’t just brown it. We added some pinks and different hues to get that color you’d expect,” Bruntz said.

Consider this the art of meat mimicry. There’s no point in reinventing the wheel, Bruntz says. Give grocery store shoppers something that tastes and acts like beef — but that’s easier said than done.

“Everything you can imagine we failed on. It never gets any easier hearing someone say ‘ew’ when they taste something you created that you thought was all right,” Bruntz said.

Rodelle got into the meat imitation game in 2012 after some larger retail customers asked for it. Since then they’ve rolled out more products, including meat substitutes targeted at backpackers and campers.

They joined an increasingly crowded field of plant-based imitation beef and chicken companies getting their footing in grocery stores. Mainstays and industry veterans like Boca and Morningstar are mainstream enough to take up whole racks in the frozen food section. Newer start ups like Missouri-based Beyond Meat are breaking through in texture and taste, making a plant-based burger that “bleeds.”

Soy is the heavy-lifter of the alternative protein market already, and it’ll continue to be in the foreseeable future, according to a 2015 report from research firm Lux Research. Analysts there project soy consumption will continue to climb for the next 10 years, and soy products will make up roughly 80 percent of the alternative protein market by 2024.

But it’ll take a lot of soy to put a dent in the demand for traditional meat.

“Do I think it’s ever going to take over pork, chicken or beef? Not in my lifetime,” said Bruntz. “But do I think it’s going to be a bigger piece of the pie? Yeah.”

When a team of Dutch researchers debuted a lab-grown hamburger in 2013, it was enough to give foodies all over the world a bit of pause. Here was a piece of meat, grillable animal flesh, where no livestock was harmed.

At the time, the research team’s leader, Mark Post, told The New York Times that the purpose of the burger was to, “let beef eaters eat beef in an environmentally friendly and ethical way.”

The first burger cost a whopping $325,000. Researchers have since said they’ve refined the process to bring that down to $80 per kilogram of lab-grown beef, or roughly $11 for a modest-sized hamburger. But the scientists admit it’ll take decades before large “carneries” are commercially viable.

“To culture a hamburger in the laboratory, of enough volume to satisfy a number of consumers, is extremely expensive,” said Keith Belk, a professor of meat safety and quality at Colorado State University.

That’s why shoppers can’t buy an in vitro package of meat just yet. Scientists have a long way to go before cultured beef tastes like the meat butchered from cattle that lived actual lives.

As this fledgling sector of the protein alternative market gets its legs, other researchers are digging in to see just how environmentally-friendly lab-grown meats actually are. Some have shown a drop in methane emissions and a reduced demand for water. Others have poked holes in the theory that lab burgers are the answer to the current and future problems facing meat producers.

“The only thing that will make lab meats mainstream will be some fundamental shift in culture, or possibly in climate, that simply makes meat production too politically or too economically expensive,” said author Maureen Ogle.

Savvy entrepreneurs have attempted to sway Americans away from traditional meat throughout the country’s entire history, Ogle says. Most found little success. But she says right now there’s unparalleled momentum toward protein alternatives, with millions of dollars being pumped into plant-based burger companies and laboratories where chicken and beef cultures are grown in petri dishes.

“We could be on the cusp of a shift,” Ogle said, “where people will finally stop eating so much meat.” 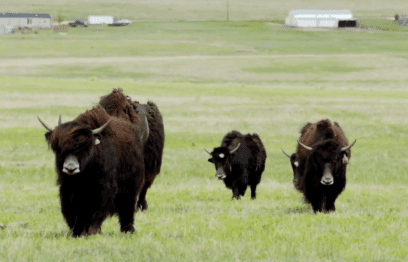 As the global population rises, will carnivores see new alternatives on their plate? Are yak burgers or vegetarian options likely to fill the future? Or will we be seeing more beef, chicken and pork? Harvest Public Media looks at the future of meat production.