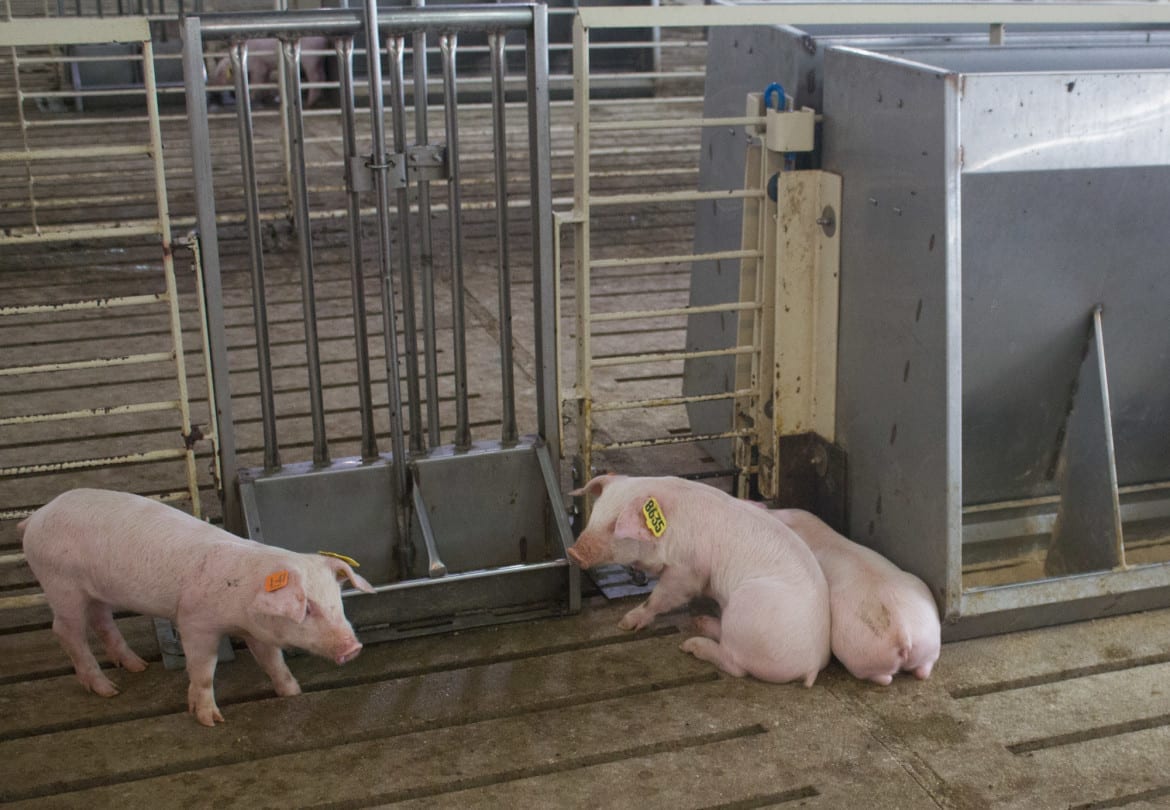 This is part three of Harvest Public Media’s week-long series Choice Cuts: Meat In America, examining how the meat industry is changing the U.S. food system and the American diet. The documentary on the subject will air 7:30 pm this Thursday on KCPT.

One of the most important tools of modern medicine is in jeopardy. In the 20th century, antibiotics turned once-lethal infections into manageable diseases. They also contributed to the transformation of meat production in America.

But now, overuse of the drugs in both humans and animals is to blame for the growing threat of antibiotic-resistant bacteria, which the U.S. Centers for Disease Control blames for at least 23,000 deaths a year.

Researcher and hog farmer Gene Gourley is keeping busy conducting tests on treatments that could be alternatives to the use of antibiotics in swine. (Photos: Amy Mayer | Harvest Public Media)

“We are nearly on the brink of being back in the pre-antibiotic era,” said Loreen Herwaldt, a University of Iowa professor of infectious disease and internal medicine. “And that’s pretty scary, in terms of not having anything to treat people with who have serious infections.”

As doctors came to rely on antibiotics for their patients, farmers discovered the benefits of using them in livestock.

“I think it’s fair to say that our modern livestock production systems have co-evolved with antimicrobials,” said Hans Coetzee, a professor of veterinary and production animal medicine at the Iowa State University College of Veterinary Medicine.

The medicines reduced the spread and severity of certain diseases. And they also helped animals reach market weights faster, increasing the meat supply, and farm profits, along the way.

But as far back as the 1970s, worries began to emerge about the overuse of antibiotics in meat production, and the government was already predicting problems.

To ensure we still have antibiotics to treat everything from earaches to staph infections to tuberculosis in humans and myriad diseases in livestock, both doctors and farmers need to use them carefully.

It’s a charge many consumers and politicians are calling for and even global companies like McDonald’s are making moves to serve only meat made without the use of antibiotics.

The government is also stepping up its game.

This year, President Obama launched an initiative to combat antibiotic resistance that specifically called for reducing the use of the drugs on farms. And now the FDA is reigning in drug makers, asking them to stop promoting certain antibiotics for use in fattening up animals. That’s a voluntary change, but Mike Murphy, a veterinary medical officer at the FDA’s Center for Veterinary Medicine says all the affected companies have agreed to comply.

Pat Winokur says she and other physicians bear responsibility for preventing unnecessary use of antibiotics in people, which she says is a bigger driver of antibiotic resistant infections in people than the use of the drugs in livestock.

Also, while antibiotics will still be available for use in combatting or preventing livestock diseases, farmers will not be able to buy feed containing the medications in an over-the-counter manner. A written order from a veterinarian will be necessary.

“That change is part of Center for Veterinary Medicine’s current views on judicious use,” Murphy said. “And the judicious use initiative is generally thought to be an important program for reducing the risk of antibiotic resistant pathogens in humans.”

Some critics are skeptical of voluntary changes and argue the rule changes don’t go far enough.

Kathy Eckhouse is a co-owner of La Quercia, a maker of specialty meats in Iowa that buys lots of pork. Their suppliers either use no antibiotics at all or, she said, they use them exclusively to treat a disease and keep the animals back from the market for 100 days after the last dose is given.

She says even under the new FDA rules, producers can give animals antibiotics when they’re not sick. She calls that a “big barn door to drive something through.”

To be sure, there are also situations when people get antibiotics prophylactically—say when one college student gets bacterial meningitis and her roommates are given antibiotics even if they aren’t sick, to prevent the infection.

But Eckhouse and others fear that farmers will still find ways to give large groups of animals sub-therapeutic doses of antibiotics, which is the kind of widespread use that can speed resistance.

Many livestock producers, though, feel they have been judicious all along.

Gene Gourley comes from a hog-raising family and he conducts research at a barn in Stanhope, Iowa. Here on a recent fall day, he walked through pens of four-week old piglets. Some were vaccinated so he could compare their development to those who did not receive the vaccination.

Vaccines are one tool Gourley credits with helping him reduce his antibiotic use well in advance of the FDA rule changes.

“Since 2005 we haven’t had any growth-promotants or antibiotics in finishing feeds,” Gourley said. “So the last four months of life, the animals won’t see antibiotics, unless there’s a health challenge.”

Gourley said very young pigs are vulnerable because their full immune systems have not yet developed, so sometimes they need an antibiotic.

“It’s a really small usage, and it’s usually early in life,” he said, “to try to help them in that early stage of development.”

While that kind of use will still be permitted under the new guidelines, Gourley’s busy fielding inquiries from many companies eager to tap a market likely to grow: alternatives to antibiotics.

“We’ve got enzymes that we’re looking at, we’ve got prebiotics, probiotics. There’s several different components, alternatives, that we can try and use,” Gourley said.

Coetzee, the Iowa State professor, said veterinary researchers share the commitment human doctors have to preserving the effectiveness of antibiotics. That may even spur the two sides to work together, he said, something not yet part of his career in veterinary pharmacology.

“We’re starting to recognize that some of the challenges we face are quite similar,” he said, “and I think some of our production systems that we work with every day on the veterinary side actually would serve as very good model systems for understanding the emergence and dissemination of resistant bacteria.”

As in human medicine, Coetzee said growing understanding of the bacteria that belong in an animal is helping spark research that could lead to antibiotic alternatives. One promising lead is probiotics.

“That’s an area where there is intense research at this point,” Coetzee said, “to try to understand what the impact is of these compounds on that microbiome.”

Coetzee said it’s not beyond the realm of possibility that someday yogurt, or a different vehicle for increasing the presence of good bacteria in the gut, could be part of animal diets.

For now, he’s hoping veterinarians and livestock producers can develop and adopt systems, perhaps similar to what are used in human medicine, to ensure they are good stewards of precious antibiotics. Their businesses, and everyone’s health—human and animal—depend on it. 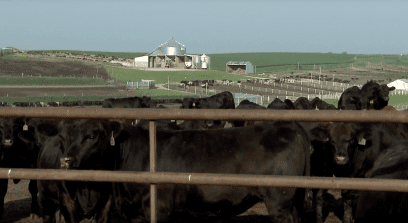 Greenhouse gas emissions associated with beef production are higher than electricity, coal and other industries. That’s why beef producers are closely studying how their industry impacts the climate and where changes can be made.