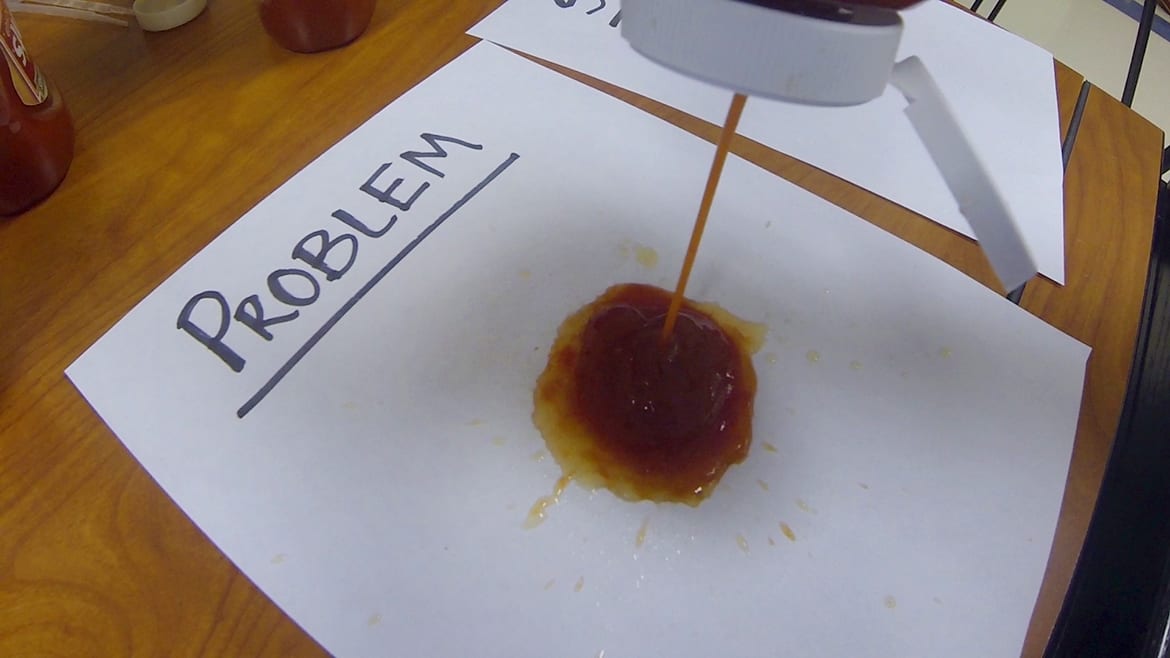 As students in the Project Lead the Way program at North Liberty High School, Richards and Thompson have researched and developed a bottle cap that prevents that first squirt of ketchup from being a watery mess.

“Wet bread is gross,” said Thompson, explaining why they decided to tackle the problem.

Project Lead the Way is a national program that takes a hands-on and project-based approach to STEM education for elementary, middle and high school students.

“I get to turn the kids loose, let them be creative and find innovative solutions to problems,” said Brett Kisker, who teaches Project Lead the Way classes at North Liberty High School.

“The prompt was that they had to come up with something that was relevant to them. So we always start with the phrase, ‘it really bugs me when.’”

Kisker was skeptical when Richards and Thompson first suggested their problem.

“I said that they could just shake the bottle and that there is a free solution,” Kisker said. “But they did a lot of research and they had me convinced that this problem really does exist.”

After some initial surveys indicated that others shared their distaste for the problem, Richards and Thompson reviewed existing patents involving ketchup.

“There are a surprising amount of ketchup-related patents out there,” Richards said. “There was one – it’s kind of hard to explain – but basically it’s a way to inject ketchup into a french fry, It was a bit extreme.”

Having poured over patents to verify that a solution didn’t already exist, they each sketched out 30 different ideas for a design.

From 60 potential designs they narrowed it down to five, and then to a final design that they affectionately refer to as “the mushroom” or “the shroom.”

“It is based on the pythagorean cup idea,” Thompson said. “It’s also the same principle that toilets work off of.”

The prototype, which they made using a 3-D printer, resembles a regular cap for a squeezable ketchup bottle except for what looks like an upside down mushroom on the underside of the cap.

“Basically kind of what’s happening is that there is no way the ketchup can go through there,” Richards said, pointing to the portion resembling a mushroom top. “So (the pressure) pushes it up and over it. Then the water sits in this little basin right here and the ketchup comes out.”

Market research conducted by the students indicates that this mushroom cap could be made for 22.6 cents and that consumers might be willing to pay up to $3.00 for the solution.

Despite the potential profits, Richards and Thompson have focused most of their energy on perfecting their design, and less on what sorts of patents or business ventures they might pursue.

“Mostly it’s just been fun,” Richards said. “There’s not many classes where you can do a year long research project on ketchup.”

Richards and Thompson will showcase the fruits of their labor along with about 250 area high school seniors Tuesday, April 15 at the Project Lead the Way Senior Showcase at Union Station.