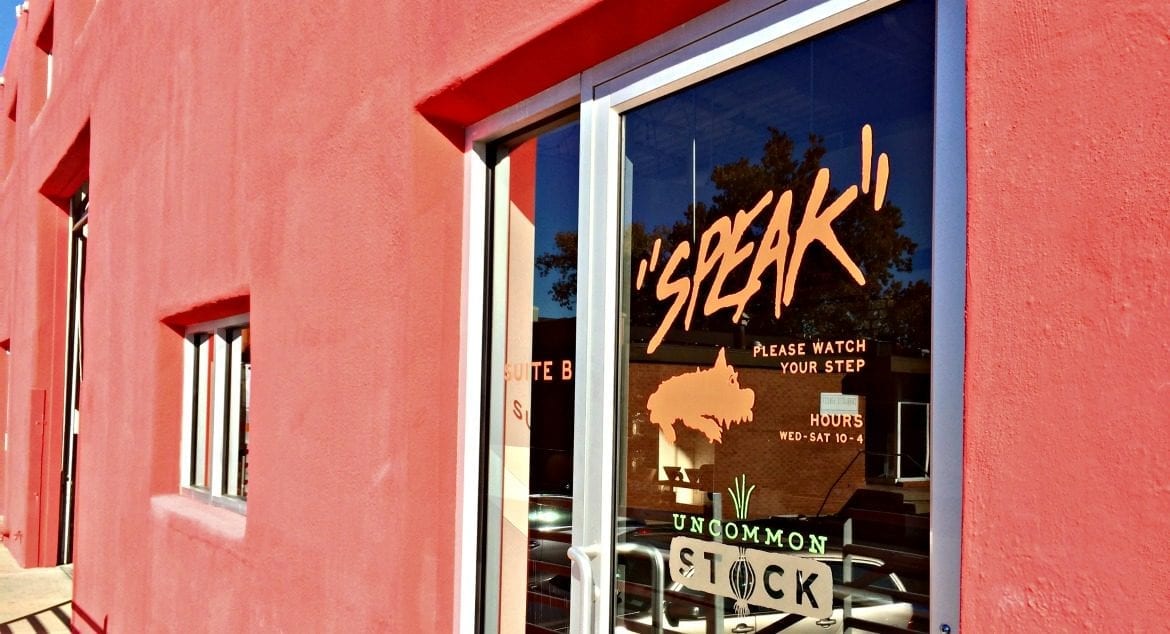 Speak is open and serving up sandwiches. (Photo: Jonathan Bender I Flatland)
Share this story

Todd Schulte quietly opened a sandwich shop with the soul of a deli last week. After a year of working to fine tune pastrami and searching for proper sliced rye, Speak is now operating out of a shared space with Uncommon Stock, a sister soup company, at 1000 W. 25th St.

On a recent Tuesday morning, Schulte is pouring water into the massive kettles in the back kitchen for what will be become quarts of potato leek soup and gumbo. An old General Electric refrigerator hums in rhythm behind the counter of Speak, the new sandwich joint from Schulte and co-owner Tracy Zinn (the pair also co-own the Genessee Royale Bistro in the West Bottoms).

“We’re a sandwich shop with deli roots,” said Schulte. “A lot of the items on the menu have strong roots, whether it be Jewish, Italian or American.”

The menu leans into those deli traditions with house made pastrami, roast beef, chicken salad, and egg salad.

“It’s straightforward chicken salad. We’re not messing around with curry or grapes or tarragon,” said Schulte.

The pastrami is a brined brisket rubbed with paprika, coriander, black pepper, mustard seed, and other spices. It’s smoked for roughly three hours and then steamed for another five or six. The pastrami is then sliced thickly and served on Wheatfields Bakery rye with deli mustard, pickled mustard seeds, a sliced pickle, and dill frond.

Schulte envisions the menu classics with a few additional specials (like this week’s bagel and lox and autostrada — salami, provolone, spicy cauliflower). The lox at Speak is not smoked salmon; but a belly-style lox prepared by Schulte and sliced thin. The salmon has a salty bite and is served on bagels from Meshuggah Bagels [see the Flatland story from earlier this year here].

Each sandwich comes with a bag of chips and a pickle (made in house with a brine of garlic, dill, salt, sugar, water, vinegar and chilis). Speak also serves potato salad, cole slaw, and pasta salad. Uncommon Stock’s soups are available, including matzo ball soup. 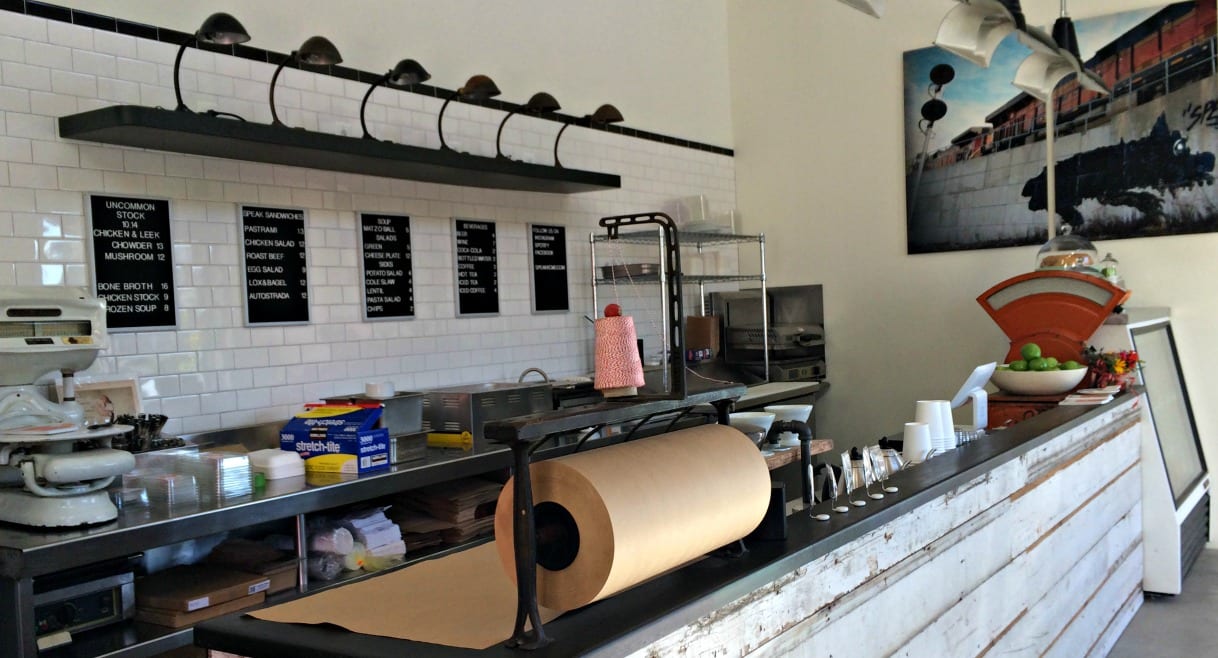 Like the menu, the deli’s décor is a mash-up of classic and modern elements. The prep counter is framed with white subway tile and the rotating menu board is white letters on a black background, invoking a concession stand.

Odds are most of Speak’s traffic will be carryout, as the only seating is six black stools line a counter along a front wall. That’s where you can sit down with a sandwich and a beer (currently Boulevard Pale Ale) or coffee (Alchemy cold brew) from the kegerator behind the counter. Speak also has a single black bookcase lined with sundry items (Repetition Coffee beans, Bird Hill honey) for those seeking an impromptu picnic.

Over the next few months, Schulte will look to add a series of new options for diners. He’s working on the permit for slicing and vacuum sealing meat, so customers can get a pound of pastrami to go. He’s also bought a vintage hot dog roller and bun steamer and is toying with the idea of Sausage Saturdays where Speak would offer a sausage special.

In the adjacent kitchen for Uncommon Stock, Schulte envisions an eight-person table sitting in front of the open garage doors with a view of the Boulevard Brewing Company. The wooden tabletop that fits over the stainless steel prep table leans against one wall waiting for that menu to be developed. Zinn is considering offering an upside-down tea on Friday afternoons with small bites and sparkling wine (Speak does have a full liquor license, so cocktails could be a possibility.).

Speak is open from 10 a.m. to 4 p.m. Wednesday through Saturday.