A Quick, Clickable Roundup Of Health News From Our Region — And Beyond — For The Third Week Of October

Nick Fugate (center) and his parents, Julie and Ron, have been adjusting to life on Kansas’ Medicaid waiting list for the developmentally disabled. (Photo: Alex Smith | Heartland Health Monitor)
Share this story

At his apartment in Olathe, Kansas, 42-year-old Nick Fugate catches up on washing dishes and remembers the 22 years he spent doing it at a local hotel, trying to stay on top of a never-ending-stream of plates, glasses and silverware.

Nick recalls minor annoyances like the long days, the hot kitchen and his fingers pruning in the water. It could be tedious, but he says he didn’t really mind.

“Just as long as I got the job done, it was fine,” Nick says.

The job wasn’t glamorous, but Nick’s father Ron Fugate says it was the key to the self-reliance he wanted for his son ever since Nick was born with an intellectual disability.

“From our perspective, having a job, being independent, participating in the community, paying taxes, being a good citizen – that’s a dream parents have for their children in general,” Ron says.

— Alex Smith is a reporter for KCUR, a partner in Heartland Health Monitor, a reporting collaboration that also includes KCPT and KHI News Service, an editorially independent initiative of the Kansas Health Institute.

The employees of Cornerstone Supports gathered earlier this month at a house in Olathe with their clients — adults with intellectual and developmental disabilities — to plan their last day together.

Cornerstone, based in Olathe, will close later this month, and its 19 clients will have to find other companies to help them with daily tasks so they can stay in their own homes. 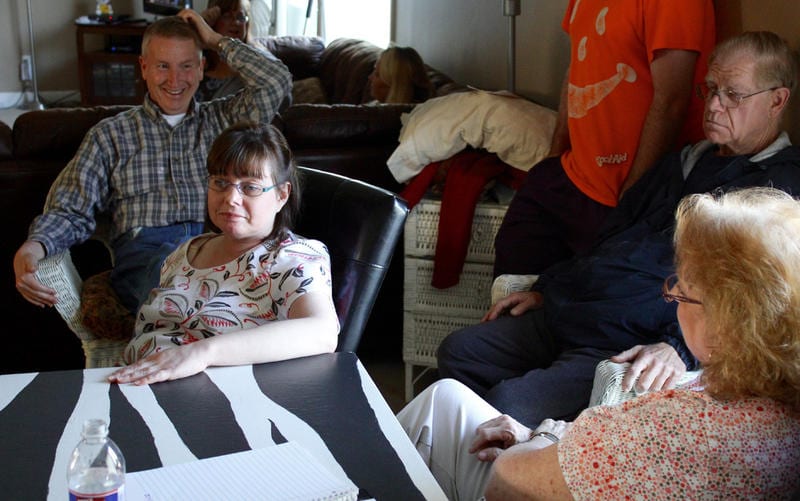 The regular gatherings at the Olathe house where three Cornerstone clients live will end Oct. 28.

“We should do something,” said Brandon Thompson, one of the clients.

“What do you want to do?” asked Vickie Vermillion, Cornerstone’s owner.

“A cookout or something,” Thompson said.

As they planned the barbecue, another client sitting nearby started crying softly. Vermillion stopped to comfort him.

As part of a federal quality improvement effort, Kansas hospitals are reducing the odds that patients will get certain types of infections.

And while that effort provides information on hospital quality throughout the state, finding information about the quality of care at individual hospitals remains a challenge.

The Kansas Healthcare Collaborative runs a hospital engagement network that includes 106 of the state’s 133 hospitals. Through a federally funded program, hospitals in the network are working to reduce patient harm and hospital readmissions by sharing their best practices.

Network hospitals aimed for a 40 percent reduction in instances of patient harm from September 2015 to September of this year, said Michele Clark, the collaborative’s hospital engagement network program director. While hospitals in the network weren’t able to reduce all types of patient harm by that much, infections related to central lines that deliver medication and fluids fell 55 percent and urinary tract infections from catheters were down 28 percent, she said.

— Meg Wingerter is a reporter for KHI News Service

A Kansas Cabinet secretary was scheduled to speak about the state’s plans to use technology to improve human services at a weekend conference at Harvard University.

Susan Mosier, secretary of the Kansas Department of Health and Environment, was to address the state’s plan to use data systems to find gaps or redundancies in the social services Kansans receive during the Health and Human Services Summit. She was scheduled to take part in a panel with three others during the summit, which was developed by a research initiative in the Technology and Entrepreneurship Center at Harvard.

The ultimate goal of the state’s technology plan is to make it easier to meet a family’s needs by connecting systems such as Medicaid, under KDHE, with others like the Department of Commerce’s job training programs and educational assistance through the Kansas State Department of Education, Mosier said during an interview last week.

“When you fill those gaps, you can really make a difference in the trajectory of a person’s life,” she said.

Mosier described a potentially 10-year technology plan in Kansas that started with automating enrollment in Medicaid. The process hasn’t been smooth thus far, however.

California, the first state to legalize medical marijuana 20 years ago, will vote in November on whether to legalize recreational use for people over the age of 21. With 39 million residents and the world’s 6th-largest economy, California’s status could resonate throughout the country. NewsHour Weekend Special Correspondent Mike Taibbi reports.