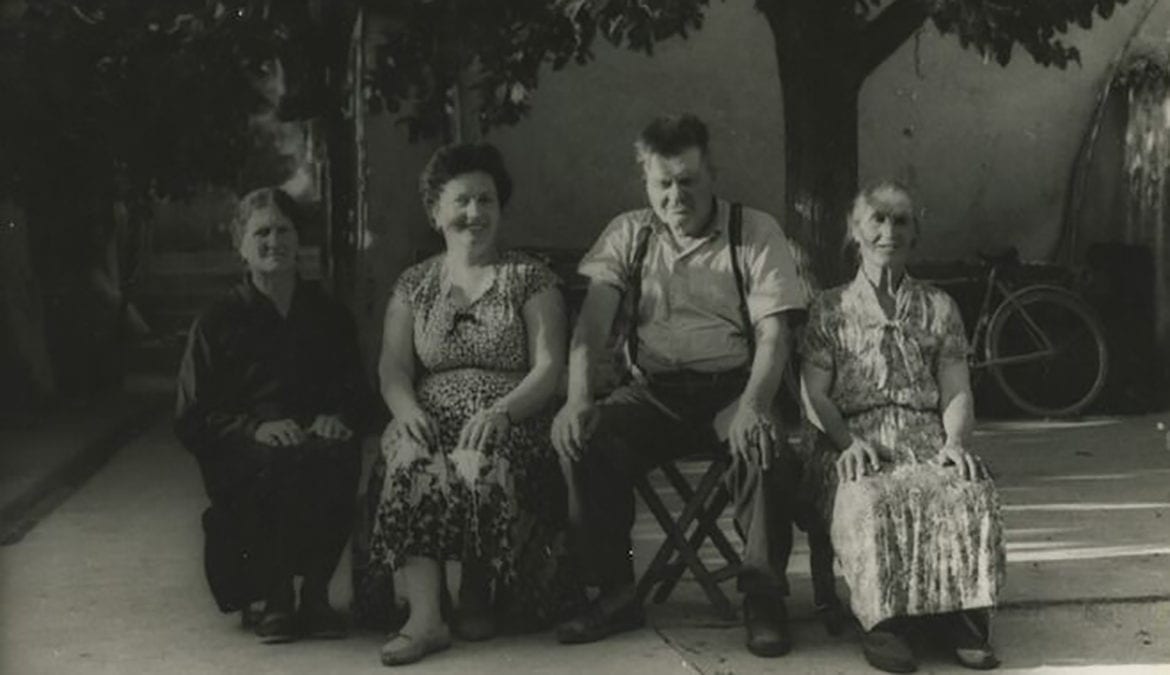 This photo was taken In the courtyard in Busoler, Istria, around 1960. Lidia Bastianich’s Grandpa Giovanni and Nonna Rosa are on the far right. (Courtesy of Lidia Bastianich)
Share this story

As migrant children were recently being separated from their parents at the U.S.-Mexico border, Lidia Bastianich’s own refugee story has an eerily familiar ring.

The accomplished Italian chef and restaurateur takes a break from award-winning cookbooks to unpack her own immigrant story in the just-released “My American Dream: A Life of Love, Family, and Food.”

The first part of Bastianich’s autobiography focuses on her idyllic childhood growing up on a tiny farm in Busoler, Istria, as she tagged along beside her beloved maternal grandmother, Nonna Rosa. 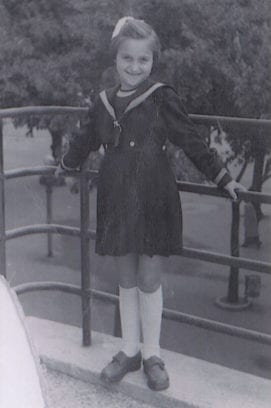 Bastianich, who was born in the nearby city of Pola (now Pula in Croatian), fled communist rule with her mother, father and older brother in 1956 when she was 9 years old, leaving behind Nonna Rosa and other family members. As refugees, the family spent two years in San Sabba, a former concentration camp in Trieste, Italy.

“Suddenly, my family was being divided. Other families, too, were being divided by gender. The men and boys were ordered to go into one area, and all the women and girl were ordered into another,” she writes. “I had no idea what was going to happen next, and I didn’t know when I was going to see my father and brother again.”

Once separated, Bastianich and her mother were soon reunited with the rest of the family, but she still remembers the wait at the camp for a country to agree to take them in.

Catholic Charities helped the family re-settle in New Jersey, and on each new visit to the social worker, Lidia’s proud mother, Erminia, now 97, tried to repay the agency for the money spent. But each time her mother was told the family’s successful integration into their new home would be repayment enough.

Bastianich learned English by watching TV and got caught up, then excelled, in her school work. By age 18, she took the oath to become a U.S. citizen. She married an Italian immigrant, had a family and found success in the restaurant business.

Today, at age 72, Bastianich is the matriarch of a far-reaching restaurant empire that includes four restaurants in New York City plus additional ones in Kansas City and Pittsburgh, as well as partnership in Eataly, an artisanal Italian food hall with locations in the U.S. and Sao Paul, Brazil.

Bastianich wrote her 334-page autobiography with a ghost writer, but the optimistic and nurturing grandmotherly tone that lures thousands to tune into her Emmy Award-winning PBS cooking show is present in her memoir.

Bastianich says she is grateful for the opportunity she and her family were given, and she worries about the root of the border debate, a complex tangle of social, economic and cultural tensions that are creating a global refugee crisis.

“My whole life, people have said ‘Don’t you have regrets? Aren’t you angry?” Bastianich said during her recent visit to Lidia’s Kansas City. “You know, I’m not…I feel like almost grateful. It made me who I am ultimately. It ended up well, and yes, it was hard at the time, but it instilled a lot of deepness in me that I wouldn’t maybe have had otherwise.” 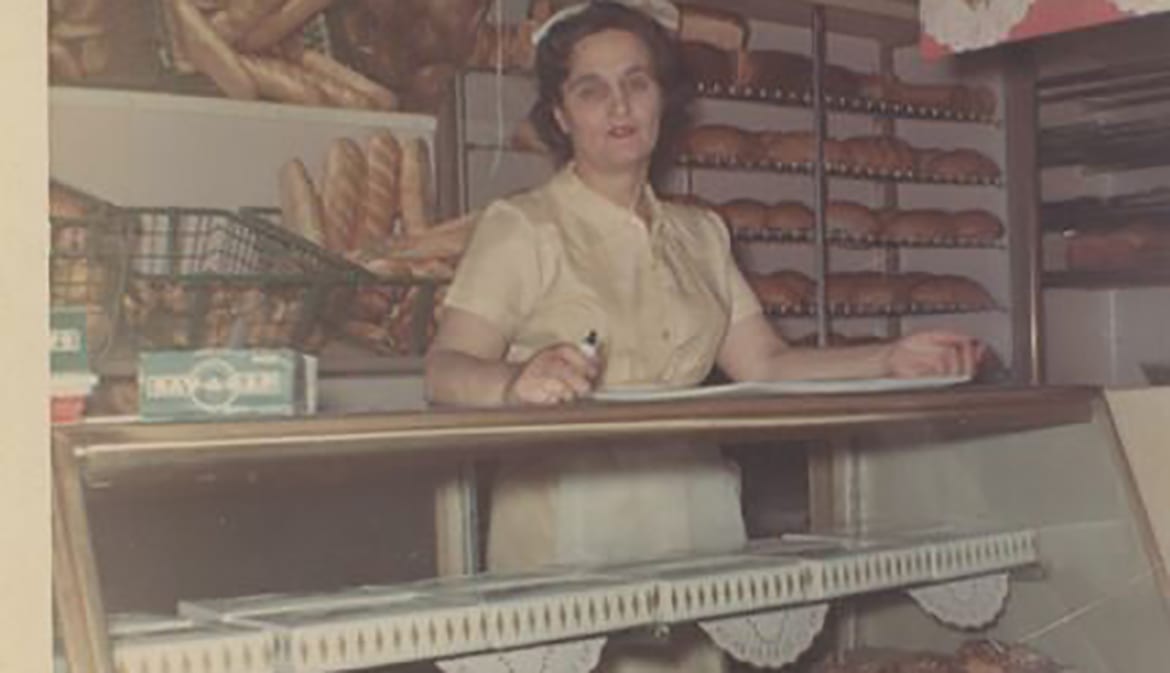 In the book, there are lighter moments, too, like when the chef best known for introducing Americans to authentic Italian flavors with an Eastern European accent — beans, sauerkraut and cabbage — revels in the newfound flavors of Spam, Wonder Bread, instant cake mixes and processed American cheese.

“Sometimes I would leave the door to our apartment open so everyone in the building could smell that I was baking. It was food that made the first connections between our neighbors and us. I would sit on the steps outside our apartment and share some of those baked goodies with my little cousin Diana and any other kids who would show up,” she writes. “Just as in Nonna Rosa’s courtyard in Busoler, food was always shared.”

Bastianich recalls in rich detail moments from an early childhood spent tending the garden, foraging for wild asparagus, baking bread in the communal oven, climbing trees to steal their fruit or caring for the goats.

When she realized that she would not going back to her old life, “I started taking snapshots,” she said. “I really made an imprint in my mind.” Years later, when she could finally return to Busoler, she said she found the details she archived in her memory were usually accurate, even if the scale of things from a child’s perspective had appeared larger. 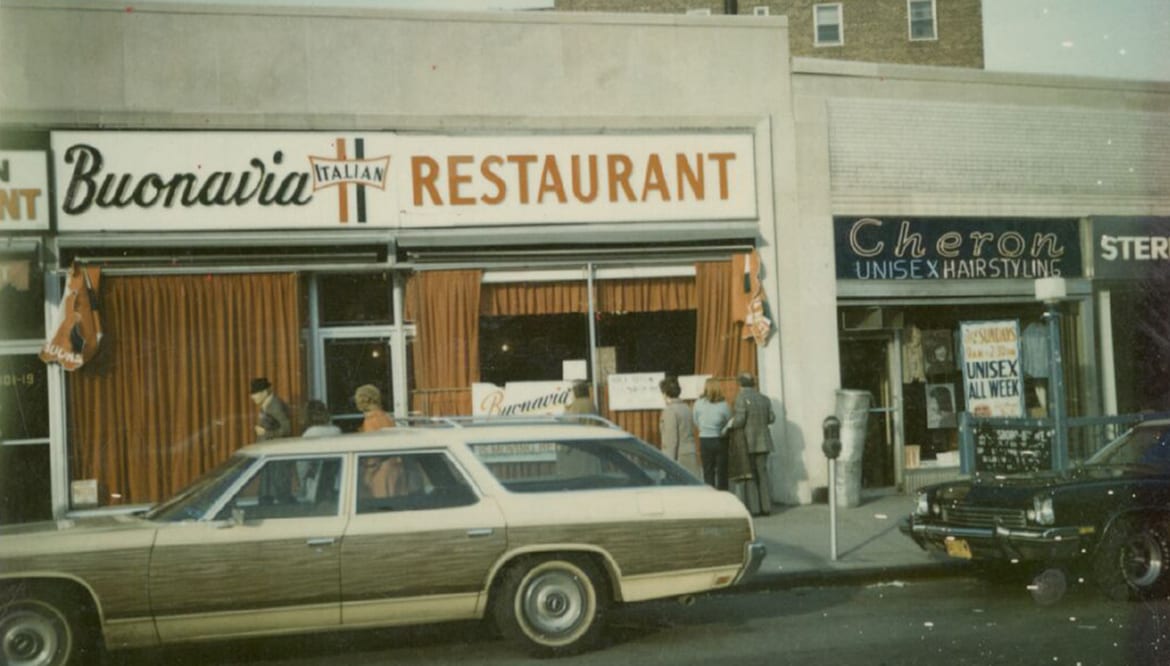 Bastianich built her culinary career during a time when American diners were enamored with French nouvelle cuisine, but she stuck to the rustic cuisine of her childhood, explaining she was never interested in mirepoix or tall toques.

“My style is home cooking,” Bastianich said. “I never felt I had the right to change Italian food. I was the conduit to America, which is my new country.”

She adds it’s a privilege to live and work in the United States, one that comes with rights, as well as responsibilities for the immigrant.”It’s a two-way street,” she insisted.

Asked for her opinion on what took place at the southern border of the United States, the once terrified refugee child, now mother and doting grandmother, replied: “Children should never be separated from their parents.”

-Jill Silva is a James Beard-award winning food editor and writer. You can follow her at @jillsilvafood.

A Look Inside Her Latest Cookbook, 'Celebrate Like an Italian'

The Son in 'The Butcher's Son'