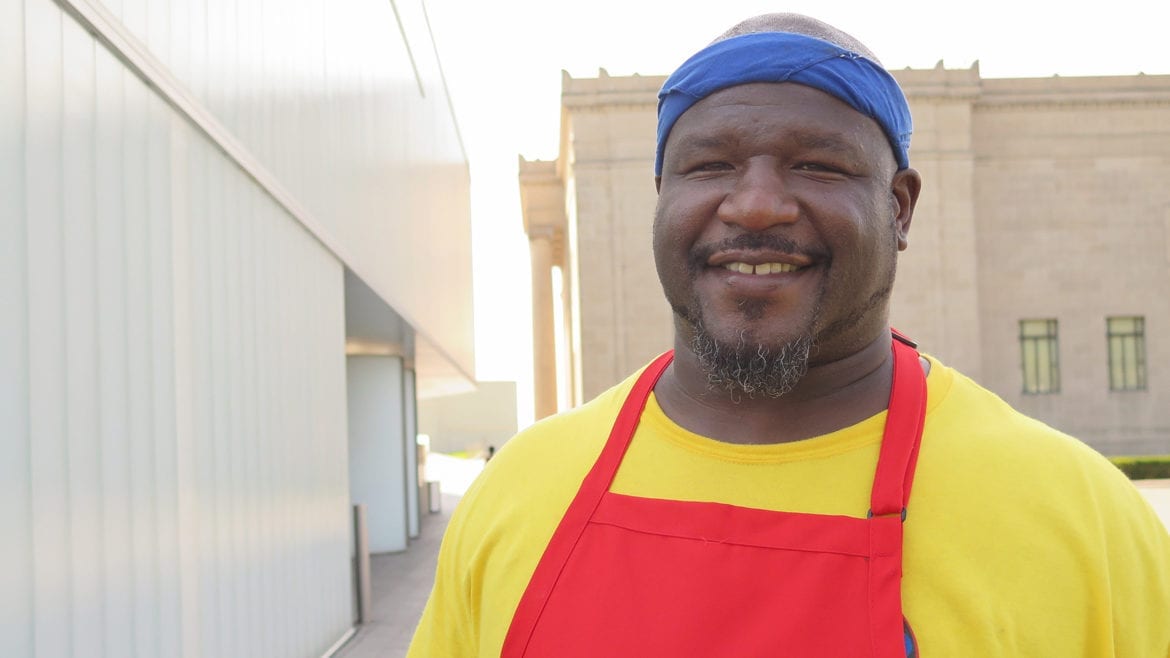 Brandon Simpson and his truck Jazzy B's will be one of the 10 food trucks competing at this weekend's Brew-B-QUE. (Pete Dulin | Flatland)
Share this story

Food truck entrepreneur Brandon Simpson, owner-operator of Jazzy B’s, has plotted a route to open his first full-service restaurant in Lee’s Summit. He plans to open the restaurant in the former location of Pork-N-Pit BBQ (1803 N.E. Colbern Road) by the second week of June, if plans and permits proceed according to schedule. Meanwhile, Simpson will continue operating his food truck in and around Kansas City for lunch, catering and special events.

Simpson launched his food truck concept in 2010 after developing a signature style of barbecue and the “jazzy side” of his fusion menu.

Other dishes will emphasize a Cajun influence with specials such as etouffee, jambalaya and an occasional crawfish and shrimp boil.

“Lee’s Summit and the east side of the area doesn’t really have Cajun food,” Simpson said. “My food truck doesn’t have anything really spicy, so we’ll have spicy dishes at the restaurant to bring some of that flair.”

Eventually, Simpson would like to offer some farm-to-table-style dishes, but he plans to slowly test the market with his menu items first. The restaurant will seat 50 people. The atmosphere will have a “down-home backyard family-style barbecue” feel, Simpson said. Its decor will reflect Simpson’s bold, colorful style, as demonstrated by his purple truck with the prominent saxophone on the side.

“I was looking at the place before I started a food truck,” Simpson said. “I like the location. I’m from South Kansas City and live close by the building. Also, there’s no competition here.”

The restaurant represents the culmination of a dream that began in 1998, when Simpson wanted to open a venue based on his concept after graduating from Northwest Missouri State University. He developed a business plan and determined that the projected cost would surpass $1 million.

Instead, he worked jobs in construction and sales for many years. When he was laid off from work in both fields, Simpson revisited the restaurant concept. Rather than establish a brick-and-mortar operation, he opted for a food truck to prove his concept and assume less overhead while starting the business.

Two years ago, Simpson co-founded the Kansas City Food Truck Association with Michael Bradbury, the owner of The Funnel Cake Truck. They collaborated to promote events, provide support and educate the public. Simpson also has gained notoriety as a competitor on an episode on the Food Network’s show “BBQ Blitz.”

With six years of food trucking experience, Simpson is considered a veteran in the local industry. He has even taken his expertise and packaged it into a food truck seminar, The Business of Food Trucks, in collaboration with the Mid-Continent Public Library’s programming. The multiweek course provides key lessons, information, resources and Simpson’s knowledge to prospective and novice truck operators.

Now, he has committed to taking the plunge and opening a full-service restaurant, a type of business that involves its own challenges. Simpson anticipates that most customers will be carry-out with some dine-in regulars. He also is considering weekend breakfast or brunch service.