An Immigrant and Her Family’s Persistence: Why the Pandemic Didn’t Shake the Spirits of These Lee’s Summit Restaurateurs 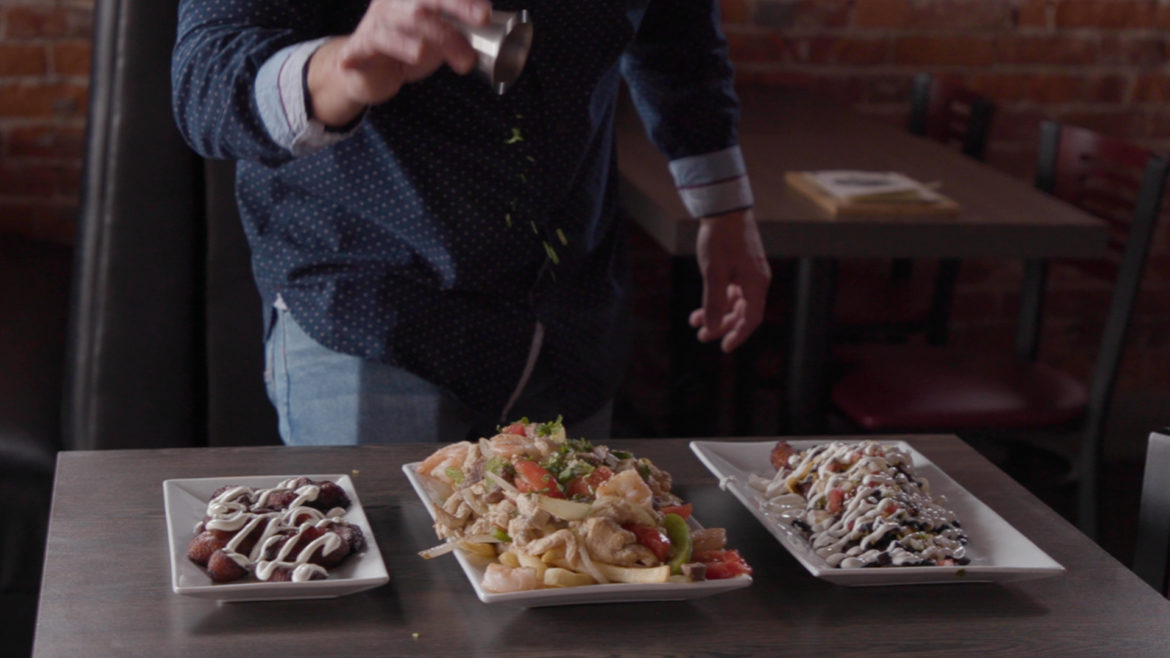 Sitting in fear was quickly off the menu for Fanny Ruiz de Chavez — told less than two months after her Lee’s Summit restaurant’s 2020 grand opening that she’d need to close down because of COVID-19 restrictions, she recalled.

“I remember being sad, scared for less than an hour. And then I said, ‘I have to make it.’ I have to make it. … I remember praying and saying, I have so many people depending on me. At the time, I didn’t care much about the debt because I knew we could (make it) work,” the founder and co-owner of Sabor Latino said.

This multimedia story was reported jointly by Startland News and Flatland. Startland provided the written story, while Flatland created the accompanying video.

She also wasn’t alone in the unknown, she noted, as she leaned on her family, friends and faith to keep going. Her brother, Julio Stredel, and stepson, Reggie Gray — co-owners of Sabor Latino — stood alongside her every step of the way.

“When the pandemic hit, let me be honest, (I was) heartbroken, scared,” Gray said. “I didn’t know what was going to happen next. … Fanny, I call her the boss lady, one thing about her (is that) she is so optimistic, so positive. So throughout the whole thing, it was all about taking care of our customers, putting out a good message, staying focused on the plan.”

The plan: keep pushing to innovate and continue providing the best, yet safest, experience for customers.

“Sometimes having a dream is not the only thing,” Ruiz de Chavez said. “You have to be persistent.”

Ruiz de Chavez immigrated to the United States from Venezuela when she was just 18. Her initial plan was to return home to be with her family, but after meeting her now-husband, she decided to stay in the U.S., she recalled.

“As an immigrant, it’s not easy,” Ruiz de Chavez said. “I know a lot of people have the same feelings that I had going to a different country. (It’s a) different language, different culture, different food and then adjusting to that is not easy. … For me, it was missing my family.”

Once she became a U.S. citizen in 2000, Ruiz de Chavez petitioned for her family to come join her in the U.S. Because of issues with the Venezuela government, reuniting with her brothers and sister took 14 years, she said.

In the meantime, Ruiz de Chavez decided she would bring a piece of home to herself by opening Sabor Latino’s first location in 2010. It was a small space, only open Wednesday through Friday for lunch. But as she saw more people enjoying her cooking, she continued to upgrade the business.

Stredel helped run Sabor Latino’s third location, and an investment from Gray allowed them to move into their fourth and current location in downtown Lee’s Summit.

The Lee’s Summit business has been a dream come true, Ruiz de Chavez said as she looked across her restaurant, but the true achievement comes from getting to share the experience with the people she loves.

Although several of Ruiz de Chavez’s family members still reside in Venezuela, she said she stays hopeful in her thoughts and prayers that one day she will see them again.

Gray also is no stranger to persistence. In his early twenties, Gray became a real estate investor, making his first million at 25. For a few years, he felt like everything he touched turned to gold, he said, but the Great Recession in 2008 caused him to lose everything.

His fall from the top sparked years-long depression — an affliction hidden from most those around him and even himself, he noted.

“A year later I got married, and my wife started telling me about mental health. Some of the actions I had were very evident of someone who was going through a depression,” said Gray, who is married to Ruiz de Chavez’s stepdaughter, Teresa.

The stigma around talking about mental health, especially for men, prevented Gray from understanding what he was going through. Now — to be “the best Reggie” he can be — Gray prioritizes his health by exercising and going to therapy.

So when economic disaster struck for a second time with the COVID-19 pandemic, Gray had the resources in place to keep pushing, he explained. And this time around, he had a baby son to think about.

“… That’s what life does, it throws curveballs,” he continued. “I’m excited to be a father and be able to teach my young one about life and about the good times and the bad. Because, if you live long enough, the bad times will come. It’s how you act when those times do come.”

Experiencing a ‘Taste of Latin’

The menu continually rotates to highlight the variety between cultures and keep the dishes fresh, they said, noting customers are invited to provide feedback and help shape the offerings. A customer once came in and mentioned she was going to Peru, Ruiz de Chavez recalled, so they served her lomo saltado — a traditional Peruvian dish.

“It’s that experience of teaching and engaging [with] people,” she continued. “I like to ask people about their seasoning, if they liked the way we season, because it’s a matter of adjusting.”

Click here to check out the menu at Sabor Latino.

Customers can call the restaurant ahead of time to make a “special reservation” for celebrations, where Ruiz de Chavez will act as the head chef and make a surprise, off-the-menu meal. The only things she asks about are allergies and dietary restrictions.

“Like next week we have a reservation for a birthday party,” she said. “They don’t know, but I’m going to make a cake for them, [and] I’m going to put [out] a ton of balloons.”

Ruiz de Chavez, Stredel and Gray all strive for Sabor Latino to go beyond the traditional restaurant experience and make everyone feel welcome, they shared.

“It’s all about making sure that customers have a great experience from the time they step foot [in the restaurant] until the time they leave,” Gray said. “They’re our family.”