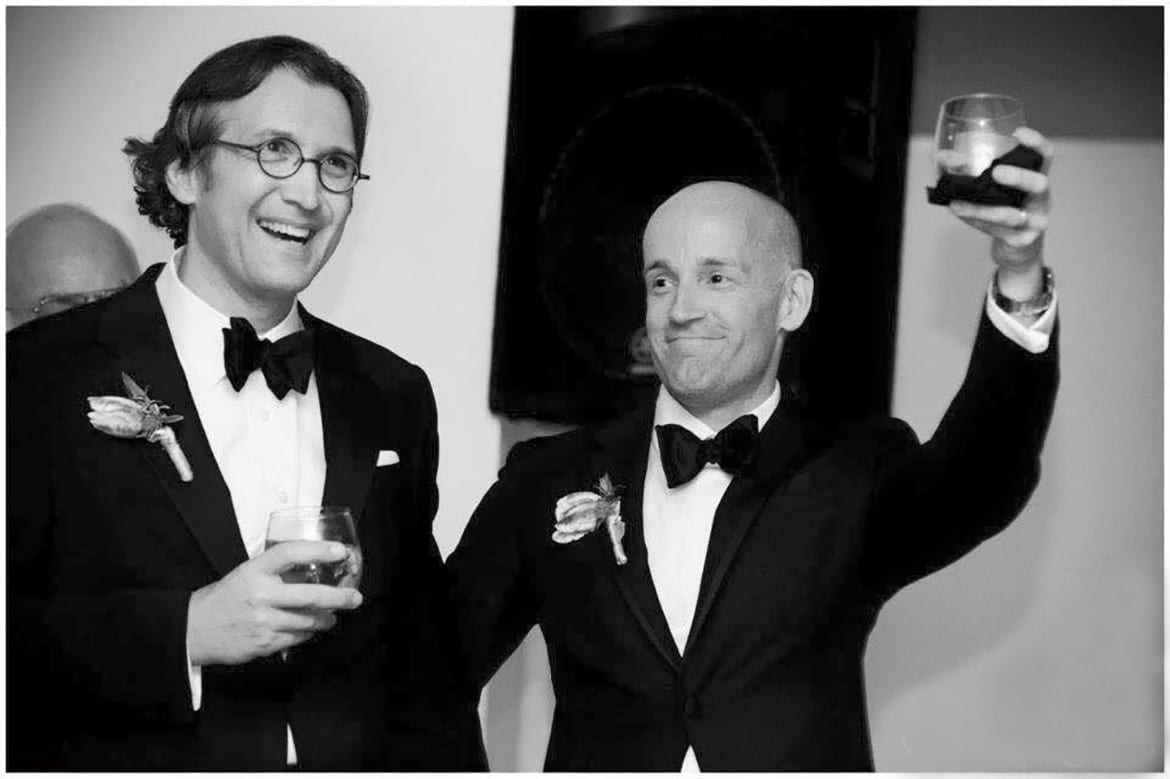 Doug Anning and Kirk Isenhour at their commitment ceremony in the the Episcopal Diocese of Kansas in Jan. 2013. The Anglican Communion has censured its American branch, the Episcopal Church, for sanctioning same-sex partnerships such as this one. (Photo: Elaina G Photography)
Share this story

As Doug Anning and Kirk Isenhour turned to walk up the aisle after an Episcopal blessing of their same-sex commitment to one another, the packed church erupted.

I have never seen a sanctuary full of such joyful people. They were applauding, shouting, cheering, even crying. At the time, I posted a blog entry about it in which I wrote this:

“The ceremony was rich with beautiful liturgical language that placed what we were doing in the context of Christian faith. And it was full of gorgeous music, some especially written for this occasion. In the end, it was exactly what the church should be doing to honor love, promote commitment and bless the lives of its members.  It’s what our civil authorities should be doing, too. . .”

What we had been part of that day in January 2013 was the first use of the “Witnessing and Blessing of a Lifelong Covenant” liturgy in a ceremony done in the Episcopal Diocese of Kansas.

It wasn’t a marriage, though to Doug and Kirk, who had been a faithful couple for more than 20 years, it felt like it. But it was a way for the Episcopal Church — led that day by the then-rector of St. Michael and All Angels Episcopal Church, the Rev. Gail Greenwell, and by Dean Wolfe, bishop of the diocese — to recognize Doug and Kirk’s mutual commitment and the promise to love and support one another for their lifetimes.

It was, in other words, just the kind of open and affirming action supporting the liberation of the entire LGBTQ community that recently moved the primates (chief bishops) of the worldwide Anglican Communion to censure its American branch, the Episcopal Church, and punish it in various ways.

As the primates reported they will require “that for a period of three years The Episcopal Church no longer represent us on ecumenical and interfaith bodies, should not be appointed or elected to an internal standing committee and that while participating in the internal bodies of the Anglican Communion, they will not take part in decision making on any issues pertaining to doctrine or polity.”

(Those two dioceses are part of 110 dioceses in the Episcopal Church, which has a membership of about 2 million people in the United States and 13 other countries.)

As Bishop Marty Field of the West Missouri diocese noted on Facebook, “it’s my belief that local parishes and congregations probably won’t see much change or impact from this decision. It’s largely a matter internal to the structures of the Communion and far removed from the lives of most local faith communities.”

And this statement from Bishop Wolfe of the Kansas diocese called the leaders’ action “a familiar rebuke of The Episcopal Church for faithfully attempting to follow the leading of the Holy Spirit in our context through the full inclusion of gay, lesbian and transgendered persons in the Body of Christ.”

The Episcopal Church is now free to offer what it calls the sacrament of marriage to gay couples. And it is doing just that, as are many other faith communities in the U.S. because of last year’s Supreme Court decision legalizing gay marriage in all states.

So what is at the root of the dispute between the Anglican Communion and the Episcopal Church? How one reads the Bible. The Communion, in its recent sanction statement, said this: “The traditional doctrine of the church in view of the teaching of Scripture, upholds marriage as between a man and a woman in faithful, lifelong union. The majority of those gathered reaffirm this teaching.”

But many in the Episcopal Church, including its leaders, have concluded that the Bible essentially has nothing to say about homosexual orientation and should therefore not be used as a weapon to oppress gays and lesbians. I have recorded my own journey to that same conclusion in this lengthy post on my “Faith Matters” blog.

One day, I think, the Anglican Communion and, indeed, all of Christianity will come to that conclusion and welcome all people to participate in the full life of the church, including marriage. But it won’t be next week. These changes take time, as we’ve seen in previous church culture wars over whether the Bible justifies slavery or whether women should be ordained (the Episcopal Church did not begin ordaining women until the 1970s).

— Bill Tammeus, a Presbyterian elder and former award-winning Faith columnist for The Kansas City Star, writes the daily “Faith Matters” blog for The Star’s website and columns for The Presbyterian Outlook and The National Catholic Reporter. His latest book is Jesus, Pope Francis and a Protestant Walk into a Bar: Lessons for the Christian Church. Email him at wtammeus@gmail.com.