Church Without the Dogma

Helen Stringer, Founder of Kansas City, Oasis, welcomes the congregants to Sunday's weekly service at the Tony Aguirre Recreation Center in Kansas City. Many congregants said they still felt the need for fellowship after giving up on religion. (Photo: Daniel Boothe | Flatland)
Share this story

Fewer people believe in God these days, and now there is a local church for it. Just don’t call it church.

Members of Kansas City Oasis, which serves atheists, agnostics, and “everything in betweens,” gather every Sunday at the Tony Aguirre Community Center on Kansas City’s West Side.

The group has about 200 participants, and about half of them were on hand earlier this month for the service, which featured music, reflection, announcements, a message, coffee, and fellowship with like-minded non-believers.

Nationwide, according to the Pew Research Center, the number of American adults who don’t believe in God doubled to about 10 percent between 2007 and 2014. And, about one-fifth of the adult population are categorized as “nones,” people who are atheists, agnostics or “nothing in particular.”

Helen Stringer founded Kansas City Oasis two years ago to fill the void left after she cut ties with her Christian beliefs.

“When you are looking to connect in a multi-generational setting, with shared values, those connections are pretty much owned by religious communities,” she said. “So I thought, ‘Why can’t we be doing this, minus the dogma and exclusion?’”

Her research led her to Houston Oasis, where founder Mike Aus had established six core values for his group:

Aus now has plans to expand to Tacoma, Washington, “and we get more and more inquires all the time,” he said.

Flatland caught up with Aus when he visited Kansas City earlier this month, covering topics like the history of Oasis and his theory of “radical acceptance.”

Can you take me back to the beginning, stepping down as a minister after 20 years, to the formation of Houston Oasis?

After I left ministry, I was approached by friends that have also been in the church world. A couple of them said they were feeling the same way I was, that they could no longer affirm the dogmas of religion. But we were missing a lot of the good things that came from being part of a church, the sense of community, support, ability to get together to do volunteer projects, social events, all the great positive things that religion provides for people. So ultimately a group of a dozen or so of us started meeting over brunch once a week on a Sunday in the summer of 2012 to kind of put things together. We really didn’t know what we were doing, it really came out of a deep personal need of a few people to form kind of an intentional community without the dogmas and theology of religion. We came up with this idea that it would be a hybrid of a Tedx talk and a house concert. Our first Sunday, 25 people showed up, and we were ecstatic. We thought, “Wow, well, if 25 people showed up we can continue to do this,” and it just started to grow and we have been at it ever sense.

Community  relationships, fellowship and celebrating the human spirit are all key components to the Oasis mission. Will you speak to the importance of community for everyone regardless of religious persuasion? 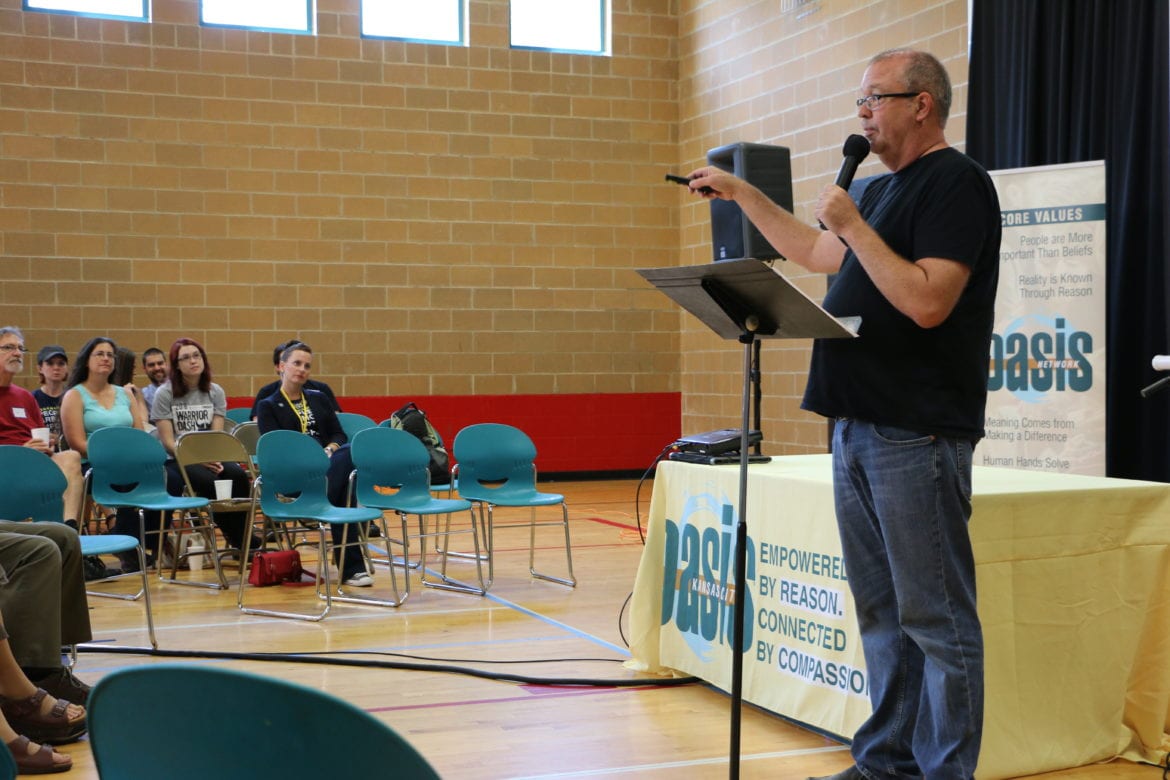 Many faiths require you to go through a ritual of some kind, whether it be baptism, an alter call, circumcision, confirmation, or a public declaration of faith. Is there any kind of ritual, prayer, creed or membership that Oasis requires, and is not believing still a belief?

The closest we come to that would be our core values. For us, the core values are really the main thing that ties us together. It is funny, people make memes with them, hashtags, t-shirts, the core values have really taken on a life of their own. Some people like to say to me that “People are more important than beliefs” is a belief’ and I say, “I’m OK with irony.”

About one-fifth of all Americans are considered “nones” by the Pew Research Center, meaning they are atheists, agnostics or nothing in particular.  And there has been a slight uptick in the number of Americans who do not believe in God. What does that say to you about the degree of religiosity in the country today?

Well, I try to stay away from that as much as possible, I mean, I have read the same studies that you have. The percentage of religiosity decreases even more the younger you get on the spectrum. Looking at the figures of people under the age of 30, you find that almost a third would consider themselves to be in the “nones” category. And we see that reflected in both Kansas City and Oasis communities. Half of our board of directors are 30 and under.

While an Oasis gathering is held in a secular setting, Oasis does not condemn religion or try to convert theists into atheists. I was actually kind of surprised to learn that people of faith attend Oasis’ services.

Absolutely, we are not about attacking religion. We don’t say that you have to be a non-believer to hang out with us or be part of Oasis. We really want to be that community of radical acceptance. Radical compassion. I am absolutely convinced, and this is based solely on anecdotal evidence in my own life, that there are significant numbers of people that are still in church today that really don’t buy the dogmas and the theology, but they will participate in church life because that need for community is so great.

Daniel Boothe is a reporter for Kansas City Public Television. To reach Boothe, email him at dboothe@kcpt.org