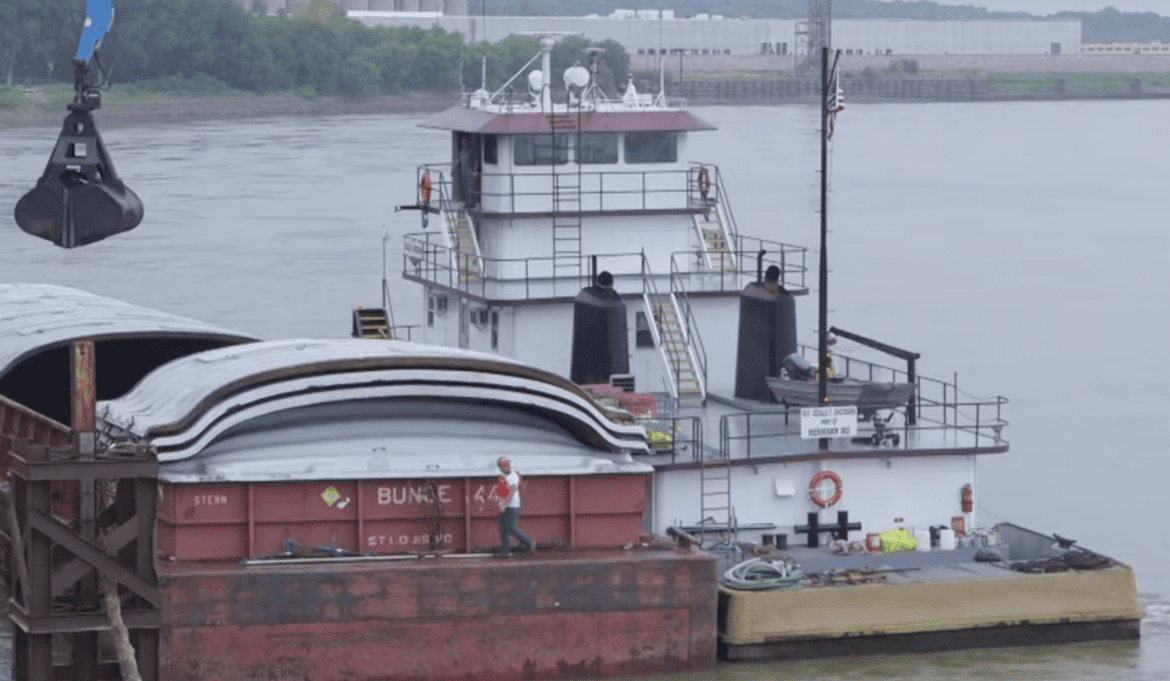 The view from Kansas City’s old river barge terminal in the West Bottoms offers a panoramic sweep of the downtown skyline, and a glimpse of just about every mode of transportation.

Planes fly in and out of Wheeler Downtown Airport just across the Missouri River, and trains and trucks haul freight over the Broadway and Hannibal bridges.

But there aren’t many barges plying the Missouri’s swirling currents below, and that’s something Michael Collins wants to change.

“The history of river navigation in Kansas City is about to begin again,” he said.

That’s why Port KC is offering media tours of the terminal at 1724 Market St. today (Wednesday). Port KC took over the terminal in 2012 and has since worked to renovate it.

As Collins spoke Tuesday, the Gerald F. Engemann, a 2,500-horsepower river tug out of Hermann, Mo. was docked at the terminal, hugging a barge-full of mill scale, a byproduct of steel milling that can be used in asphalt and cement.

It was the first docking at the terminal since 2007.

The terminal was first opened in 1935, but it fell dormant in the 1990s, when Missouri River barge traffic all but disappeared.

Port KC took over the terminal in 2012 and recently leased it to a local operator.

Collins is optimistic that activity won’t be short-lived, and hopes the terminal will eventually dock a dozen barges a month, hauling everything from mill scale to road salt.

Collins hopes to add a rail spur into the terminal soon.

Port KC, a state governmental body, is pinning its hopes for success at the terminal on increasing congestion of road and rail freight networks. Inland waterways can handle increased capacity, they said, “without the tremendous cost of building new infrastructure.”

As Collins spoke Tuesday, a massive clam-shell crane unloaded mill scale, which will be hauled by truck to a company in eastern Jackson County.

But Collins’ vision for the terminal may be uphill battle. Port KC acknowledges that the terminal is one of the few operating public ports on the Missouri River, and barge traffic remains in decline, compared to its heyday.

Competing interests over the river in recent years have sparked legal disputes and complaints from environmentalists and others over channel depths and flooding issues.

“We have not handled a barge here since 2003,” said Kevin Knepper, manager of the Big Soo Terminal in Sioux City, Iowa. “We are out of the barge business.”

Knepper said river freight is most economical when numerous terminals are operating and tugs can run up and down the river moving numerous barges. “That’s what makes the system efficient,” he said.

But things can change, he added, and river barge traffic could be viable again.

“I’m excited for the Kansas City port and hope they make it work,” he said.

A Brief History of the Missouri River's Route