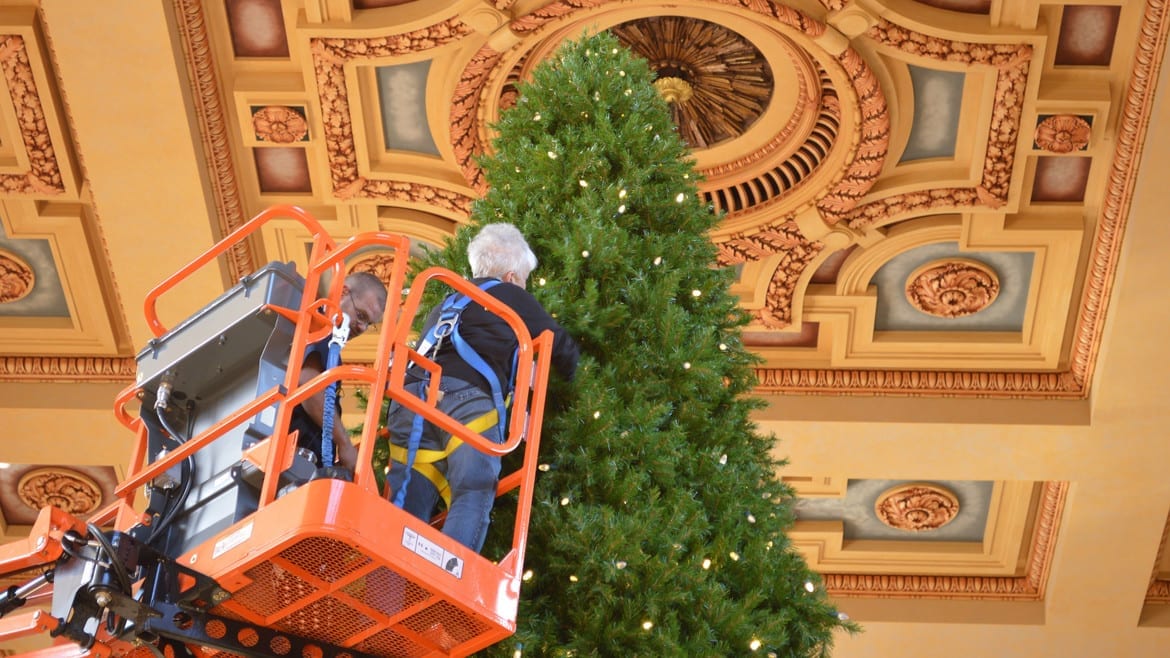 Smell the pine: Union Station's "Annual Holiday Kick Off Ceremony" is a day of festivities that includes trains, dancers, and flipping the switch on its rather tall tree. (Credit: Union Station Kansas City)
Share this story

I’ve done the math. We have now crossed off 325 of 2015’s allotted days. The end game is truly upon us! So buck up, and grab some wassail. Or at least accept the fact that more and more of your weekend options will come with “holiday” somewhere in the description.

With that in mind, why not dive into the deep end and see some lights come blazing on nearly a week before that big whoop-de-doo on the Plaza. That little historic district north of the river, Parkville, is lighting the way with two merriment-al events, Gallery of Trees tonight from 6pm to 9pm, and Christmas on the River, tomorrow night starting at 6pm. Union Station’s elegantly ginormous tree will be unveiled on Saturday, proving once again there is an upside to having incredibly high ceilings! Zona Rosa says they’re switching that district’s display on at 4pm. (Maybe it gets dark earlier up north.) And the Legends out west in KCK powers theirs up at 6pm.

You could conceivably even do a three-fer, and still make it to the opening weekend of “A Christmas Carol” at the Kansas City Repertory Theatre. The old workhorse is still going strong because, well, it works. Gary Neal Johnson rocks his Scrooge socks and the best actors in town all throw in. Plus you’ll be among the first to see how the new, improved Performing Arts Center lobby now looks a lot less like a Soviet gulag.

OK, let’s talk about music now. Because there are at the very least, three immensely recommendable options, and none reek of Yuletide cheer!

Diana Krall is a great jazz singer whose career just keeps chugging along. But on her most recent album, “Wallflower,” she reimagines an eclectic array of pop tunes from the 60s, 70s and 80s. For actually making Gilbert O’Sullivan’s “Alone Again, Naturally” worth hearing, I’d nominate her for a Nobel Prize. The singer also known as Mrs. Elvis Costello hits the Arvest Bank Midland Theatre Saturday night at 8pm.

Another kind of jazz bursts forth starting at 7pm in the atrium at the American Jazz Museum on 18th Street. The Latin Jazz All Stars are calling it “One Night In Havana.” Making the scene in retro Cuban attire earns you one free mojito. Plus, with food from Empanada Madness, you never know… Salvy might even drop by!

On Sunday at 8pm, almost exactly the same time those resurgent Chiefs take on the Chargers (there are watch parties out the wazoo) one of the best all-too-overlooked purveyors of American music takes the stage at Harrah’s Voodoo Lounge. Back in the 70s, David Bromberg played with Bob Dylan and members of the Grateful Dead, wrote a song with George Harrison, but got so discouraged with the music biz that he dropped out to make fine violins in Wilmington, Delaware. He’s back on the road again, and if there is a God, Dave will unleash “Sharon,” his 1972 quasi-hit about a beguiling tent-show dancer, “she crawls on her belly like a reptile…”

Good songwriters paint pictures with words. Sometimes good painters paint other things to make a buck. Like Thomas Hart Benton, who made the official movie poster for a number of films, including “The Kentuckian.” As part of the Benton “Hollywood” exhibit at the Nelson-Atkins Museum, this oft-overlooked Cinemascope epic from 1954, starring and directed by Burt Lancaster, will be screened Sunday at 2pm in the Atkins Auditorium.

This is also the opening weekend for Katniss’ last stand, that is, the final installment of “The Hunger Games.” (Curious to see how they handled the untimely demise of Phillip Seymour Hoffman midway through the production.) “Mockingjay, Part Two” is playing pretty much everywhere that a movie screen can be hung.

And perhaps more importantly, Kansas Citians can now see the film with the best Oscar buzz so far this year. “Spotlight” is based on the Boston Globe reporters who broke the story of sexual abuse in the Catholic Church back in 2003. It is, for now at least, showing only at the Tivoli and Glenwood Arts.

Finally, for one last gasp of autumn, I say run, do not walk to Dunn’s Cider Mill at 171st and Holmes for the best apple-cider donuts in the whole freaking world! It’s their last weekend of the year. Open 9am to 5pm (unless they run out.) Don’t say you weren’t warned.

Harry Truman and the Holocaust

Decades of Relationships Influenced His Actions